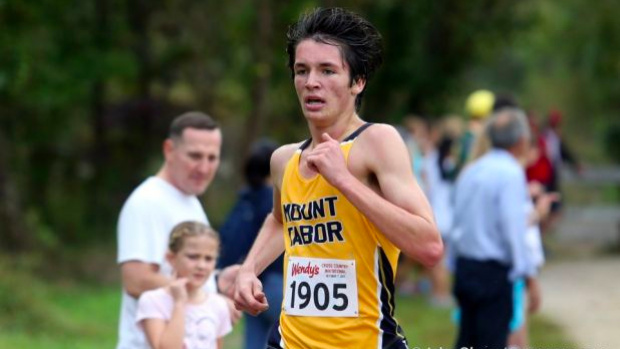 Green Hope and Mount Tabor look to put North Carolina on the map nationally tomorrow at the Manhattan Invitational in New York.  Green Hope boys come in after a strong showing at Great American last weekend where they took second and look to be the teams to beat tomorrow.

Mount Tabor boys are also coming off a big weekend after winning the Wendy's Invitational last weekend over a lot of North Carolina and South Carolina's top ranked teams.

Cameron Ponder proved that he was very fit last weekend winning the Wendy's Invitational in 15:20 setting a new PR.  Ponder looks to be one of the favorites this weekend as he will have a rematch with Dalton Hengst from Penn Relays where Hengst won while Ponder took 3rd just behind him.  Hengst was the Great American Champion last weekend clocking 14:57.  Ponder was close to running a similar, likely faster time than that back at adidas, but his legs fell out from under him over the final 400 meters and he faded to 15:31.  Josh Hoey (Bishop Shanahan), Rusty Kujdych (Neshaminy) and many others are likely to be in the mix up front as well.

Green Hope had Peyton Barish emerge as a low stick last weekend as he clocked an NC#3 time of 15:18 taking 9th overall in a loaded Great American field.  This time ranks him at #4 in the virtual meet.  Barish will look to battle with Ponder to be NC's top finishers.  Michael Moerk (Mt. Tabor) is often slightly overshadowed by his teammate, but he's been having a really strong senior year holding the 10th best PR in the Manhattan field of 15:28.  Moerk will look to bounce back from a slightly off day at Wendy's.

Green Hope rank out as the top team in the virtual meet scoring 94 points with plenty of schools in range that are expected to challenge like LaSalle College High School, Christian Brothers Academy, Salesianum School, Downingtown West and Mount Tabor.  Even though Green Hope ran well at Great American last weekend I still don't think it was close to their true potential.  With three solid middle distance guys in their top 5 in Ian Delgado, Finn McBride and Ares Epps, the 4K distance might favor them a little more than other teams.  According to the virtual meet Green Hope's 7th man has a better seasons best than every other schools 5th man in the field.

In 2015 Jeremy Brown lead Broughton to a 2nd place team finish clocking a 12:21.  Brown took 2nd overall as both the individual and team performance are NC's best at the meet historically.

Mount Tabor girls will race in the Varsity A race where they're amongst the top teams in the field as they look to battle with Cornwall and Bethlehem Central for the team titles.  Frances Whitworth looks to be one of the top individuals in the field with a PR of 18:49 for 5K