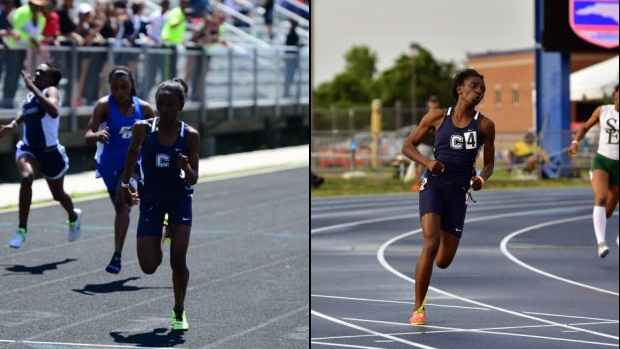 Tamara Clark (High Point Central) certainly came into high school and immediately proved she was going to be a force to be reckoned with over the next four years.  Clark posted impressive marks of 11.77 in the 100 and 24.10 in her freshman year of high school.  Clark also earned her first podium finish at the NCHSAA State Championships taking 4th place in the 200m Dash.

Over her final three seasons Clark continued to improve each year and after taking 2nd at the 2015 NCHSAA 4A State Championships in the 100, then winning the 200m Dash she solidified herself as the one to beat over her final two years.

Tamara Clark after her first individual state title at the 2015 NCHSAA State Championships.

Clark then became unbeatable at the NCHSAA State Championships.  Her Junior and senior year she won the 55m Dash & 300m Dash indoors, and swept the 100m & 200m Dash outdoors.  This indoor season she helped lead her High Point Central team to an team title with her two wins individually and leading her 4x200 and 4x400 relay teams to a state title. Clark was also crowned meet MVP for her performances.

I certainly expect Clark to climb the 100 & 200 list this summer before she heads off to University of Alabama to continue her track career.