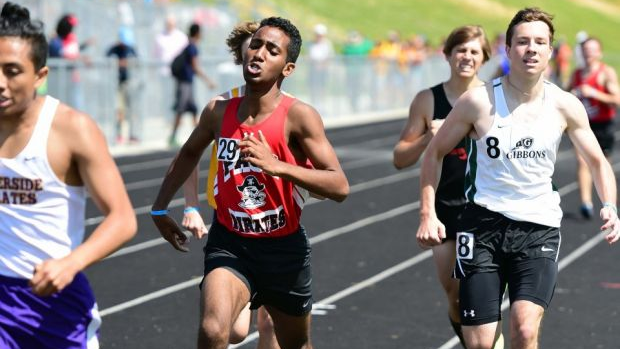 Freddie Marx, Trey Cousar, Ahmed Sinada and Ian Shanklin made up the Page DMR team that doubled back from the 4x800 earlier in the day.  Coming into the race they had an advantage on the anchor leg as Shanklin has been on fire this track season.  The Pirates would need to keep Shanklin in striking distance as they headed into anchor leg.  They certainly executed that plan to a T with Sinada, the 800 leg, getting the baton right with 3 other teams and running with Mallard Creek's 800 star Canoy Tyree handing off just behind and in second place.  Mallard Creek went out hard and Shanklin followed going through 400 in 61 seconds.  When Shanklin made the pass it he continued to gain on Mallard Creek and no one was going to catch him.  The Pirates finished in 10:30.83, just 4 seconds off the Queen City Relays meet record, winning the race by 24 seconds!  Shanklin's unofficial split was 4:17.  Page sits at US#18 in the event.