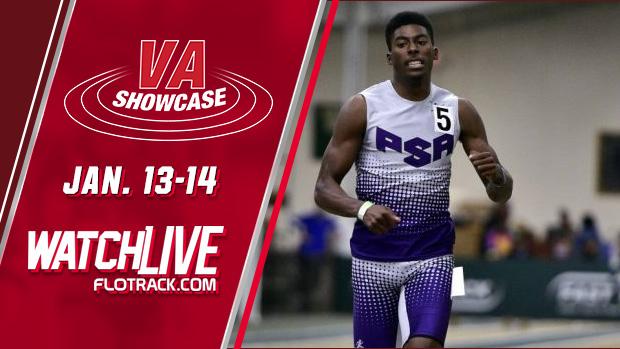 Year #1 of the VA Showcase is set to begin this Friday on Liberty University's brand new indoor track! This event will be the first of many high school races this facility will hold.  Below are the heats for the Invitational sections of the VA Showcase, North Carolina athletes are in bold font!

You can watch this event LIVE on FloTrack here ---> http://bit.ly/2iQzxnq

Chantz Sawyers shocked the crowd at the NCRunners Holiday Invitational when he ran a NC State Record and US#3 All-Time 500 of 1:02.36.  Sawyers will match up against the strongest 500m field he will see all season this Saturday at the VA Showcase and his PR is still over 2 seconds faster than the rest of the field.  Sawyers has his sights set on Strymar Livingston's (Christopher Columbus, New York) national record of 1:01.70 set at the New Balance Games in 2012.  You can find the US All-Time List for the 500.

Kokayi Cobb (Christ School), Braxton Ford (Parkland) and Ben Laspaluto (Panther Creek) also will be competing in the invitational sections of this event.  Cobb only has one 500 to his name and that was last indoor season where he ran a 1:07.40.  He's run 48.38 in the 400 and certainly has potential to go significantly faster than his current 500 PR.  Ford and Laspaluto currently sit at NC#8 and NC#9 with their 1:08.00 and 1:08.08 respectively.

The fast section will run on Friday night and it looks like Kyna Robinson (SE Raleigh) will narrowly miss it as she is the 6th overall seed with her 1:15.16 PR.  That mark currently leads North Carolina by over 2 seconds as she will look to make a statement that she isn't only the girl to be in North Carolina, but is a national elite in the event.  Teammate Saidah Hardwick (SE Raleigh) comes in as the 11th seed with her 1:18.21 PR and Mariah Atwater (Rocky River) as the 13th seed as they will likely go head to head in one of the earlier sections.

Christian Pigues (Rolesville) will make his track debut in a Rolesville jersey after transferring from Trinity Christian in the summer.  He holds an 800 PR of 1:53.20 and will go up against Brandon McGorty (Chantilly, Virginia) who will certainly take out the pace hard.  McGorty recently ran a US#2 1:04.33 500 proving that this will be a very fast race.  McGorty also holds a 800 PR of 1:48.58.  Pigues will be doubling back from the Mile on Friday night.

Kyle Fawzi (Panther Creek) is ready to show off his wheels against a strong 1000 field. Fawzi holds a PR of 2:36.82 from this season and enters the race as the 9th seed.  This race will likely be won in under 2:30 as the top two seeds, Miles Owens (Grafton HS, Virginia)  and Weleed Suliman (Douglas Freeman, Virginia).

Nathan Gamble (Leesville Road) and Gable Dershem (Cleveland) will bounce back from the Mile on Friday night and race in a 2 Mile on Saturday. Gamble enters as the 5th fastest seed with his 9:28 and Dershem the 11th with a 9:39.  Caleb Petty (Leesville Road) will be looking for a big PR in this event after having a very strong cross country season.

Reagan teammates Isabel Zimmermann and Ainsley Cooper will take on a strong 2 Mile field on Saturday.  Zimmermann showed she's in as good of shape as ever with a strong 1600/1000 double at JDL last week where she ran a state lead in both events of 5:07 and 3:01.  She is seeded #3 in this field and will look to challenge top seeds Julia Lambert (Norfolk Academy, Virginia) and Rachel Northcutt (Cosby, Virginia) for a VA Showcase title.

Panther Creek and Asheville will compete in a 6 team invitational section on Saturday.  Looking at Panther Creeks lineup with a strong short sprinter in J Johnson, a slue of strong 500 runners and a good 800 meter runner in Kyle Fawzi this looks to be a prime event for them.  They have 8 athletes entered on the relay team so we aren't completely sure who is going to compete on the team.

Rocky River has been strong in both the 4x800 and 4x400 this season despite the transfer of Jazzmone Boyd to Mallard Creek.  They'll test themselves against a strong Invitational section where they come in as the top seed.  Aureilya Harris has run 3:04.65 in the 1000 this season and will likely be their strong anchor leg that will hope to pull them to victory.

Jayhlen Washington (North Brunswick) and J Johnson (Panther Creek) sit NC#1 and NC#2 so far this season and are separated by 4.5 inches and are the only two boys over 22 feet.  They'll compete against a very strong long jump field that will likely take a jump in the upper 23s or ever over 24 feet to win.  Washington has the best PR in the field with his jump of 24-6.5 last outdoor season.

Last season Courtney Murph and Candice Whitley (SE Raleigh) were a huge part of Southeast Raleigh's dominance at the NCHSAA Indoor and Outdoor state championships last year.  They come into the meet with marks of 37'11 and 37-10 respectively and will look to inch closer and closer to the 40 foot mark throughout the indoor and outdoor season.