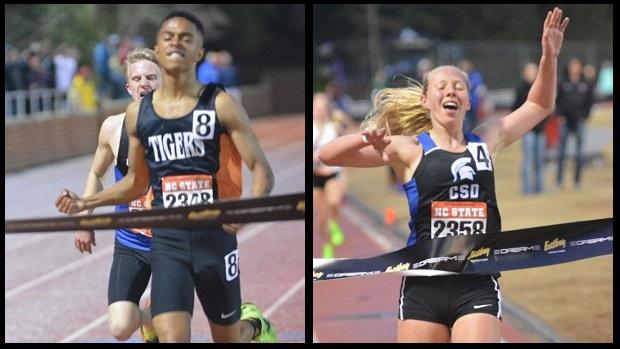 They will be joined in New York by Sydnei Murphy and Cravont Charleston, who earned spots in the Dream 100 on Friday night. Plus, the Premier 3200's produced big times as always!

The more things change, the more they stay the same - at least so it seems sometimes. Last November at Reagan, Ryen Frazier and Tanis Baldwin won the Dash for Doobie 3200's, the biggest and fastest races of their distance on North Carolina's fall calendar. On Friday night, the biggest and fastest 3200's of North Carolina's spring season were held at NC State's Paul Derr Track during the Raleigh Relays, and it was the same two runners taking the wins. They took very different paths on the way to crossing the finish line first, though, as you can see from the recaps below.

Some things really do change, however. The meet had an extra twist - or rather, four extra twists: boys and girls qualifying races for the Dream 100 and Dream Mile at the adidas Grand Prix in New York in June. Although that divided up the distance-running talent between the mile and 3200 races, it also gave the meet a sense of increased stakes, as runners ran not just for prestige, but also for a tangible reward. The best part? North Carolina athletes took all 6 races, guaranteeing that the Old North State will be represented in a big way on the national stage later this year. Check out the highlights of each race below! 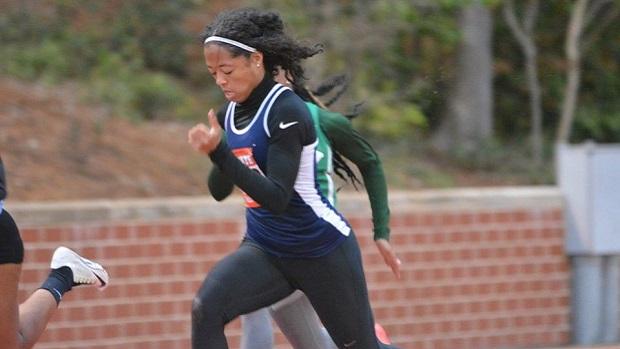 Gabriele Cunningham (Mallard Creek) is ridiculous out of the blocks - she showed this at the 4A Indoor State meet, as she rocketed in front of Ebony Williams at the first hurdle, and she showed it again last night. Despite the cold temperatures (45 degrees and dropping, which is FAR from ideal for a sprinter), Cunningham exploded on the gun and led the race early. Near the midpoint, though, Sydnei Murphy (Apex) was able to find her top gear, and she pulled away for the win. Murphy's time of 12.09 is NC #2 right now, and is pretty amazing considering the conditions. She will head to New York to run in the Dream 100, where the competition should give her a final chance to challenge the family PR - her older sister Alexis ran a wind-aided 11.66.

The boys field, unfortunately, was drastically reduced due to scratches, and only three guys ended up competing. The incoming favorite, Cravont Charleston (Mallard Creek) asserted himself early and went on to what looked like a conservative win, running 10.89. Perhaps he didn't want to risk injury by going to his final gear? In the end, it doesn't really matter - he got the ticket to New York, and he will have plenty of warm days the rest of this season to run fast times. 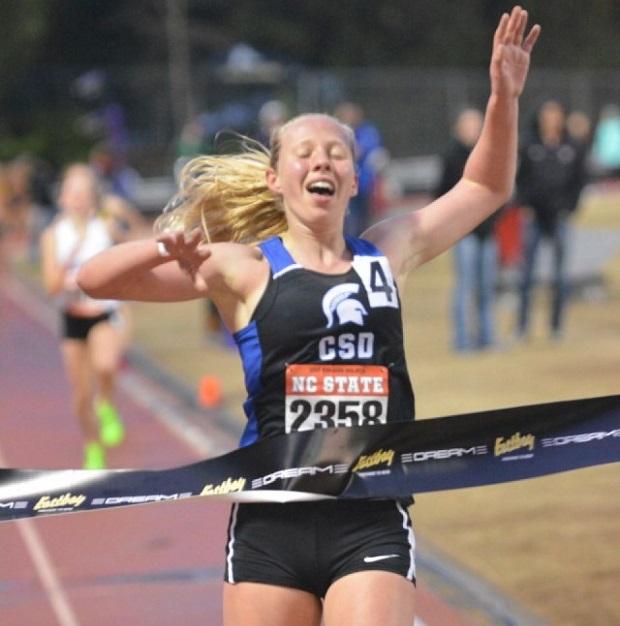 Although Malia Ellington (Community School of Davidson) went right to the front, the pace was quite conservative for a group of girls with sub-5 aspirations - the field was well above 1:15 for the first 400 and they crossed the 800 at 2:35 - 2:36. Ellington was content to lead at that pace, with Eliza Dekker (Durham Academy) on her inside and the rest of the pack close behind, as she has always been confident in her closing speed. She never gave up the lead, either, taking sole possession late in the second lap and then fighting off a challenge from Jennifer Fleming (Blacksburg VA) early in the third. With about 600 to go, Ellington decided to go, and she steadily and smoothly powered away from the rest of the field, covering the final 800 in 2:18 to win the race in 4:53.75 NC #2 US #8. Libby Davidson (E.C. Glass VA) won a Virginia battle with Fleming down the final stretch, but it will be Ellington who has a guaranteed spot in the Dream Mile, where she will join Ryen Frazier in representing North Carolina. 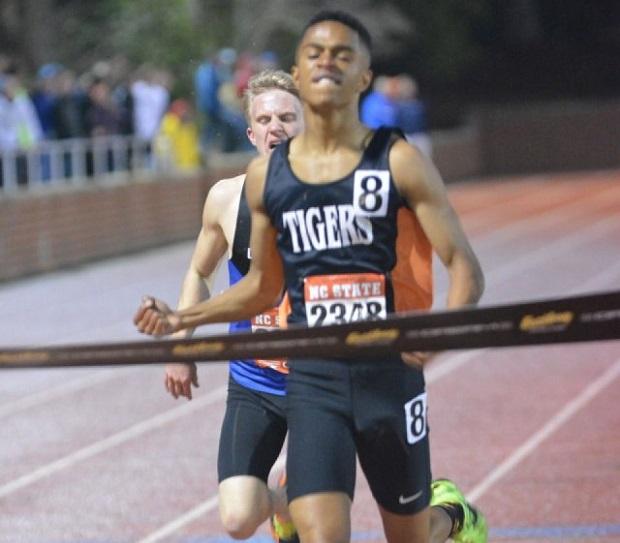 Like the girls' race, the boys began conservatively, remaining packed for quite some time. Philip Hall (South View) took the early lead, loping along with a long, relaxed, and fluid stride. Surprisingly, incoming favorite Matthew Novak (Deep Run VA) did not assert himself early in the race; instead, it was Tyler Cox-Philyaw (Millbrook VA) on Hall's shoulder as the field came through the 400 at a very moderate 1:06 - 1:07. Coming into the second homestretch, Mitchell Resor (Weddington), who had been right behind Hall, decided to swing VERY wide and move up to force the pace, disturbing the back end of the lead pack in the process. Resor hit the 800 at 2:15, with Novak and Adam Barnard (Daniel Boone TN) responding to the move along with Hall. There were still 8 guys in striking distance as the runners came to the bell, as Novak and Boone moved around Resor. Novak tried to beat Boone to the inside spot but didn't quite get there, having to break stride momentarily, and that put Hall into second after a much faster 62-second third 400. Still looking relaxed, the Fayetteville phenom passed Boone to take the lead for good on the back stretch, then held off a final challenge from Novak to break the tape in 4:15.10 NC #1 US #9. Hall's finish seemed measured, as he glanced at Novak twice down the final stretch, and appeared to do just enough to take the win whiole still having another gear if needed. 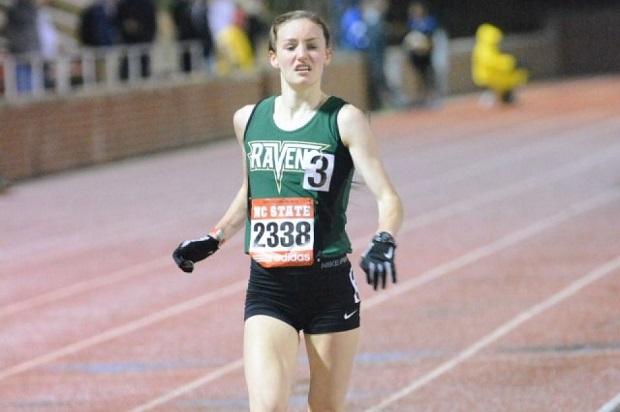 There wasn't much mystery as to how this race would develop, at least up front. Ryen Frazier (Ravenscroft) just earned the indoor national title at this distance, and she didn't need to race for an invitation to the Dream Mile - she already has her spot in hand. She charged straight to the front, hitting her pace early and daring the rest of the field to go with her. Weini Kelati (Leesburg Heritage VA) did just that, and Elly Henes (Green Hope) also stayed in range for a while, but the rest of the field did not take up the challenge, instead forming a huge pack and seeming content to race each other. After just 400 meters, which Frazier ran as fast as the milers, she and Kelati had opened a 20-meter lead on that main pack, with Henes bridging the gap about 5 meters behind the leaders. Kelati hung with Frazier until the end of the third lap, with the Ravenscroft runner cranking out repeated 1:15 - 1:16 laps.

By the midpoint of the race the top three were essentially gone, although Henes had begin to gradually stalk Kelati. Behind them, the main group began to split into two packs, with Lily Anderson (T.C. Roberson) at the front of the first. Anderson was chased by Kayla Holder (Wake Forest) and Sophie Ebihara (Cardinal Gibbons), as well as Virginians Lindsey Blanks (Tabb) and Bonnie Angermeier (Blacksburg). Frazier motored to a US-leading time of 10:05.44, as Henes eventually caught and passed Kelati to record a new PR of 10:3297 US #3 (Kelati finished at 10:36.30 for US #6). Angermeier emerged from the chase pack to finish 4th, pulling away from Blanks, Ebihara, and Holder as 11 girls broke the 11-minute barrier. 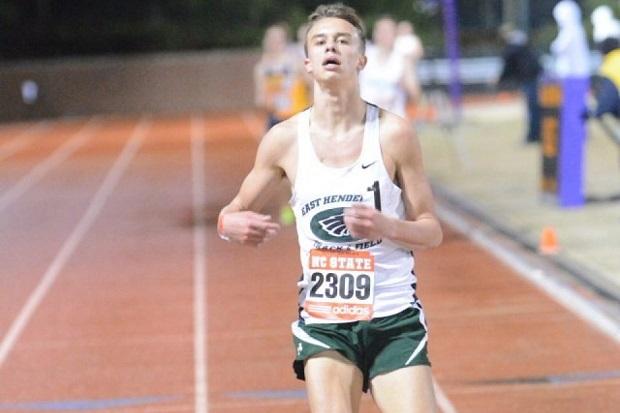 This race did not feature a dominating runner, but instead we came in expecting a very balanced and competitive field. That's exactly what we got, with a large pack at the front through most of the race and several lead changes. Tanis Baldwin (East Henderson) took the early lead until Andrew Ciaccia (R.J. Reynolds) came over from the outside alley on the back stretch, and Ciaccia stayed in front through X. Zach Boone (Mitchell) trailed Baldwin, with Jeremy Brown (Broughton) right on his heels, making it an all-NC affair up front in the early-going. Zach Boone (Mitchell) took the lead at the 600 meter mark and appeared to look back to encourage Baldwin to go with him - the two have battled more times than they can count, and have a lot of respect for each other. Baldwin did go along, as did Brown, while Kyle Christ (West Johnston) moved up on the outside to claim 4th. Kenny Kneisel (Mount Tabor) joined the group at the 1200 mark, but the entire field was still within a three-second range. Boone faded a bit on the fourth lap, though, and Baldwin took the lead with Kneisel on his hip, crossing the line at 4:40.

The third 800 saw a four-man lead group develop with Baldwin, Kneisel, Brown, and Christ staying closely packed, while Peter Seufer (E.C. Glass) tried to stay connected. Brown made a big move at the end of the 5th lap, setting an aggressive pace as Kneisel covered him. Christ also stayed close, but it looked like Baldwin was beginning to fade. That was deceptive though - he only got back as far as 4th place before rallying just as the wind was starting to fade from Brown's sails, and with 2 laps to go he was still in the thick of things. Behind the front 4, Seufer and Sam Teller (Blacksburg) were struggling to stay connected, while the rest of the field had fallen quite a ways behind. Seufer did manage to get to the back of the lead group as they approached the bell, and that's when Baldwin took command. He pulled away steadily to win in 9:02.66 NC #1 US #5, clocking :59 over the final 400 and 2:06 for his last 800. Christ pulled through for second in a big PR of 9:07.58 US #11, while Kneisel finished third. Seufer was able to get past Brown, as did Teller.