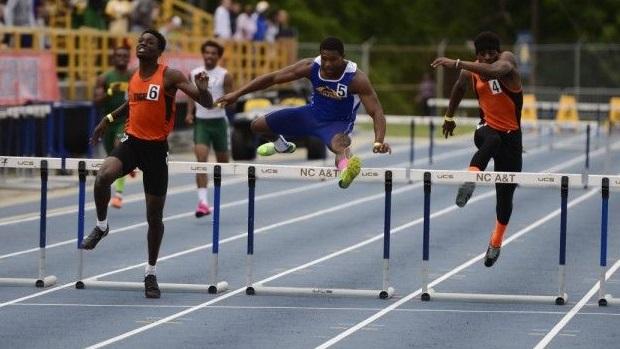 If Nyheim Hines has improved as much in the 300 Hurdles as he did in the 55 Dash, then we're in for a treat in Fayetteville this weekend.

Let's just get one fact out in the open: given the weather problems we've been having this outdoor season so far, nobody really knows what kind of shape anybody is in. Even the luckiest athletes have only had 2 or 3 meets, and some teams haven't even put their big guns out there yet. But, we FINALLY have a good weekend of weather, and we're about to find out a lot more about what every team has.

The Tiger Relays will be a big part of that learning process, as they bring together some of the top Sandhills talent, a good chunk of the Wilmington teams, and just a dash of the Raleigh-area schools. The result is a good mixture of talent from all disciplines, and a very competitive early-season meet.

Can Southeast Raleigh's girls take the top three spots in the shot put? Yes. Yes they can. Hasana Clark leads a talented group that has 2 girls over 40 feet already, and may get a third there before too long. The girls' discus will be more challenging for the Bulldogs, owing to the presence of South View's Chinyere Bell and Jack Britt's Alexis Thomas, but Southeast Raleigh actually adds a 4th thrower there in the person of Tameia Morrison. Ryan Davis (Pine Forest) and Terrell Adams (Middle Creek) will square off in the boys' shot put and discus, with Davis the favorite but Adams close enough to make it very interesting. Davis had a PR of 57' 6" indoors, while Adams threw 54' 7"; they have thrown 153' and 146', respectively, so far in the discus this season (though Davis has a PR of 175').

The boys' long jump should be pretty wide open, with Joshua McGowen (Overhills, 22' 7" last year), Romel Ponder (71st, 22' 11.25" indoors), and Isaac Wilkerson (Westover, 21' 10" last year) all in contention. On the other hand, Darryl Shaw (Jack Britt) should dominate the triple jump; he posted a 47' 8.5" last weekend at New Balance Nationals. Denali Hamilton (South View) is underseeded in the long jump (which is refreshing at this point of the season) - she jumped 17' 7.5" this past indoor season, and that makes her the favorite. Jade Jordan (Pine Forest) jumped 17' 7" last spring, so that should keep things interesting. Autumn James (New Hanover) hasn't recorded a triple jump mark since last May, but she has been over 35 feet; on the other hand, freshman Jordan Gary (Southeast Raleigh) jumped 34' 11" just a few months ago, so take your pick between them. In fact, the Bulldogs have a fleet of 34-footers, and any one of them could win this.

Rachel Breasseale (Union Pines) was one of the state's breakthrough athletes last spring, clearing 5' 6" in the high jump after going no higher than 5' 2" her previous season. She posted a 5' 4" indoors, and when she jumps well there are few in this area that can beat her. Freshman Taylor Sutton (Garner) could be one of them, after also getting over 5' 4" this past winter. The boys' high jump is also anyone's guess, with Dandrell Utley (New Hanover) and Mykol Branch are the only two who have cleared 6' 4", while Ponder hit 6' 2" indoors. Allen Frye (South Brunswick) should dominate the boys' pole vault.

Joshua McGowen hasn't run the hurdles since he finished 4th in the 2014 4A outdoor state meet, so who knows what the Overhills junior has? If he isn't up to full speed yet, then this event is anyone's to win. On the other hand, the very safe money is on Nyheim Hines (Garner) in the 300 Hurdles one of the three events in which he is the state's top returner overall. The first 300H of the season can be rough, but Hines has the strength and experience to win it, even with another sub-40 guy in New Hanover's Jackson Denton in the race.

Amy Lee (New Hanover) ran 15.96 last spring, but opened this season with a 16.95 - I'm guessing this weekend's result will be somewhere between the two. That makes her the favorite, but Jack Britt's Dinah Marie Dumpson is right there with her current hand-timed 16.74. Dumpson and Lee should also contend in the 300 Hurdles, where yet another Hines - sister Nyah - will try to take the gold medal back to Garner. Both Hines siblings would be the top seed in their respective high hurdle races, but both opted to put all their energy into the 300, and it will be very interesting to see how that turns out.

The overriding story of the boys' distance races is "rust" - very few of the top-seeded runners have raced much recently, and for some it has been a truly long time since they really stretched their stride in a race. Graham Parker (Hoggard) will make his return to the track official after a long layoff (he sat out nearly all of cross country season, and has never run indoor track). He is entered at his PR or 4:19, but will almost certainly have a lot of rust to shake off (although a 10:02 3200 last week helps). Josh Mitchell (Cary Academy) has run 4:34 this spring, and Michael Staples (South View) clocked 4:32 indoors - so it does seem reasonable that the pace could be under 4:30. Parker's teammate Robinson Snider has the top seed in the 3200, entered at the time he ran while in peak form at the end of cross country season; otherwise, he hasn't ever broken 10 minutes. Jack Cawley (Middle Creek) has broken 10 minutes, both last spring and also this past indoor season.

Don't let the seeds fool you in the girls' 1600 - whenever you get a mix of current times, indoor times, and times from last spring, you're going to get some deceptive arrangements. The point is, Taylor Delaney (South View) is not 13 seconds slower than Kate Sanborn (Jack Britt). In fact, Delaney ran faster 1000 times this past winter, although the two were close - and you can expect them to be close again this weekend. Likewise for Janay Hall (South View), who ran fast 1000's this winter and also ran 5:25 in the 1600 indoors. The wild card in the race is Sarah Bodmer (Cary Academy), the NCISAA 3A state champion in cross country; she has only run 4 1600/mile races in her career, and her last race was an 11:40 3200 before Christmas. Bodmer has a very good chance to win the 3200, where she will face Sara Pellizzari (Hoggard), who has only a single track race under her belt since last May.

Overhills has a great boys' 4x4, but for some reason they are entered at 4:16. If that is a mistake, expect them to be the team to beat in the meet's final race. They might win the 4x1 and 4x2 as well, as they have hand times from both races to justify their seeds, including the current NC #1 in the latter race. Pine Forest and Jack Britt both have strong 4x2's as well, and you can be sure that at least one of the Fayetteville-area schools will put together a strong enough 4x1 to push the top seed. Southeast Raleigh travels south with the depth and talent to run a top-flight 4x4 and 4x8, and in fact they intend to leave with gold and silver in the longest relay. Pine Forest's boys are entered with a top-3 seed in 7 different relays; either that team is really deep with a broad base of talent, or they're going to have a hard time living up to those entry marks. South View is always deep, and the Tigers are focusing on a narrower range of relays, including the SMR and DMR (where you can also expect Pinecrest to field a strong team).

Using current times only, Nash Central is the top seed in the 4x100; of course, who knows what most of these teams can really do right now? Southeast Raleigh has the fastest 4x200 time in the field, and always has the depth to run some quality relays; the Bulldogs ran 1:45 indoors in that event, as well as a 4:01 in the 4x400 that makes them the favorite there, too. Nash Central should provide strong competition in both of the long-sprint relays. Laney ran 10:43 in the 4x800 last week, the best outdoor time of any school entered in the event, although Southeast Raleigh ran 10:02 indoors. To run a strong 800 SMR you need a strong 400 anchor, and that brings Southeast Raleigh and Jack Britt into the equation (although South Brunswick, Pine Forest, and Pinecrest could also contend). Finally, expect South View to run away with the girls' DMR if they load up both Delaney and Hall to run it; if not, then your guess is as good as mine!