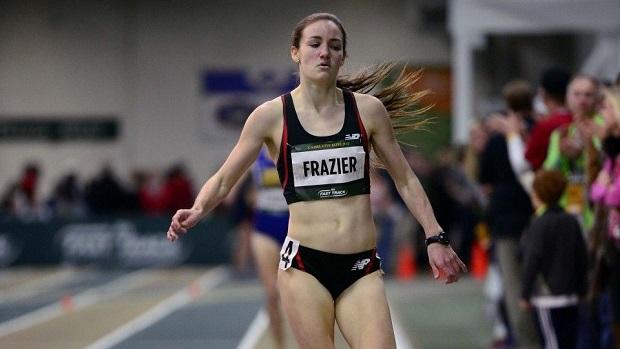 Ryen Frazier now ventures to the scene of one key aspect of her older sister's legendary senior year, as the younger sister continues to add to her own legacy.

New Balance Nationals Indoor (or NBNI) begins today at the Armory in New York City, and as always there will be a strong contingent of North Carolina athletes in attendance. The sections below will go through our state's entries in the Championship events on each day. For a complete list of entries that includes Freshman and Emerging Elite events, head to our live coverage page.

Heading to New York to run the 5K has become a thing recently for North Carolina's best female distance runners, starting with 7 girls that competed in the race last year. For 2016 the number is five, but they are 5 of the state's best. Ryen Frazier (Ravenscroft) has only raced once since the New Balance Grand Prix the first week in February, and you can bet that the extra training will pay off here. This is the meet and event where her sister Wesley set a national record in 2013 with a huge kick, cutting it so close that even the announcers thought she had lost to Erin Finn. Can Ryen generate her own signature performance with a win over Anna Rohrer?

Joining Frazier in the fast section is Caroline Yarbrough (Page), who has ascended from 11th in the 4A cross country state meet to second in the state overall in the indoor 3200. This will be Yarbrough's first 5K on the track. Lily Anderson (TC Roberson) will try to improve on her NC #7 All-Time ranking in this event, with Theresa Enright (Green Hope) and Rebekah Greengrass (Panther Creek) alongside her in the first section.

Enright will have teammates to cheer for later in the day, as Green Hope (running under the Western Cary club name) will compete in the Distance Medley Relay. Katie Tomasi and Elly Henes will hold down the critical 1200 and 1600 legs as the Falcons compete against a field that includes national leader Suffern (NY). On the infield, NC's lone Day 1 representative will be Elizabeth Olesen (Hickory Ridge) in the high jump.

That makes it a girls-only day for North Carolina in New York, but that's OK - the rest of the weekend brings plenty of action from athletes of both genders.

Based on the season we just had indoors, you might guess that North Carolina will have several vaulters in the Armory this weekend, and you would be correct. On the boys' side, Marshall Shank (East Rowan) and Joseph Popek (Ragsdale) will jump in the unseeded section at noon, while Tristian Shaver (Ledford) and Drew Pedersen (Apex) compete in the seeded section later in the afternoon. They won't be the only Tar Heel State boys going vertical, either, as Christopher Garrick (Marvin Ridge) and Keon Howe (Mallard Creek) will be high jumping. Marcus Abaraham (Victory Christian) will put the shot, as will Khayla Dawson (Olympic), Alycia Springs (Mallard Creek), and Hasana Clark (Southeast Raleigh). Finally, North Carolina has one boy (Hillside's Marcus Krah) and two girls in the long jump, with the latter being Olivia Walker (Hopewell) and Sydnei Murphy (Apex).

On the Armory's famously lightning-fast banked track, the races start at 8:30 and go straight through until after 7 PM, and the sprinters are the featured individuals for the day. Murphy leads the state's female contingent in the 60 Dash, which also includes Katlin Sherman (Parkland), Gabriele Cunningham (Mallard Creek), and Lauren White. The trials are Saturday morning, as they are for the 60 Hurdles as well - and that is the one event where North Carolina is the most loaded on the girls' side. Ebony Williams (Parkland), Anna Cockrell (Providence Day), and Cunningham will all square off, along with Ariel Davis (Platinum Sports), Kylie McMillan (Southern Guilford), and Breanne Bygrave (Wakefield). Williams and Sherman will also tackle the 200 Dash, which follows the same trials-and-finals format. They will be in separate heats, so the pair of Mustangs will have to advance to the final to add a third chapter to the two titanic 300 battles they have already waged. Two more teammates, McKinley McNeill and the recuperated Erin Morrison, will be competing in the 400, as will Layla White (Cary) and Tia Robinson (Wakefield).

Did I say there were a lot of girls from our state in the sprints? How about the 6 boys competing in the 60 Dash! Rodney Rowe (Clayton) and Daniel Estrada (Platinum Sports) lead the group that also includes Trekel Lockett (New Bern), Jawan Miller (ZB Vance), Michael Davenport (Platinum Sports), and Chuka Soronnadi (Butler). Those last two are also in the 200, as are Dylan Peebles (Wakefield) and Jayon Woodard (Southeast Raleigh) - and Woodard will try to turn around for the 400 later in the day. Marcus Krah (Hillside) will try to follow in the footsteps of Isaiah Moore, who won the 60 Hurdles at this meet last year. Emmanuel Jackson (Sanderson) and Brian Kendrick (Hopewell) will also run the hurdles.

In addition to all the individual sprint races, the relays come to the forefront in the middle of Day 2 with both the longest and shortest being contested. That would be the 4x1 Mile and the Shuttle Hurdles, and North Carolina has representation in both. Cardinal Gibbons' girls and boys will take on the former race, as will the Chapel Hill and Green Hope girls, while Wakefield's girls will tackle the latter. Wakefield also has a girls' team in the 4x200 trials, along with Cary and defending silver-medalist Parkland. Green Hope's boys, meanwhile, will take a swing at the 1600 Sprint Medley. The evening will close with Cary and Leesville Road in the girls' 4x800, followed by Lake Norman and South View in the boys' race.