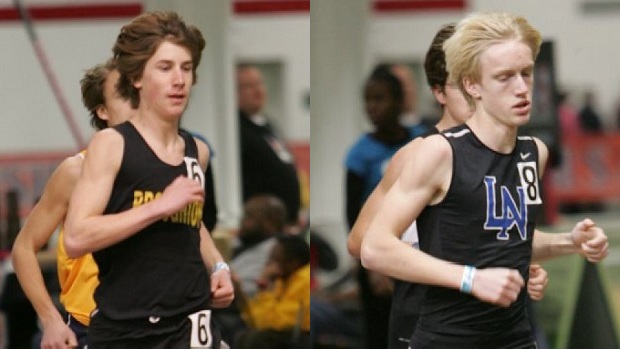 Some of NC's top distance runners, including William Roberson and Patrick Sheehan, will kick off their indoor season at UNC.

Indoor track returns to UNC on Saturday, as the Durham Striders Invitational kicks off in Eddie Smith Fieldhouse.  The former site of the NCHSAA Indoor State Championship, the facility has played host to many of North Carolina's all-time best performances.  This is also the start of the official push to the state meet, which is a mere 5 weeks away, and you will be able to notice a difference in the intensity and depth of the competition from here on out.  Take a look at some of the major storylines of this meet:

We have already had an excellent start to the season when it comes to the distance races, even though many of the state's major programs were taking time off from competition in December.  Several of those schools are revving back up starting with this meet, and that should give us a much clearer picture of how things stand in the longer events.  One of the biggest surprises is the presence of Chapel Hill, a program that has traditionally shunned indoor competition; they have a number of individuals in the meet as well as both boys and girls 4x800's.

Speaking of the 4x800, the girls' race should be pretty loaded: Cary takes on Broughton, Cardinal Gibbons, and Chapel Hill, with Virginia's EC Glass (running under the name "Hilltoppers") also in the mix.  Southeast Raleigh normally fields a strong relay, as well, and Leesville Road has the talent to compete in that race.  The girls 1600 looks strong, with Megan Sullivan (Broughton) and Mary Grace Doggett (Cardinal Gibbons) making their 2014 debuts against Maddie Ringenbach (Ravenscroft) and West Forsyth teammates Ashley Smith and Ellen Spencer.  Allie Castro (North Lincoln) will square off in the 3200 against Libby Davidson (EC Glass, VA), with Emily Pettis (Millbrook) and Callie Wynn (West Davidson) also competing.  In the 1000, Caitlin Potter (North Lincoln) has the best time this season, although when Kaylie Loyd (Southeast Raleigh) hits her stride she is always competitive.

In boys' competition, state leader Garrett Farrimond (West Forsyth) will try to retain his top ranking while several strong runners attempt to take it away from him.  Andrew Fea (North Lincoln) has had a good start to his indoor season, and could be the chief competition for the win.  Corey Aikens (Knightdale) is running his first 1000 of the season, but his 800 credentials are very strong.  Keep an eye on Josh Barrett (Cary) and Carson Ellerbe (Leesville Road), who are seeded a bit lower but have already had strong races indoors this year.  Also, lurking further down the performance list is John Dalton Rohr (Broughton), a very strong miler in the past who hasn't run the shorter races as often.  Fea and Ellerbe are also entered in the 1600 earlier in the day (which might sap their legs a bit, or might help them shake off the recent break and sharpen up).  They will face Patrick Sheehan (Lake Norman) in his first race of the season, as well as three Broughton runners: William Roberson, Jeremy Brown, and Asher Smith Rose.  Corbin Boyles (Maiden) is boldly seeded at 14 seconds below his PR, but he is a very strong runner and will be competitive; it will also be interesting to see how Vincent Crisp (North Mecklenburg) fares in the mile after a solid 1000 earlier this year.  Mihret Coulter (Apex) will try to take the 3200 against a strong group that includes Sheehan, Collin Loy (Southern Alamance), William Sandin (Broughton), and Ryan Shannon (North Lincoln).  All of that will be preceded by a 4x800 race that features Broughton, Knightdale, North Mecklenburg, Southeast Raleigh, Cary, Pine Forest, and Apex; all of those teams should be competitive.

Even in the sprint races, there are a few athletes making their indoor season debut; however, most of the state's best have already competed, and now they are looking to demonstrate improvement.  In the girls' 55, perennial contender Sydnei Murphy (Apex) has the best time this season, but Zakiya Bateman (EC Glass, VA) has a PR of 7.11.  Charminique Hackney (Cary) won the invitational 60 at the NCRunners Elite meet two weeks ago, a race that Murphy and Imari McLean (Hillside) chose to sit out, so the 55 finals on Saturday should help to sort out where they all stand relative to each other.  Teri Strickland (West Johnston) was in that 60, and she was competitive, so you can expect her to be right in the mix this week, too.  Layla White (Cary) will try to double in the 500 and the 300, and she has an excellent chance of winning both.  In the 500 her greatest competition comes from her own teammates, Lakeisha Warner and Julia Brown).  As for the 300, it looks like Strickland and Ngozzi Wedderburn (Athens Drive) will be the chief opposition.  In the hurdles, Shellbi Chapman (Sanderson) is making her season debut, facing state leader (and current US #5) Jacklyn Howell (Southeast Raleigh) as well as freshman phenom Kayla Moore (Cummings).  All of the action wraps up with a solid 4x400 that features Cary, EC Glass (VA), and Southeast Raleigh, among other contenders.

On the boys' side, the 55 Dash looks like a mostly Eastern NC affair until you look farther down the list.  Jahmaal Daniel (Terry Sanford) currently ranks 2nd in the country with his 6.36, and he is likely to emerge from this race as both the winner and state leader.  Quashawn Cunningham (Mallard Creek) and Khairee Lewis (Sanderson) have already provent their speed with strong indoor races; Tyshawn Siders (Jacksonville), Clarence Richardson (Douglas Byrd), and Lamel Batts (New Bern) have big outdoor hand times that they are seeking to justify.  Jamaree Murray (Southeast Raleigh), currently the US leader in the 500 from his race in Virginia last weekend, will step down to try to break 35 in the 300 (where he is also the state leader).  He will face an absolute host of top-flight sprinters, with Daniel, Lewis, and Cunningham in the race.  Knightdale's Marquavious Johnson is running his first 300, but he showed his fitness by running 49.17 for the 400 two weeks ago; his teammate, Kimani Hoffman, is also very strong in the 300 (as well as the 200).  Kyheem Cheatham (North Brunswick) is highly seeded, which actually bumped Daniel out of the fast heat, leaving Cheatham with a lot to prove in this race.  Without Murray in the 500, Saadiq Sweezer (Eastern Alamance) has the chance to continue and impressive winter season with a win.  T.J. Bleichner (Fuquay Varina) and Knightdale teammates Henry Kiedy and Marcell Johnson should also be in contention, while Quincy Rasin (New Bern) gets the chance to show that he can match his outdoor time while running twice as many curves on the much tighter 200 track.  Isaiah Moore (Cummings) headlines the 55 hurdles, which is only natural when you're ranked second in the the country.  There are four proven hurdlers in the field that may be jockeying for second place: Emmanuel Jackson (Sanderson), Xavier Brown (South View), Marcus Krah (Hillside), and Xavier Carter (West Johnston).  Damian Silver (Nash Central) has a big polar bear time, but he needs to prove himself under the glare of FAT, and making the finals here would be a big step in that direction.  If all of their guys can keep fresh legs throughout a long day, we will get to see US #2 Knightdale and US #3 Southeast Raleigh face off yet again in the 4x400, with North Mecklenburg hoping to make a splash by getting in the middle of that race.

If you only pay attention to the oval events at any North Carolina track meet, you're cheating yourself of the chance to see some of the nation's best athletes compete on the infield.  For example, in the boys' pole vault you will get to see Apex's stable of vaulters (Michael Utecht, Joe Devries, and state leader Drew Pederson) take on Harry Glasser (Bolles, FL), who has a PR of 15 feet.  Isaiah Moore (Cummings) will face Kimani Hoffman (Knightdale) in the long jump, with 22-footers Re'Quan Harley (EC Glass, VA), Marcus Krah (Hillside), and Xavier Brown (South View) also in the mix.  Hoffman will once again face the Asheville duo of Mekhi McGuyver and Noah Tyson in the triple jump, as Michael Jenkins (Garner) and Kyheem Cheatham (North Brunswick) look to get their name higher in the rankings.  Matthew Zajac (EC Glass, VA) is US #8 in the shot put coming into the meet, and that should inspire Mateius Brown (Western Harnett) and Ryan Davis (Pine Forest).  Look out for Myquan Stout (Jesse Carson), the 2012 3A outdoor champion in the shot put - he has shown flashed of enormous potential, throwing 58 outdoors last year, but has been inconsistent.  Moore should have his way with the high jump field, as he is the only athlete to have cleared 6' 4" let alone his PR of 6' 6".

The girls' shot put features state leader Alycia Springs (Mallard Creek), who looks like a title contender both indoors and out.  Alexis Dickerson (Western Alamance) has been over 40 feet in the past, while Hassana Clark (Southeast Raleigh) keeps edging closer to that mark.  Kayla Moore (Cummings) has a chance at a double in the long and triple jump, but she will have to get past Sydnei Murphy (Apex) in the former event; both of them have been further than 18 feet this season.  Imari McLean (Hillside) has cleared 18 feet in past seasons, while Carlecia Spivey (Douglas Byrd) and Jeryne Fish (National Cathedral, DC) have been in the upper 17's.  Moore is the top seed and likely winner in the triple jump, although Nicole Lawson (North Mecklenburg) and K'Lynn Beal (Broughton) are within striking range.  Anna Eaton (Apex) has cleared 12 feet outdoors this winter, and will be making her indoor debut for the season; she may have her hands full with Katelyn Utley (Tift County, GA), who has a 12' 6" PR, and freshman Carson Dingler (Gilmer County, GA), who has been 12' 1".  The girls' high jump is anybody's to win, as the top seeds are four girls entered at 5' 0".