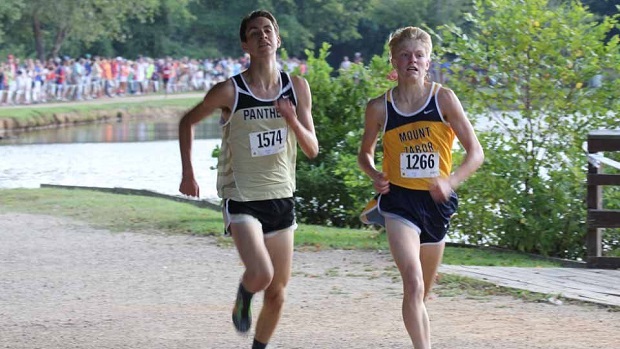 The infamous bottleneck at Jackson Park is just one of the features of the two big invitationals that highlight this weekend.

The first weekend of official competition for the fall season is upon us!  As always, the initial round of 5K races is highlighted by the two big season-opening invitationals in Charlotte and Hendersonville.  The two are very comparable, as long as the course at Jackson Park isn't too wet, and we often get very good combined 5K results from this first set of big meets.  Not to be outdone, the eastern half of the state counters with two meets that are very young, although both appear to be gaining in stature.

This meet would fit quite nicely in the middle of the season: it has a large number of teams and produces a high level of competition.  Of course, McAlpine always produces fast times, even this early in the season.  We will get a nice glimpse at both the individual talent and the team development, with a nice sampling of programs from around the state scheduled to compete.  Of course, there will also be some things we want to see, that we won't get to see (for example, Marvin Ridge is holding out their top 7, and there are some key individuals who are sitting out for training or injury reasons).  Here are some of the things to watch for and questions to be answered:

For over a decade now, teams have been starting off their 5K season with a trip to the mountains.  You get cooler August temperatures, a beautiful and challenging course, and great competition - it's a perfect experience for the first big meet of the season.  Here are a few things to look for if you're going to be at Jackson Park on Saturday:

Started last year, this meet already seems to be gaining a following.  Combining the evening race with a relay format makes it a pretty unique experience.

This meet has been held for the last few years, and the course seems to produce quick times (I've never been out to measure it).  There are a few strong teams planning to attend, and so the results could be very interesting.