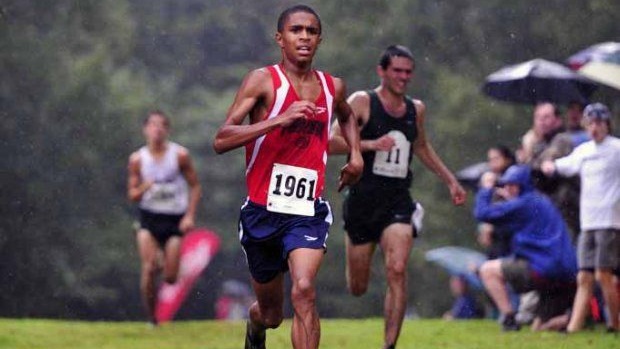 After a monster spring track season, Philip Hall has dedicated himself to leading his Terry Sanford team toward glory.

NCRunners is counting down the top 25 boys cross country teams in the state, from all classifications, in preparation for the start of the fall season.  The top 3 boys teams will be revealed on August 1st, which is the official first day of practice.  For a more detailed explanation of how these rankings were developed, see this article.

It's sometimes hard to get a fix on the strength of teams in the greater Fayetteville area, because there are some flat, fast (and occasionally short) courses that can boost their times beyond what they could achieve on other courses.  One thing is for certain, though: Philip Hall can run.  This past spring, he won 4A individual titles in the 800 and 1600, and he will be the #35 returner in the nation in the 1600.  With his team moving to 3A this fall, Hall should challenge Tanis Baldwin for the individual title.  The Bulldog team behind him is deep, and from 2-7 they are split by only 36 seconds.  Terry Sanford would rank among the top 5 returning 3A teams going into this season, although they will need to get some boys under 17 to contend for the 3A team championship.  This year's squad will also have to shake off a long history of teams from their area underperforming at the state meet (with one notable exception).

South View coach Jesse Autry told me almost two years ago. "Watch out for Pine Forest, that's a program on the rise!"  Though it took a little while for the Trojans to show it on the state level, he was right (as evidenced by their 7:50 in the 4x800 this spring).  If they can carry that momentum over to a strong summer, this team should make the state meet (although that won't be easy).  800 success doesn't always translate to cross country, however, and Pine Forest does need to cultivate depth and get their 4-7 runners to tighten up on the top three.  That makes this squad a real wild card for the upcoming season, with the possibility of sneaking into the top 10 at the 4A state meet just as likely as getting left out entirely.  It will be interesting to see how things turn out in the resurgent 4A East Region, which has now become quite competitive after some down years.

Although this school has been better known for individual success over the past several years, the team has done well at the NCISAA 3A level.  This is a veteran squad (three seniors and two juniors among the top 7), and if that leadership leads to a strong summer of training, the Chargers could be a contender this fall.  Josh Mitchell showed signs of developing into a star last fall, although his track season was a bit underwhelming.  If Mitchell emerges as a threat to run top 3 at his state meet this year, then things could come together for Cary Academy; if he doesn't get there until his senior year, though, it could be a year too late.

The last 3 years have been somewhat frustrating for the Knights: although they have been a very strong program, they have finished third, second, and second again in the the 1A state meet.  This year's squad would like nothing more than to break through and win a state title, but a move to 2A could get in the way.  LNCS returns a balanced team with a strong top 5 and solid depth.  As an added bonus, the Knights have a tandem of #1-caliber runners, which should alleviate the burden of having to lead the team and set the pace every single race.

It is almost the exact same story for the Pioneer boys as it was for the girls: the graduation of a very strong senior class, coupled with a shake-up in the coaching staff, could make this a bit of a rebuilding year.  There is young talent, however, as only two of the top 7 returners are seniors this fall, and Watauga has a potential individual star developing in Michael Holland.  This team ranks third in the 4A West coming into the season, and taking this many returners to the state meet would be an excellent step back toward the top 10 in 2014.