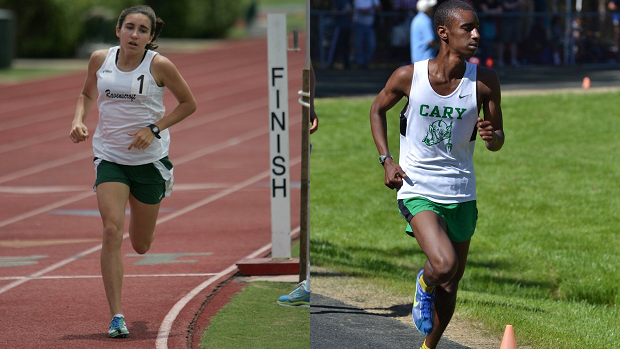 Distance races take center stage this weekend at one of the oldest and proudest meets in the state of North Carolina.

What a pair of back-to-back meet weekends in Raleigh!  First the Wake County Championships last weekend, and then you take most of those teams and add several more strong squads, and you have the Bojangles Apex Relays.  The meet has as deep a history as any outdoor invitational in the state, and it defies the usual pattern of events throughout the season.  Normally relay meets are placed early, with traditional schedules late, but this meet offers a full slate of 7 relays per gender with only 3 individual races (plus all field events).  The atmosphere is great, the meet management is top-notch, and the competition is always fierce.  What more can you ask for?

The 1600 is likely to be the highlight of the day, with Wesley Frazier (Ravenscroft) there to set a fast pace and many of North Carolina's best female distance runners ready to benefit from it.  Given the perfect temperatures for distance racing, this could be spectacular!  Malia Ellington (Community School of Davidson) and Eliza Dekker (Durham Academy) have broken 5 minutes before, and this would be a great setup for runners like Jennie Cunningham (Pinecrest), Megan Sullivan (Broughton), and Pegah Kamrani (East Chapel Hill) to get there for the first time.  The wild card here could be Grace Morken (Carrboro), who normally doesn't show top form until May rolls around.  The 100 Dash features West Johnston's Jasmine Dawson, racing Shakinah Brooks (SE Raleigh) and Sydnei Murphy (Apex).  Don't count out Imari McLean (Hillside), who ran some very fast 55 times this winter.  The 100 Hurdles will pit Mollie Williams (Clayton) against some of the best from Wake county, including Jacklyn Howell (SE Raleigh) and Jasmine Moore (Wakefield).  In the field events, look to the high jump for great competition, as there are 7 girls seeded at 5' 2" or higher.  The top four have all cleared 5' 4": Margaret Williams (Ravenscroft), Amara Bell (SE Raleigh), Libby Florence (Cedar Ridge), and Janea Williams (Pinecrest).  This would be a great setting for one (or more) of them to hit 5' 6".  The long jump also looks very strong, with 10 girls seeded at 17 feet or more, including 18-footers Brooks and Kacia Vines (Cedar Ridge).  The pole vault is always fun to watch, especially when three of the four twelve-footers are competing.  Last week, Kristen Lee (Wakefield) won, with Anna Eaton (Apex) edging out Rayna Yvars (Green Hope).

Although Wakefield is dominant in the 4x200 and an overwhelming favorite, this should still be an incredible race.  That's because there are 5 other teams in the fastest section that are seeded between 1:43 and 1:45.  The same is true of the 4x400, which features two separate races within the fastest section.  There are three legitimate sub-4-minute teams in Wakefield, Southeast Raleigh, and Cary, and then there are 5 more teams seeded between 4:06 and 4:11.  If anyone from the second group has the guts to try to run with the first group, it will either pay off in a huge time or lead to a collapse.  Like the 1600, the 4x800 is STACKED; however, will some of the key legs be tired?  Take the tremendous race between Broughton, Cary, and Southeast Raleigh from last weekend, and add Carrboro to the mix, and you have a formula for a barn-burner.  Finally, the Distance Medley looks very strong, as there are several teams that sport the talent to load up the critical first and fourth legs.  Ravenscroft will always be a threat to win with Frazier on the anchor leg, and Pinecrest also has a strong squad.  Chapel Hill and Cary should also be able to put good teams in the race.

The pole vault features the top three guys in the state: Ethan Smith (Cedar Ridge), Ian West (Fike), and Phillip Thomas (Cary), all over 15 feet this spring.  In the Discus Throw, Jon Beyle (East Chapel Hill) is the hevy favorite, but there is a knot of 150-footers behind him that will be dueling for second place.  Scott Peretin (Carrboro) and Demontay Rhem (East Wake) have been over 155' feet, and there are at least three other guys that can challenge them.  The 100 Dash has a few big names in Jahmaal Daniels (Terry Sanford) and Jakara King-Penn (Reagan).  Ravenscroft's Kofie Yeboah is also strong, and he wants an FAT result to back up his big hand time from earlier this season; ditto for Johnny Frazier (Princeton).  Therius Styles (Broughton) won the Wake County meet last weekend, and Cameron Cooper (Cedar Ridge) is no slouch, either.  As with the girls 1600, the boys' race is very strong.  Bakri Abushouk (Cary) has his eyes on the 4:10 mark, and rising stars Philip Hall (Terry Sanford) and Ian Milder (Mount Tabor) will try to tag along and drop their times.  With names like Chris Reeder, AJ Tucker, John Dalton Rohr, and Nik Kreiling lurking behind, this has the potential to be a tremendous race.

Last weekend produced a number of very good 4x200 times from different meets; this weekend, many of those teams come together in the same race.  Knightdale and E. E. Smith will lead 6 teams that have already run under 1:30, and that doesn't include Sanderson, who ran 1:28.88 last weekend but are in the second-fastest section this weekend.  Although it is a long event that only distance lovers can enjoy, the 4x1600 should be absolutely amazing.  Pinecrest is the top seed, and the Patriots have a deep squad, but they will have a very hard time with Broughton: the Caps sport four runners under 4:32.  North Lincoln can definitely stay with the front teams, as they have three legs that have run 4:33 or faster either this winter or this spring.  At the end of the day, nothing brings the meet to a fitting close better than a strong final section of the 4x400.  And a 4x400 that includes 4 of the top 5 teams in the state this season (Knightdale, SE Raleigh, NE Guilford, and NW Guilford), all 3:23 or faster?  That could send people home with a few memories.