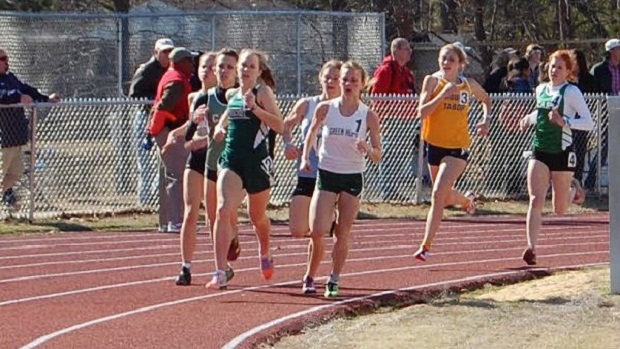 The track at Reid Ross Classical School hosts the Tiger Relays, one of three good-sized invitationals this weekend.

The weather is finally coming around, and outdoor track is about to truly begin this weekend with three strong invitationals.  Athletes from around the state will gather in Fayetteville, Greensboro, and the Charlotte area to shake off the rust and show off the hard work, and NCRunners will be on-site at all three meets!  Check out the brief previews below, follow @NCRunners on Twitter for live updates from all three meets, and come back later this weekend for photos, videos, and recaps.

Imani Abraham (Dudley) is one of the top discus throwers in the state, and also strong in the shot put, although she will have her hand full in that second event with Southeast Raleigh teammates Tiffany Dunham and Sharmani Hall.  If she is not competing at New Balance Nationals Indoor, Imari McLean (Hillside) will be a force to reckon with in the 100 and the long jump.  Daijia Ervin (Southeast Guilford) is also a contender in the 100.  The Premiere 1600 is shaping up to be a strong race as freshman Blair Ramsey (Grimsley) squares off against veteran Tristin Van Ord (Chapel Hill).  Ramsey ran 5:06.25 indoors, which would have been the top seed at the NCHSAA indoor state meet if her school had an indoor track team.

Sandy Chapman (Southeast Raleigh) and Gary Woosley (Northeast Guilford) will battle in the long and triple jump; Chapman held a slight advantage in both events during indoor competition, and he is also the top seed in the 110 Hurdles.  Winston Craig (Ragsdale) is the favorite in both throwing events as one of the top returners in the state.  Ariel Shores (Southeast Guilford) is coming off a breakthrough indoor season in which he ran 4:17 for 1600, which will provide quite a challenge in the first race of 2013 for Chris Reeder (Chapel Hill).  Thomas Popek (Ragsdale) cleared 14 feet in the pole vault during the winter season.  James Drummond (Lexington) is one of the true sprint stars in the state, and it will be interesting to see how his first 100 of the season turns out.

As with the girls, Southeast Raleigh and Chapel Hill can both put together goor 4x800 squads, although the Bulldogs are a bit more seasoned at this point of the year.  Those two schools are also likely to battle in the DMR (along with Northern Guilford).  Hillside has seeded their SMR and 4x400 teams strongly, suggesting that they have a strong group of athletes out for the spring, but they will have to get through Southeast Raleigh's depth in order to live up to those seeds.  The boys' sprint relays should be very interesting, with three schools (Southeast Raleigh, Northeast Guilford, and Southeast Guilford) that can put together good teams; depth may favor the 4A schools as the day wears on.

Brianna Heilsnis (Apex) is approaching the 40-foot mark in the shot put, and she will also be shooting for the 130-foot mark in the discus this spring (although that would be too much to ask in her first crack at the event).  Jenea Williams (Pinecrest) is one of the top returning girls in the high jump, having jumped 5' 4".  Megan Comstock (Cardinal Gibbons) and Anna Eaton (Apex) are both good vaulters, although Eaton had the stronger winter season.  Carmen Hilliard (South Brunswick) headlines the 1600, although it will certainly not be a walk-over with Emily Vance (Overhills) and Sophie Ebihara (Cardinal Gibbons) in the race; Hilliard is also the top seed in the 3200.

The girls' sprint relays are a complete toss-up, with no real pre-meet favorites.  However, the Pinecrest girls are the top seed in the 4x400, and rightly so.  The Patriots should also be very strong in the 4x800, although Overhills also has talent in that event.  Likewise for the DMR, as when you have Jennie Cunningham on the anchor you can be very hard to beat.

Mateius Brown (Western Harnett) is one of only 5 returning boys in the state (all classifications) to have thrown 150 feet in the discus, and he will also contend for the shot put win here.  Reyho Tshiama (Apex) is a triple jumper with 45-foot potential, which is something that has been in short supply the last few years in this state.  Jesse Freeman (Harnett Central) is a legitimate 6' 6" high jumper, but the weather may not yet be warm enough for him to jump his best outdoors.  Jose San Miguel (Cardinal Gibbons) wants to get back over the 14-foot mark in the pole vault, if the conditions are favorable.  Philip Hall (Terry Sanford) may have to push himself in the 1600, although the battle for second could be very intense.

The E. E. Smith coaches certainly think they have a load of talent, as they have entered the top two teams in both the 4x100 and 4x200 (as well as the top seed in the 4x400).  That would be an impressive feat to pull off, even against a field of sprint relays that appears to be a bit weak.  Keep an eye on the Terry Sanford sprint relays; they are seeded without times, but when you have Jahmaal Daniel on the anchor leg you have potential.  The boys' 4x800 looks like a good race, with Apex holding the top seed and cross-town rival Middle Creek in second.  The Overhills boys have seeded two distance medley teams at times that would have been nationally ranked last year, including one that would have been #1 in the country; don't be surprised if none of the teams in that race break 11 minutes.

Julice Crowder (Monroe) has the best PR among the 100 runners (by far), but she might not be fully in form yet.  Crowder is also a top triple jumper, although Morgan Goodson (Providence Day) has a slightly better PR.  Mictasha Mickle (Mallard Creek), formerly at Victory Christian, could also be a contender in that race.  Emma Brown (Providence Day) competed sparingly this winter, but still showed she was in shape: her 11:44 indoors should be good enough to win the 3200.  Brown is also the top seed in the 1600, but could get more of a push from Weddington's Mallary Price than the seeds would seem to indicate.  Justice Briscoe (Mallard Creek) ran 56 for th 400 last year, and she should run away with the 400 title here.  Charlotte area independent-school rivals Mia Wilson (Charlotte Country Day) and Sarah Whitmore (Charlotte Latin) will each look to score an early victory in the 300 Hurdles.  Elizabeth Olesen (Hickory Ridge) headlines the high jump, while Mariel Finger (North Gaston) is a 10-foot vaulter (nobody else in the meet has gone higher than 8' 6").

Weddington can assemble a very strong DMR team, even if they are seeded second; having Morgan Garrett and Mallary Price at bookends helps.  Weddington should also have a solid 4x800, where they could be pushed by Providence Day.  The addition of Mickle to Mallard Creek's already solid sprint squad makes their relays potentially formidable; look for them to win the 4x100 and 4x400.

Evan Georges (Charlotte Catholic) quietly had a strong winter season, running 9:52 for the 3200.  He will square off in that race with Collin Loy (Southern Alamance), who ran 9:43 in his only two-mile of the indoor season.  Bryon Fields (Providence Day) is the only runner in the 400 field that has been under 50 in the past.  The 1600 looks like it could be the best race of the day, with Loy, Grant Rodgers (Heritage), Ben Huffman (Providence Day), and Matt Burns (Weddington) all seeded close to each other; don't be surprised if Nick Linder (Providence Day) also gets in on the action.  Jordan Warren (Hickory Ridge), the state's best triple jumper, appears to be focusing on the high jump in this meet (although he is the top seed).  Demetrius Benton (Hickory Ridge) has thrown over 140 feet in the discus, giving him a big advantage in terms of PR's against this field.  Jordan Richardson (Richmond Senior) is looking to cross over the 50-foot mark in the shot put.  Elijah Edwards (Garinger) is the only long jumper in the field to have cleared 21 feet in the past.

The Weddington boys are somewhat conservatively seeded in the distance medley, but they have the talent to make it out of the weekend with the best girls & boys times in that event (being held at all 3 invitationals).  They will have their hands full in the 4x800 with Providence Day, even without Ben Huffman on the anchor leg.  Forest Hills has put together some really strong 4x100 teams in recent years, and could come away with the win here.  Richmond Senior and Garinger both have a lot of faith in their sprinters, based on the seed times of their relays, although neither team ran under 43 or 3:30 last spring.