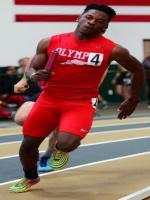 All-Classes Outdoor Top 50: Boys Sprints & Hurdles...
Ty Jaye Robbins (Piedmont) took possession of the state lead in the 200 Dash during a Marvin Ridge Invitational that produced four of the five NC #1's in this category....

All-Classes Returning Outdoor Rankings: Boys Sprints & ...
Nyheim Hines may have appeared suddenly late this winter season, but he's definitely not a flash in the pan - the Garner senior leads three events among returners from last spring....

4A Boys State Qualifiers As Of 1/26...
History tells us that the runner with the best FAT time coming into the state meet is the favorite in the 55, and right now that's Jawan Miller (Z.B. Vance)...

Boys All-Classes Indoor Rankings...
We haven't heard from Jayon Woodard (Southeast Raleigh) in a while, but he still leads the 300 and 500 despite taking some time off from racing....

Overall Winter Top 50: Boys Sprints & Hurdles...
Jayon Woodard leads the rankings in the 300 and 500, and he took on (and beat) college runners in the 400 this past weekend - the event he'll run at the David Oliver Classic....