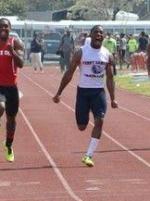 Senior Spotlight: Jahmaal Daniel...
The Terry Sanford senior is serious about training, and he has some very serious goals for his future....

NCHSAA 4A Regional Previews...
Brooke Gordon will try to lead TC Roberson to yet another championship as the postseason hits full steam....

Boys All-Classes Team Power Rankings...
If Jahmaal Daniel improves as much at the state meet as he did last year, he could move Terry Sanford into the #1 spot....

NCHSAA 4A Outdoor Track Preview...
North Mecklenburg&#39;s Sabrina Moore is one of many talented sprint contenders, and she is also a top long jumper....

All-Classes Indoor Rankings: Boys...
Phillip Bryant&#39;s tremendous 300 at the state meet catapulted him to the top of the state rankings....

Boys 4A Verified State Qualifiers...
Ragsdale&#39;s Thomas Popek, the top indoor returner in the 4A pole vault, faces a tough challenge in his run for a title....