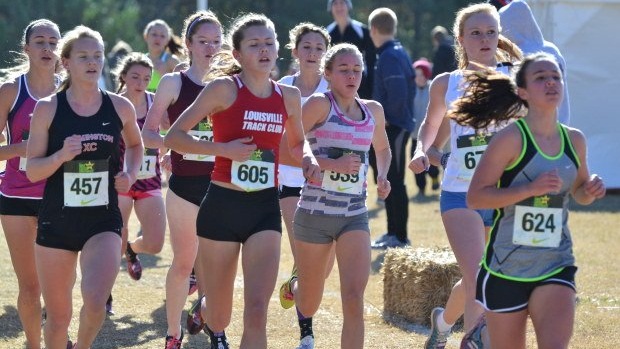 Wesley Frazier ran away, but behind her there were a series of intense individual and team battles that made for an exciting race.

Wesley Frazier (NC, running unattached) went straight to the front of the field and stayed there, pulling away with surprising ease.  She crossed the 800 in just over 2:30, and it seemed that only Jessica Molloy (Mountain Brook AL) was willing to break away from the main pack to chase her early on.  Frazier crossed the mile mark in roughly 5:10, and already had almost 10 seconds on Molloy.  Behind came the massive chase pack, but shortly after the 1600 spectators would see Hannah Christen (Lake Braddock) break away from that group to try to chase down the leaders.

At the 2K point, Frazier was 12 seconds out in front, but Christen has closed on Molloy to force a duel for second place.  Behind them came the field, with an astounding 18 runners crossing the mats within 1.5 seconds of each other.  Great American champion Assumption (KY) and perennial power Tatnall (DE) were out well and preparing to fight it out for the team title over the second half of the race, while North Carolina powers Green Hope and Cardinal Gibbons had put themselves in position  to upset some strong programs.

After cresting the hill, it was clear that nobody was up to challenging Frazier.  Christen was on Molloy's back, and the really interesting racing was in the jockeying for position among the leaders of the main group.  Bryn Harshbarger (Morgantown WV) had a step on the pack at the midpoint of the race, while familiar names like Carolyn Bethel (Hidden Valley VA), Kara Dickerson (Midlothian VA), Bailey Davis (Assumption), and Reagan Anderson (Tatnall) were in good spots. Frazier continued to look very comfortable as she maintained her lead going into the more technical woods section of the course, and she went on to cross the two-mile mark in 10:55.  Molloy and Christen continued to battle about 15 seconds behind the leader.  At around the 3K mark, the chase pack finally began to stretch out as Virginia rivals Dickerson and Bethel began to assert their claims to individual qualifying spots.  Davis, Anderson, and Harshbarger went with them, followed closely by Sydney Foreman (Ardrey Kell NC) and Mary Grace Doggett (Cardinal Gibbons).  At this point things became a bit confusing in the team scores, as two squads (Cardinal Gibbons and Bethesda-Chevy Chase) were wearing identical tops (and Foreman had on the same one, as well).  That led the spotters into thinking that Gibbons was making a powerful move forward, when in fact it was Caroline Beakes (Bethesda-Chevy Chase) that was really moving up the ranks.

Frazier looked strong all the way to the finish, although her lead did diminish somewhat.  That could have been due to the hill, or could have been a product of the duel going on behind her.  Christen eventually went by Molloy for second place, and it seems like the two spurred each other on over the final 1000 meters.  Bethel waited for the final stretch to overtake Dickerson, and that meant that the top 5 finishers were also the individual qualifiers to Oregon. After being behind by a fair bit in the early going, Tatnall rallied to challenge Assumption for the team title.  Alas, they fell just short, and the streak of four straight NXN SE championships for Tatnall was over by the slimmest of margins, a single point.  Credit goes to the Delaware girls for showing great class on the awards stage after what was surely a bitter disappointment for them.  Ditto for the squad from Louisville who showed equal character in taking the championship; you got the sense watching them that, although very happy, the Assumption girls know that they still have work to do (and that Tatnall will be gunning for them in Portland).  Morgantown had a very strong final mile to get into third place, with Lake Braddock (running without top gun Sophie Chase, who was at Foot Locker South) finishing fourth.  There is a very good chance that Lake Braddock would have won the meet had they been at full strength, which just goes to emphasize what a difficult choice it can be when an elite individual is also on a top-notch team.