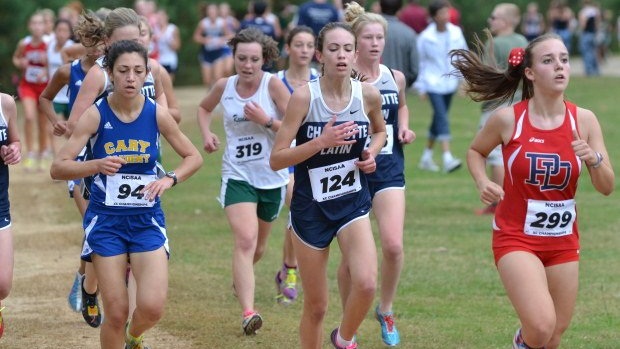 Once again, the independent schools staged a series of races as competitive and exciting as any public-school competition.

Individually, this was a two-man race from the start, with McKinley Gray (Epiphany School) and Connor Jones (Wayne Christian) side-by-side early in the first mile.  With only three runners scoring for each team, position near the front was critical, and Hickory Christian had three in the top 6 after the mile mark. 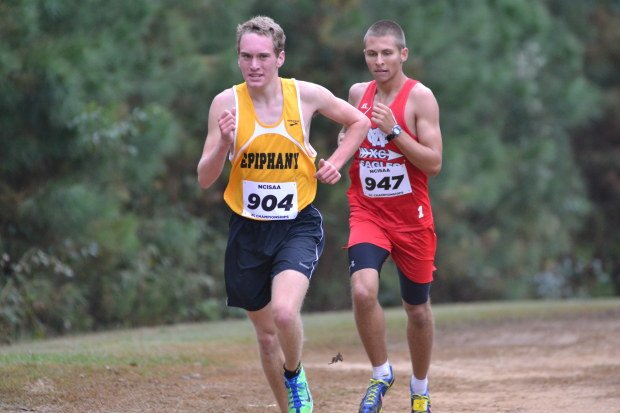 Jones made his final move at the base of the second hill, and was able to sustain the momentum all the way to the finish line for the individual title.  Gray finished second, and after him there was over a minute to the next runner; that shows just how hard the front two pushed each other throughout the race.  That third-place runner was Andrew Tysinger (Hickory Christian), sparking a 3-4-6 finish that earned his team the overall championship. 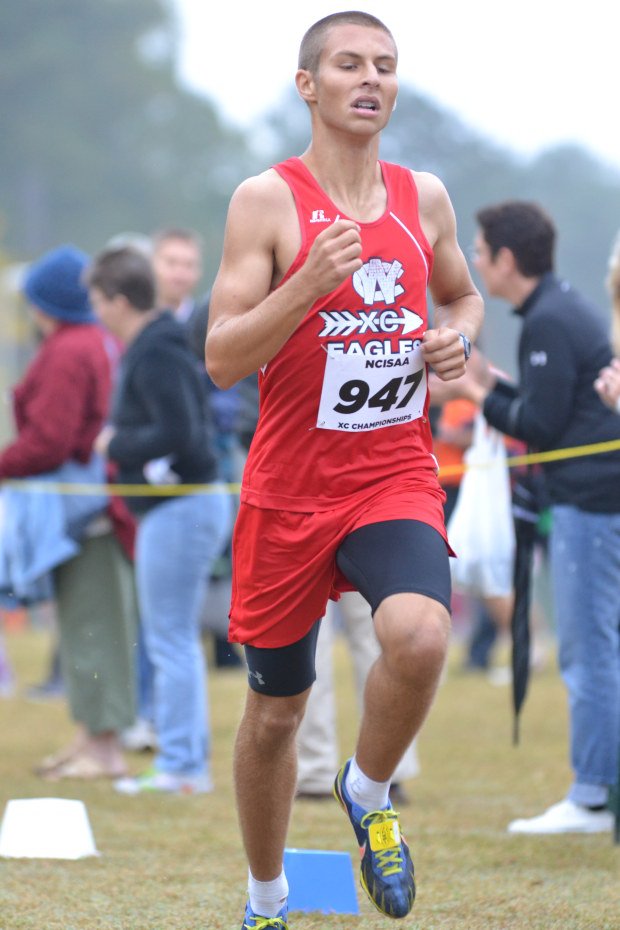 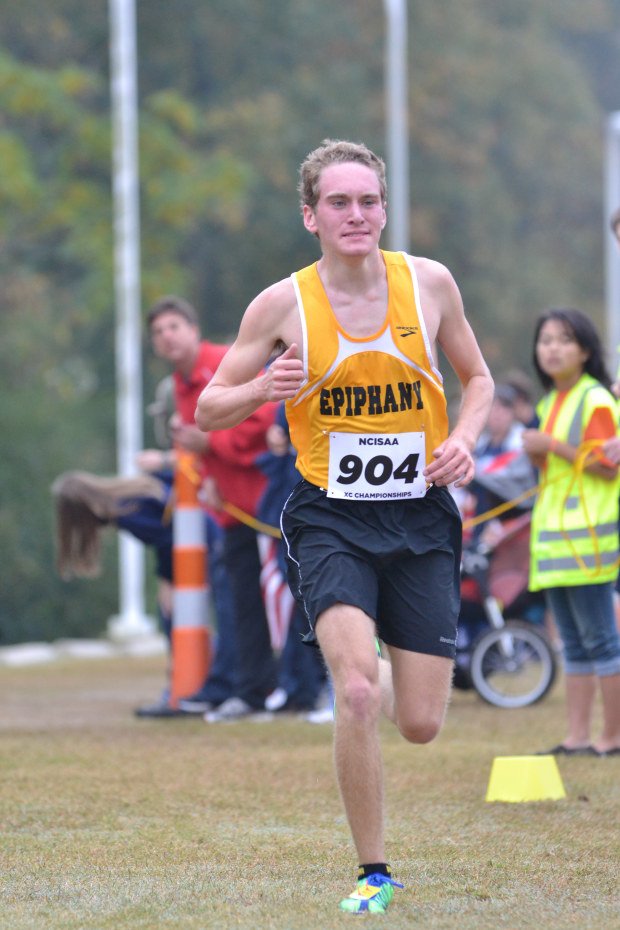 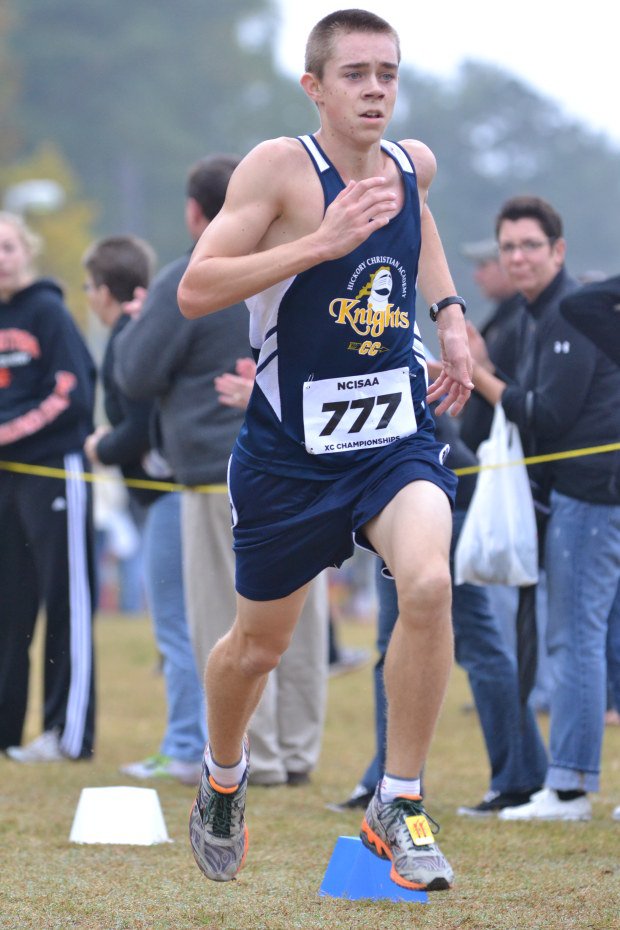 Lake Hoard (Epiphany School) took the lead shortly after the downhill rush from the starting line, and she never relinquished it.  Likewise for Olivia Cummins (Shannon Forest) and the second position.  Behind those two, though, there were some interesting changes throughout the race.  The early competition for third was between Hannah Russo (Epiphany School) and Abbey Crosten (Cape Fear Christian); the positions of Hoard and Russo had Epiphany in the driver's seat at the midpoint of the race. 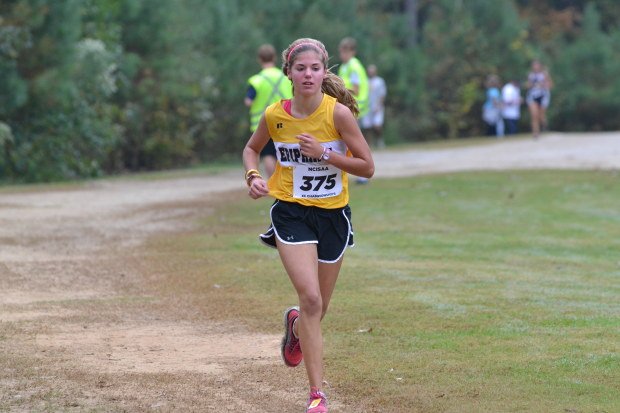 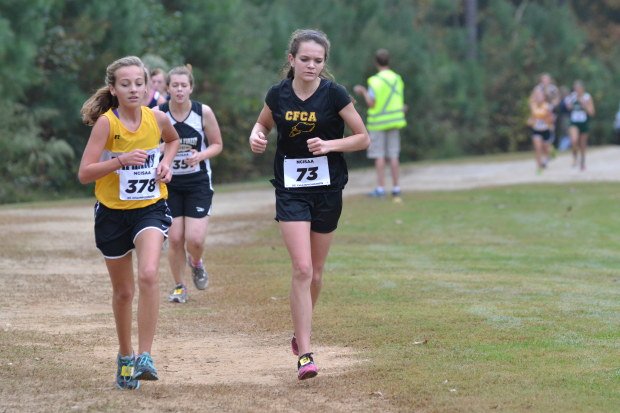 Hoard, and 8th-grader, clocked 20:22 running solo pretty much the whole way, winning by a whopping 1:43 in the the process.  Cummings stayed in second place, but was somewhat threatened at the end by fast-rising Amber Meadows (Hickory Christian).  Her move up the standings pulled Hickory Christian into a tie with Epiphany, and Hickory Christian won the tiebreaker with their fourth runner. 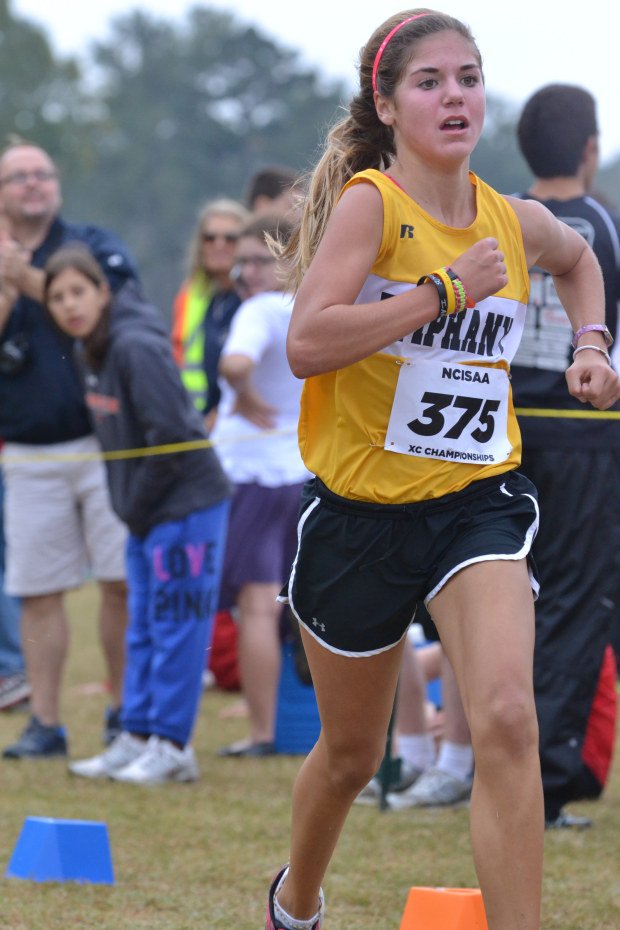 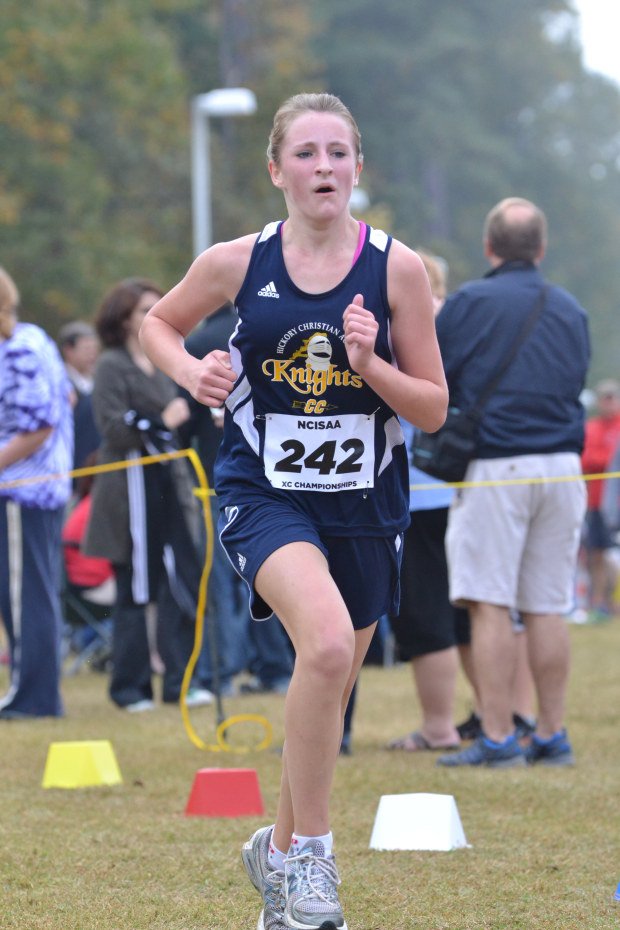 As expected, defending champion Trevor Sleight (Carolina Day) jumped out to an immediate lead.  Josh Thornburg (Asheville Christian) made a race of it, though, staying close through the midway point of the race before Sleight steadily pulled away.  Coming up from the mile mark, Asheville Christian was in the lead for the team title, as they also had Sully Pierce in third place. 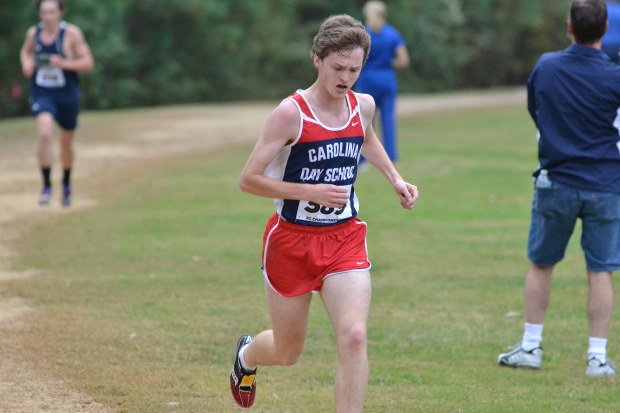 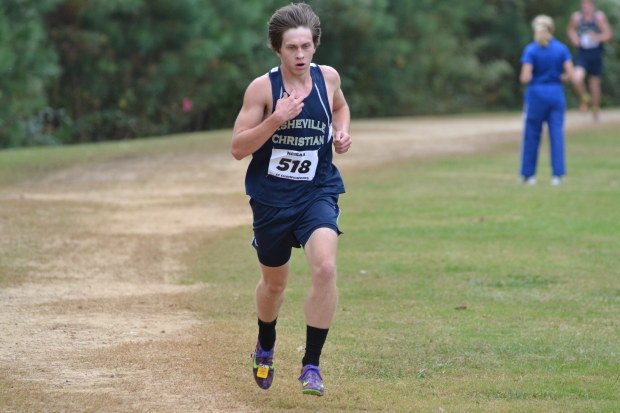 After the big loop was completed, Sleight made his way up the final hill to the finish all alone, running 15:33.  Thornburg held onto second, just under a minute behind.  Behind him, two runners from defending team champions Grace Christian (Alex Dolwick and Ian McPherson) had moved up into third and fourth over the final mile, keying their squad to a repeat title. 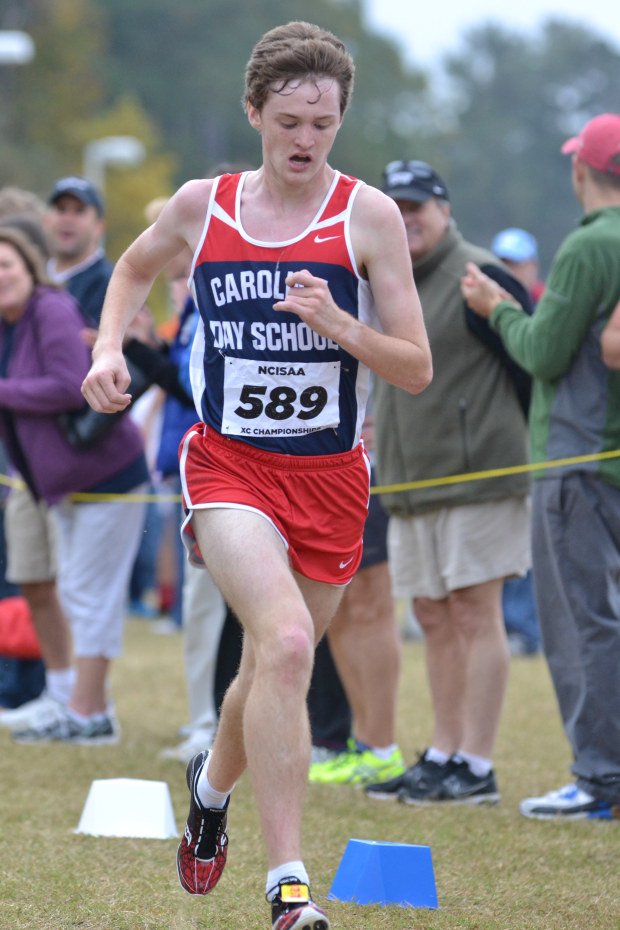 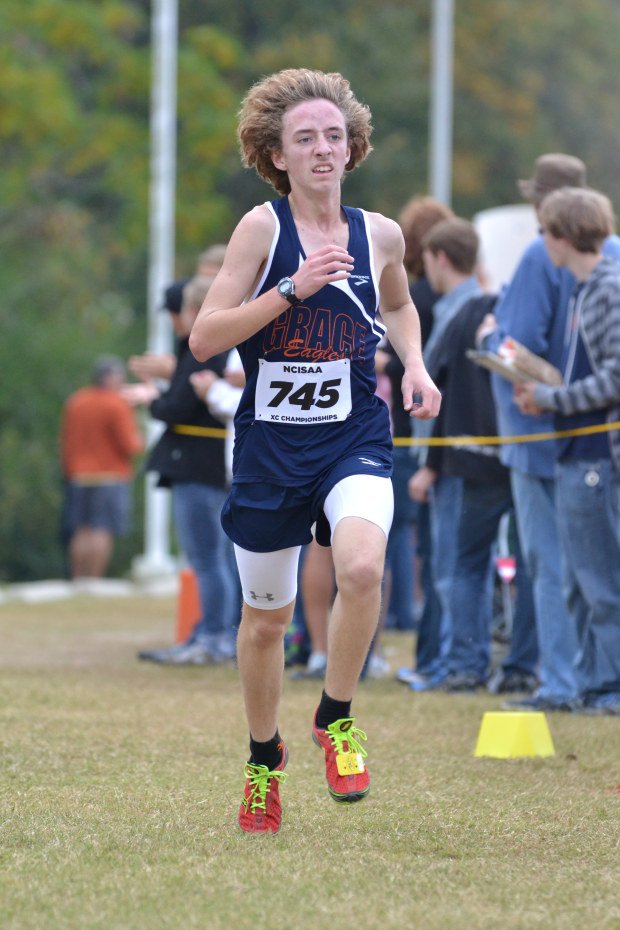 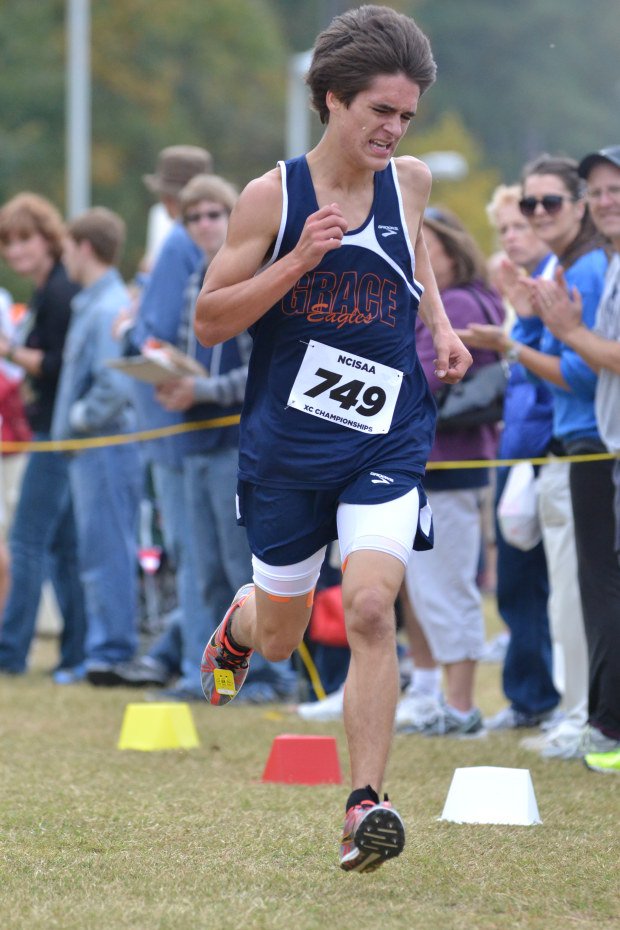 This race was the most competitive of the morning up front, as there were four girls in the lead pack well after the mile mark.  Katarina Pibl (Grace Christian Raleigh) held a slim lead over Melissa Zammitti (Davidson Day), with Marissa Bishop (Cary Christian) tucked right behind them.  Bishop's teammate Caroline Stogner was close behind in fourth, with Lindsey Banks (Asheville Christian) a bit back. 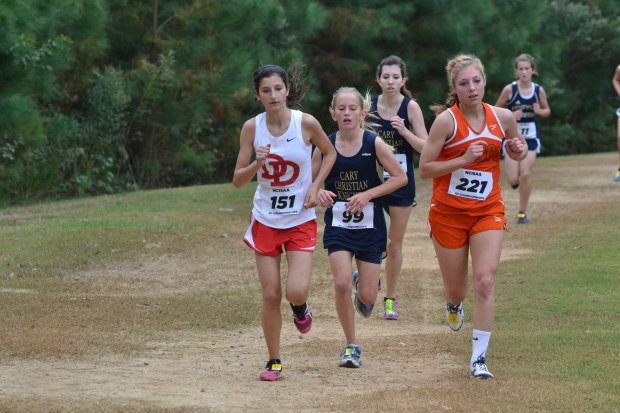 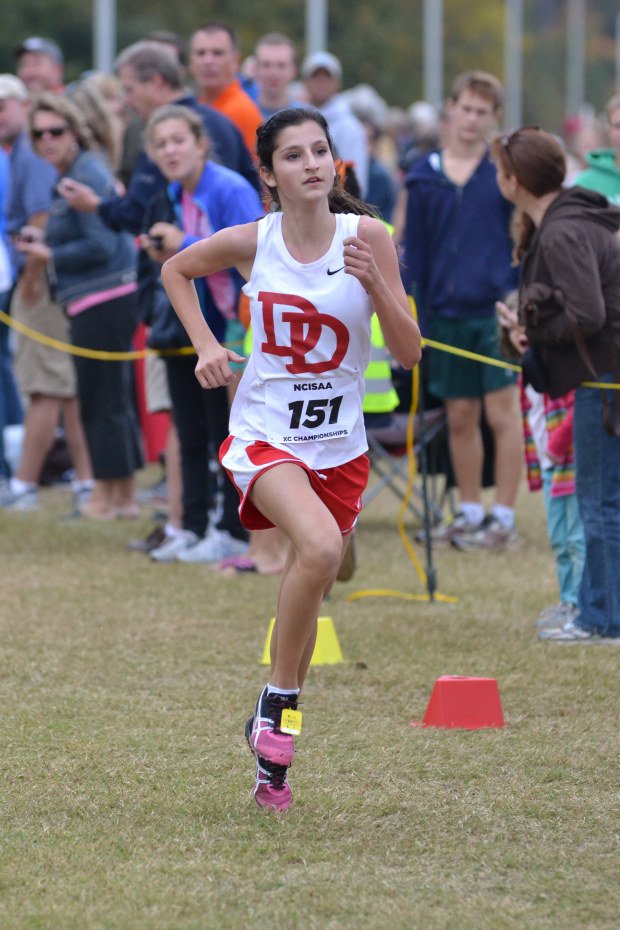 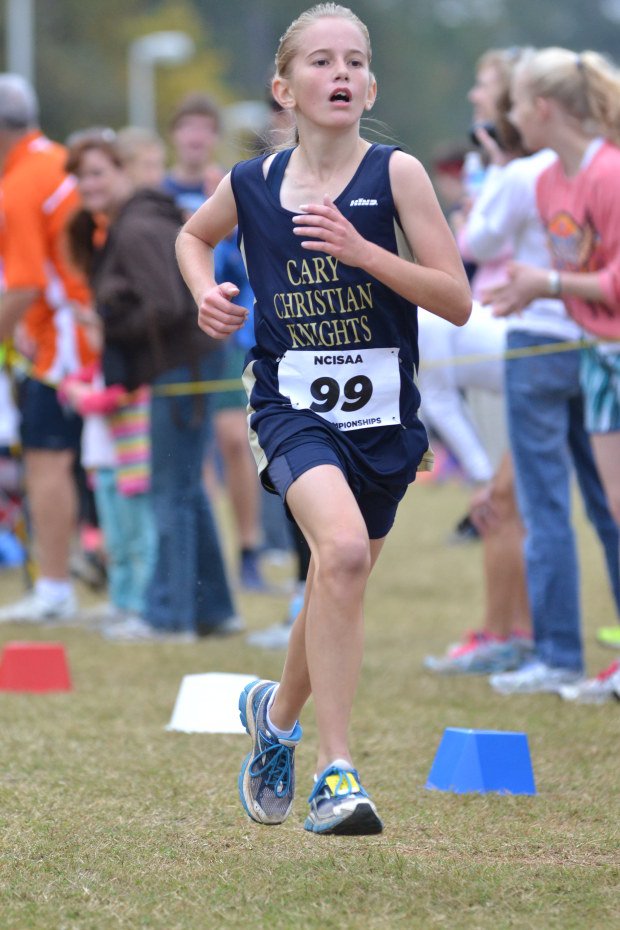 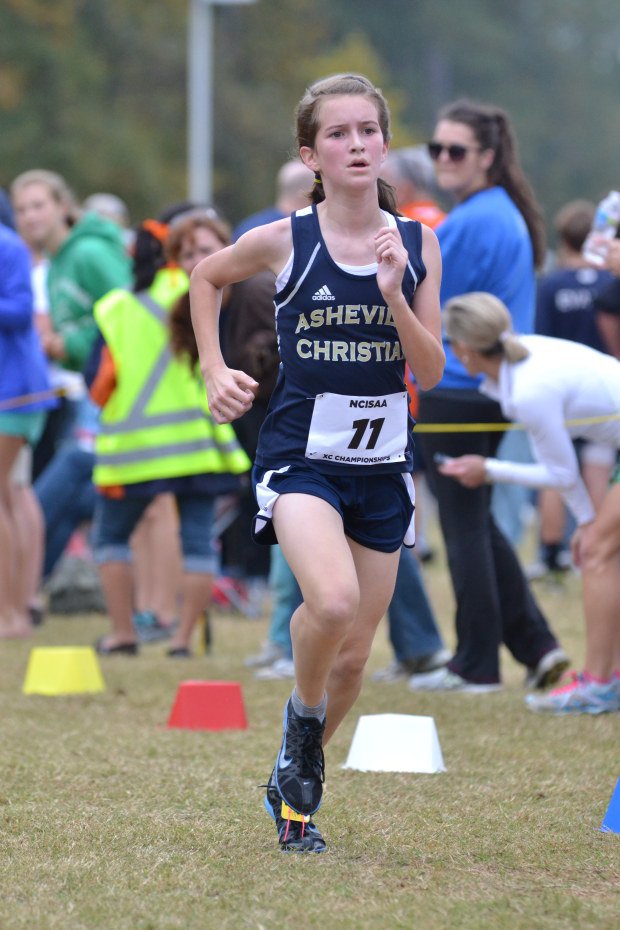 NOTE: I had a card error occur that caused me to lose all photos from this race (switched after 3A girls race).  I also lost video of the start of the race, but there is video of the finish.

The main point of intrigue coming into this race was Colin Gowin's fitness, as the Cary Academy senior had spent some time cross-training to head off a shin injury.  It turns out he was still in pretty good race shape, as he ran 15:45; however, he was a little bit off, and that was enough for Ben Huffman (Providence Day) to take the title.  Huffman also dropped the day's best time, running 15:23 despite breezy conditions.  Clayton Wilson (Greensboro Day) finished third, while Nick Linder (Providence Day) was fourth.  Huffman and Linder were able to spark their team to an 11-point win over Asheville School, which failed to put a runner into the top 5 after a very strong season.

Eliza Dekker went straight to the front of the race as expected; the Durham Academy sophomore, the defending champion, has been running well despite some literal growing pains lately.  Gabby Merrit (Greensboro Day) was also hurting coming into this race, and apparently wasn't sure if she would be able to run until the gun fired, but she still engaged Dekker early and stayed close to her throughout the race.  The real excitement, though, was happening in the four-girl chase pack, which contained Maddy Ringenbach (Ravenscroft), Emma Brown (Providence Day), Jennifer Stephenson (Village Christian), and Melanie Ng (Arendell Parrot). 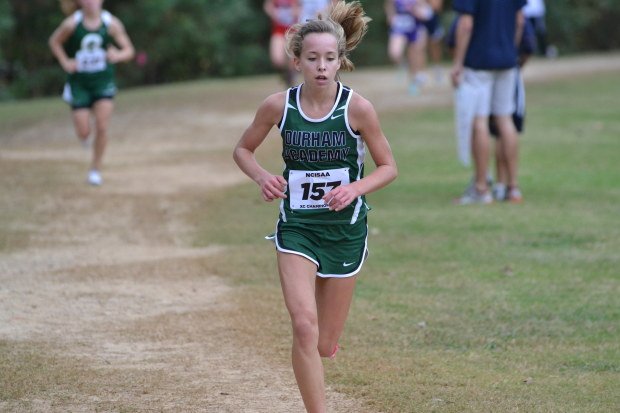 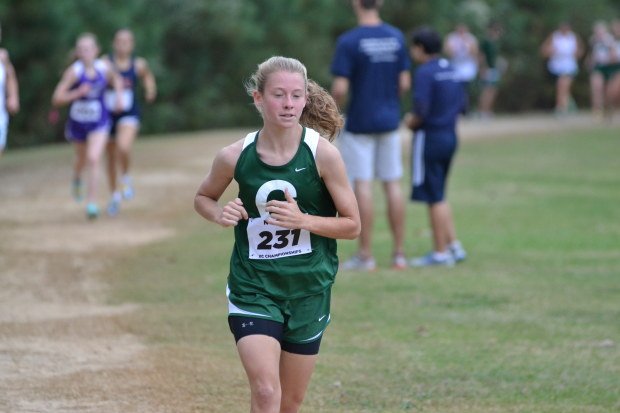 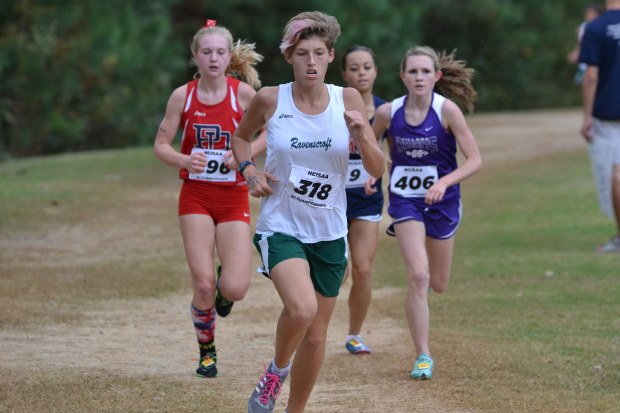 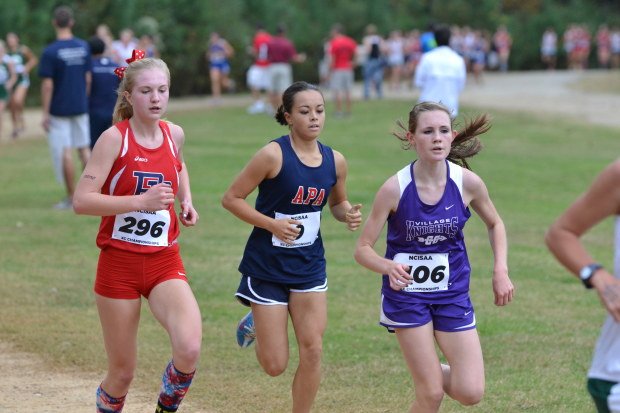 There was little change in the top 5 all the way to the finish, with Dekker winning in 18:10 and Merritt second in 18:21.  Ringenbach held onto third, while Stephenson and Brown were fourth and fifth.  As the front group strung out over the last half of the race, the excitement shifted to the large main pack, where Cary Academy and Ravenscroft were battling for the team championship.  Emma Astrike-Davis (Cary Academy) led a three-girl charge supported by enough depth to win the title. 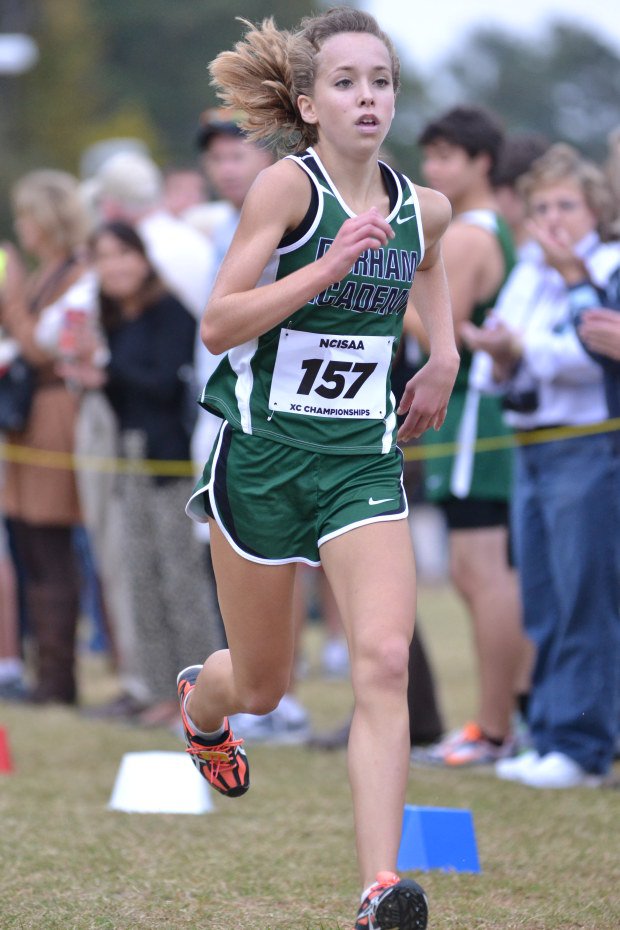 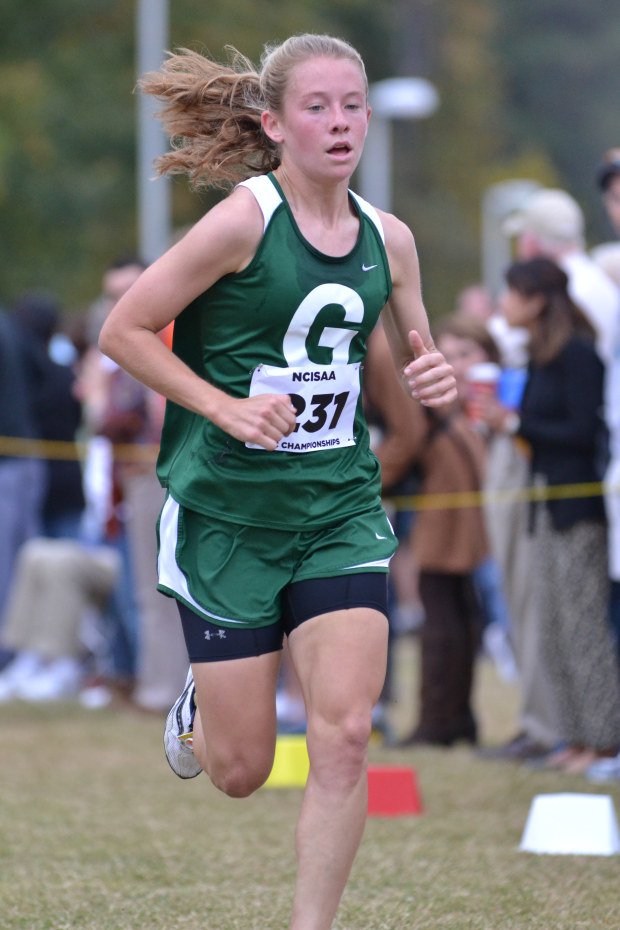 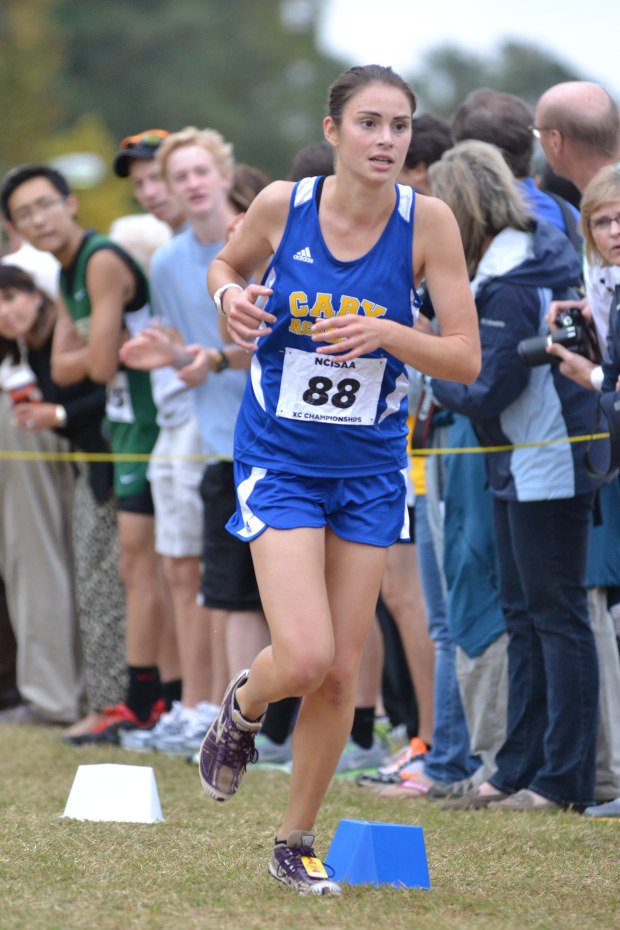