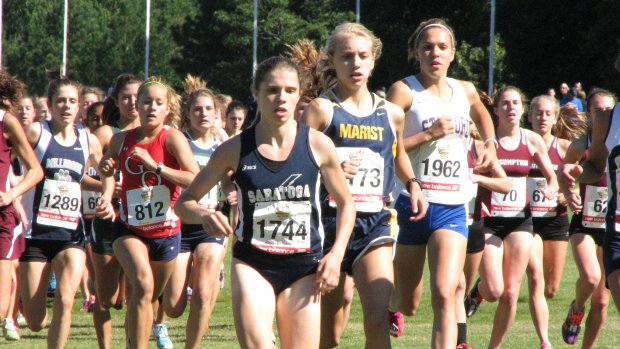 With teams ranging from Massachussetts to Florida, this meet always alters the mid-season landscape on a national level.

(Come here for photos and videos this weekend)

Christian Brothers (NJ) is the top team in the country this fall according to the MileSplit Team Rankings, and though they have run on challenging courses they have been putting up very strong performances.  US #7 St. Xavier (KY) defeated Broughton (NC) at the Trinity/Valkyrie Invitational two weeks ago, and the Caps will be out for revenge now that home course advantage has switched.  Cardinal O'Hara (PA) comes in eigth in the MileSplit rankings, while US #18 Blacksburg (VA) will also be right in the mix (and they have some famililarity with the course after coming down for the adidas XC Challenge earlier this season).  Brentwood HIgh (TN), Cary (NC), Lexington (SC), and Brentwood Academy (TN) form the next tier.  Mount Tabor, second in the North Carolina 4A state meet last fall, hasn't raced in a month and will be looking to move up in the NCRunners team rankings with a top-10 performance here.

Jacob Thomson (Holy Cross KY) is ranked 3rd in MileSplit's Individual Rankings; he won the Trinity/Valkyrie Invitational two weekends ago with the #1 time in the country so far.  Watch out for US #8 Sean McGorty (Chantilly VA), who has run on challenging courses but has dominated both the competition and the course records so far this year.  Andres Arroyo (Colonial FL) comes in at 12th in our national boys' rankings, and like Thomson he has a sub-15 PR.  US #17 Bakri Abushouk (Cary) tested his mettle on WakeMed's course two weeks ago, taking the race out in a blistering 2:03 before getting nipped at the line.  Thomas Madden (Skyline VA) is ranked 19th in the country, although he has run more challenging courses so far this year, and so this could be a breakout time for him.  Brock Baker (Oakland TN), William Roberson (Broughton  NC), Tony Morales (Lexington SC), Sam Lewis (St. Xavier KY), and Brentwood High (TN) teammates Taylor Caldwell and Alec Thomas have all run under 15:30 this season, which should make for a very exciting first main pack.  Brendan Shearn (North Schuylkill PA) also has the potential to be in that front group.  From a local perspective, keep an eye on Dalton Nickel (Mount Tabor NC), who hasn't raced since August 25th and could make a big jump forward.

(Does not include individuals)

Saratoga Springs (NY), a regular with multiple championships at this meet, enters the race ranked seventh in the MileSplit Team Rankings.  Close behind (and getting the nod from the virtual meet) is Assumption (KY); those two teams should have an excellent battle that could shake up the national listings a bit.  US #17 Oakton has not put up fast times yet this year, but that could be due to running on difficult courses.  Likewise, this appears to be the first major race for perennial power Tatnall (DE), currently listed at US #20.  Bowling Green (KY) has fast times so far this season, and could insert themselves into the top 5 (and possibly the national rankings) with a good race.  Local squad Cardinal Gibbons (NC) has won on this course once already this year, while cross-county rival Green Hope (NC), though somewhat depleted due to injury, has nonetheless run well enough to rank first in the state.  Those two will be joined by Walton (GA), Morgantown (WV), Centerville (OH), and Peachtree Ridge (GA) in the hunt for top-10 finishes and greater consideration in the national rankings.  Of loacl interest, Broughton's girls are getting closer to full strength, while Ardrey Kell continues to improve.

This race does not hold anyone in the current top 25 of the MileSplit Individual Rankings, but there is still no shortage of firepower up front.  Hannah Long (Eureka MO) has the 4th-fastest time in the nation so far this year, and will be running to prove she belongs in the rankings.  Taylor Driscoll (Saratoga Springs NY) has the #17 time in the country, and she will likely be paced by Assumption (KY) teammates Bailey Davis and Katherine Receveur.  Julie Wollrath (Holy Trinity FL), Katie Fortner (Cave Spring VA), and Allie Klimkiewicz (Oakton VA) all ran fast times last year, but none has put up a big mark yet this season;  Megan Sullivan (Broughton) has run under 18 this season, and should be in the front pack, as well.  Keep an eye on Maggie Drazba (St. Mary's WV), who runs on tough courses most of the year but has the potential to put up big times on faster layouts (as evidenced by her 10:27 3200 last spring).  A few more names to consider: Reagan Anderson (Tatnall DE) and Estela Smith (Saratoga Springs) both have PR's under 18 minutes, while Brynn Harshberger (Morgantown WV) and Carloyn Bethel (Hidden Valley VA) join them on the national watch list,  Of local interest, Maura McDonnell (Green Hope) hasn't really been turned loose yet this year, and if she is there is definitely a sub-18 lurking, while Sydney Foreman (Ardrey Kell) would like a chance to prove she can hang with some of the nation's best.

(Does not include individuals)

Ryan Thomas (Albemarle VA) ran 15:50 last year, and that makes him a threat to win in a race that hasn't got a single individual that has broken 16 this year.  That also means this could be an exciting race to watch, without much in the way of breakaway runners but sporting a big, close front pack.  Drew Navarro (Millbrook NC), Zach Chase (Christiansburg VA), Nick Tyrey (Cardinal Gibbons NC), Mihret Coulter (Apex NC), Michael Barr (Bishop Kenny FL) should all be in the lead group, having run under 16:20 this fall, plus there are several more who have run in the 16:20's.  Watch out for John Crossley (West Carteret NC), who has great closing speed based on his strong 800 time, and has appeared to be ahead of last year's low-16 pace so far this season.

Local squad Millbrook (NC) grades out best in the virtual meet, but that is always a dangerous prospect this early in the season, as many teams may not have run all-out yet, or might not have run a course as fast as the big courses in North Carolina.  Even with their top 7 running in the Race of Champions, St. Xavier (KY) still has a chance to win this race; imagine the bragging rights that would come with wins in both races!  North Carolina schools Cardinal Gibbons, Apex, and Pinecrest are all legitimate state-level teams.  Bishop Kenny (FL) also has a solid squad, and could get into the top 5 in this race.

(Does not include individuals; St. Xavier is running a B-team, so remove their top 7 for the best result)

This race doesn't have anyone who has broken 19 mintues yet this season, although that seems very likely to change on Saturday.  Morgan Ainslie (Lassiter GA) has come the closest running 19:03, and teammate Marcie Merriman isn't far behind her (Merriman has a PR of 17:51, so keep an eye out for her breakout race).  Newcomer Emily Pettis (Millbrook NC) has run very well so far this year, while senior Rachel Zavakos (Centerville OH) is approaching the end of her high school cross country season and looking for the best times of her career.  Mackenzie Wilson (Bolles FL), Bridgette Harrell (East Forsyth), Alexa Jennings (Centerville), and Lainey Studebaker (Centerville) have all run in the 19:20's this fall.  A few more who should much faster than their current times would indicate: Kara Dickerson (Midlothian VA) ran 18:08 last fall, while Blake Dodge (West Carteret) has an 18:29 PR and very good track speed for her closing burst.

Centerville (OH) looks like the class of this field based on 2012 times, but there may be other strong teams lurking that simply haven't put up big marks yet this season.  Assumption (KY), running their B team, will nonetheless contend for the top 3 in this race, as will local squad Millbrook (NC). Lassiter (GA), Green Hope (NC, also running a B-team), and Midlothian (VA) should be racing for top-5 finishes.  Mount Tabor (NC), if running with #1 Kayla Montgomery, would have been a contender for the top 5; however, she is running in the Race of Champions, and her remaining teammates should still be in the top 10 here.

(Does not include individuals; Assumption and Green Hope are running B-teams, so remove their top 7's for the best result)