Coaches and athletes in the Central Piedmont Conference (and Forsyth County, as well) have always been extremely supportive of one another.  Sharing training techniques, cheering for other teams, and commiserating over injuries or losses are all common.  Because of this, I got to witness first-hand a story that was at once gut-wrenching and heart-warming.  The events in this story touched people from at least 5 different schools, and most certainly changed their views on competition, friendship, and even life in general.


2010-2011 was a very difficult year at Reagan High School.  The school year began with the unexpected death of a teacher and coach in September.  During the winter, the Raider running program dealt with a double blow, first from a top athlete leaving the team for personal reasons, then from losing a friend and teammate to tragedy.  In January, senior cross country and track team member Nick Doub (farthest left in the picture) passed away after hitting a patch of black ice during his morning trip to school.  March brought the loss of both another teacher and another student in separate but equally heart-rending incidents.

According to Chris Catton, Reagan boys' coach, "It was an aura of pessimism.  People were wondering, what's next?  It was the worst school year ever.  I think some folks don't always realize what an esprit d'corps there is in the sport of running, and how valuable those relationships are.  You don't last in a sport if you're not a tough person.  What we realized was that, to heal, we needed to work hard together and have time for our relationships to draw us together.  For a lot of our athletes, it was their first real experience with death."

Reagan parents, coaches, and athletes came up with the idea to host a meet in Nick's honor, hoping to raise money for a scholarship fund in his name.  Their lost teammate had been more than just a member of the squad, and had been the inspiration for the team saying, No Raider Rides Alone, after a scary episode of heat stroke in his sophomore year.  Meanwhile, the team found solace in practice and competition.  "The winter state meet, with Julie, Craig, and Jordan winning events, was a great moment for Reagan running in general," says Coach Catton.  "Nick is most missed at team dinners.  He was always making jokes, and he would always be the last guy to leave.  He was one of the last truly innocent kids, I think, with his autism and just his personality.  He was a Reagan guy through and through, and he really enjoyed being a part of things." 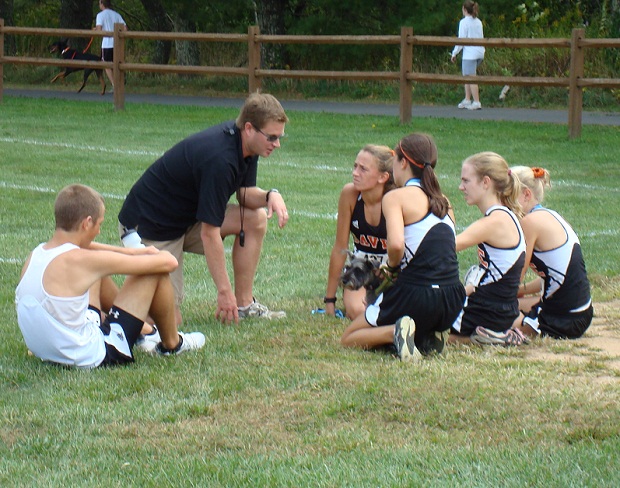 It had been a normal school year at Davie High School.  The members of the cross country and track teams had worked hard all year and shown significant improvement under the leadership of head coach and driving force Daric Beiter (with his athletes in the photo at right).  The girls' distance runners, in particular, had enjoyed two years of greater-than-usual success, ranging from a strong 4x800 in the spring of 2010 to a young, deep cross country squad in the fall, both of which resulted in trips to the state meet.  Anna McBride, then a sophomore, had been both beneficiary and catalyst for this momentum in the girls' program.  She had burst onto the scene in the fall of 2009 with a 19:20 at Wendy's, then followed that up by clocking 11:14 in the spring of her freshman year.  Along the way, she had grown extremely close to "Beiter," as his runners affectionately called him.

On the morning of Friday, April 1, Beiter died suddenly at the age of 37.  In the words of Devore Holman, fellow teacher and track coach, "Davie County Schools suffered a great loss in the passing of Daric Beiter last spring.  Not only did our county suffer the loss, but our track and field and cross country programs suffered the impact of losing coach Beiter."  The news spread quickly through the Davie community, even though the athletes were out of school for a teacher workday.  Members of the running program met at Tanglewood to share their grief, and then the students organized an impromptu afternoon vigil in the school's football stadium.  There, the team's coaches and athletes decided to go ahead and compete at their meet the next day, in honor of their coach.  "We went to the meet Saturday because that's what Beiter would want," said McBride.  "It was the hardest thing I ever did, but it turned out to be a positive."

Several CPC coaches attended the visitation for Beiter the following Sunday, and left wondering what they could do to ease the pain they witnessed in Davie's coaches and athletes.  "I remember thinking at Coach Beiter's funeral service how many lives Daric touched.  It was moving to see all of the photographs of Daric with family, friends, and his kids on the cross country and track and field teams.  As sad as I was, I couldn't help feeling that Daric would do it all over again, just the way he did, and this gave me reassurance.  Seeing firsthand how important our role as coaches is to the kids we work with was a little bit overwhelming.  I left the service feeling a sense of renewed purpose to be the best I can be for my kids, and was reminded of how significant and lasting the relationships we build with our teams are.  In my own mind, I think this is how Coach Beiter would have wanted it."

The next Thursday, Davie was scheduled to face Reagan and R.J. Reynolds in a Central Piedmont Conference meet.

When your rivals face this level of tragedy, it puts your own petty struggles in perspective.  R. J. Reynolds High School had had a difficult spring; injuries and illnesses took away a promising girls' season, while transferred athletes and lack of leadership had ruined the boys'.  Nothing they went through, though, even began to compare to the loss of a teammate or a coach.  Having lost football player Matt Gfeller three years prior, and having witnessed the way in which the community supported their school at that time, the track & field staff at Reynolds searched for a way to reach out.  They settled on the Southern tradition of using food as both a means for fellowship and a method of healing.

"Our school and our athletes' hearts were shattered into many pieces in the early morning of April 1, 2011," says Coach Holman, who worked with Daric on building the track team.  "We had a conference meet at RJR shortly after Coach Beiter passed away and RJR coaches, athletes, and parents provided our team with a meal after the meet.  The coaches and athletes showed our program love and support during very difficult times and for that we are very grateful.  We will never forget the kind words and caring that were given to us."

Reagan parents also contributed to the cost of the dinner, offering support for a situation they understood all too well.  Twin City Diner provided the bulk of the meal at cost, and many Reynolds parents added salads, drinks, or desserts.  The meal gave coaches and athletes from the schools a chance to bond, and proved that sports are about much more than just winning and losing.  Says McBride, "At dinner, the teams got to meet and make friends.  It was good to know that other people were there to try to help as much as they could."

The following Saturday, both Reynolds and Davie competed at Bishop McGuinness.  In a fitting ending to an emotional week, the girls' teams from the two schools tied for the team title.  The Reynolds athletes graciously allowed Davie to take home the first-place trophy, knowing it would be a symbol for much more than simply winning an athletic competition.  Shortly after, the meet planned as a memorial to Nick Doub was expanded to honor Daric Beiter, as well.  Hosted by Mount Tabor, the meet was a final show of the solidarity between programs from the same conference, rivals who would later that year compete against each other for team and individual titles.

Coach Patrick Cromwell of Mount Tabor explains: "Coach Catton and I discussed having a dual meet and doing a fundraiser in honor of Nick in January.  When Coach Beiter passed away just weeks before the meet was planned, we decided to change it to the CPC Memorial meet and invited area teams to celebrate both of their lives.  Prior to the meet Coach Catton and I both spoke from the heart about Nick and Daric and then all of the athletes were determined to perform well to honor them.  It was a somber start, but we made it through.  It was very refreshing to compete with nothing on the table but a gratefulness to just be together with our extended family of coaches, athletes, and parents.  The proceeds were split between both schools and went toward their respective scholarships that had already been set up."  That meet has now evolved into the Dash For Doobie, held during Nick's favorite season, cross country.

Coach Catton now sees the positives that emerged from so many negative moments.  "The thing I learned the most is how much people are willing to help you.  It was a tough time for our kids personally, but I think we really saw a lot of the bigger things about being involved in a sport."  Coach Cromwell agrees, adding, "Unfortunately, I think we all tend to forget how fragile everything is until you lose someone from your circle of people you work with everyday."