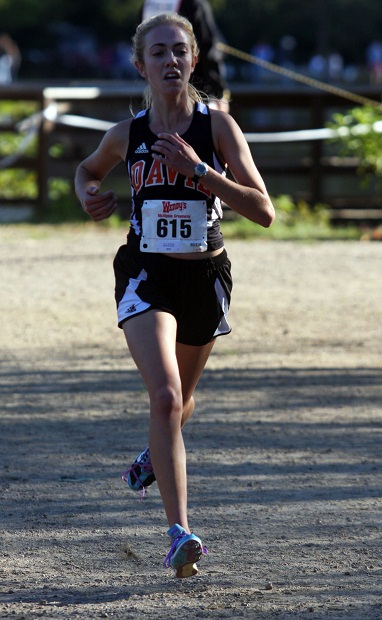 The individual race belonged to Anna McBride (Davie), who took control early and pulled away for a 40-second win.  Makes you wonder how fast she could have run in the invitational race, doesn't it?  Behind her came a pair of Hardin Valley (TN) teammates, Emma Mashburn and Hannah Feiten.  Madelin Talbert (South Mecklenburg) returned to the sub-19 club, one step ahead of new member Larissa Wood (AC Reynolds), who is in her first cross country season.  Then, the battle for the team title really began, as Providence and Eastside (SC) each had their top 5 runners among the next 30 places.  Led by top-10 finishes from Grace Sullivan and Bianca Bishop, a rapidly-improving Providence prevailed.  Eastside finished second, while Hardin Valley built on their two top-5 runners for a third place result.

This race was an out-of-state affair, as once again Hardin Valley (TN) put two runners up front.  Brothers Will and Aaron Templeton went 1-2 in impressive fashion, with Will running the fastest time of the day in 15:27.  Behind them came Jack Manesiotis (Hilton Head SC) and Alex Flores (Clover SC).  The top North Carolina finisher was Zach Nifong (Laney) in fifth, but he was over a minute behind the leader.  Manesiotis led Hilton Head to a strong victory, with their #5 finishing 21st overall.  Hilton Head took second, and Clover third.  The top North Carolina team was Lake Norman, which finished sixth. 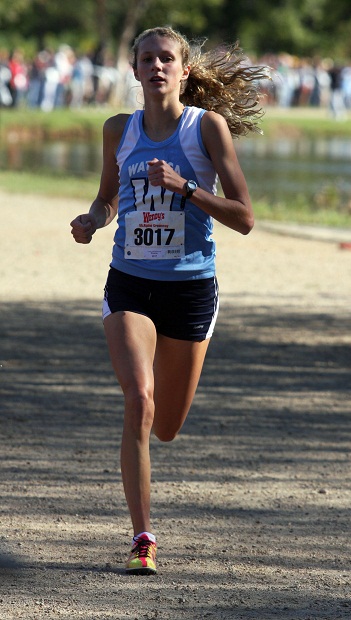 Though challenged through the first half of the race, Darby Middlebrook was able to pull away from a pack of four runners to take the win in 17:36.  Rising star Sydney Foreman (Ardrey Kell) held on for second, with Brooke Gordon (TC Roberson) third and Laura Miller (JL Mann) fourth, all of them under 18 minutes.  Ardrey Kell senior Kaitlin Kramer, the defending champion, showed that she is returning to last year's form with her 18:09 clocking and fifth-place finish.  Ardrey Kell set the tone with two in the top 5 and three under 19 minutes, taking a commanding win over TC Roberson.  Wando (SC) snuck into third place overall without a runner in the top 10, but with solid depth.  Chapel Hill's girls edged Watauga to round out the top 5.  Take note of just a few of the North Carolina runners with big PR's in this race: Tristan Van Ord 18:33, Lauren Pollard 18:38, Indy Reid-Shaw 18:47, Kathryn Hayes 18:49, Nina Pande 18:57, and many more.  Time to reset those rankings! 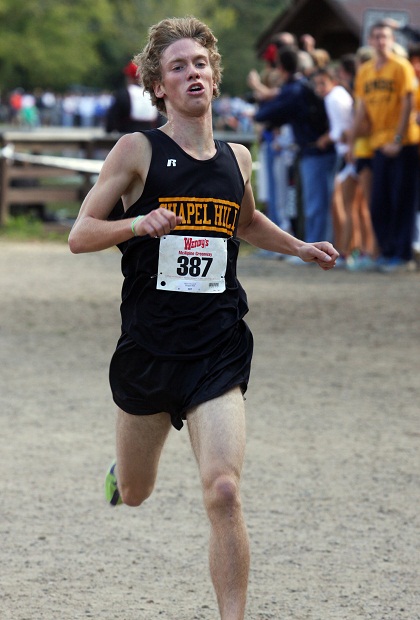 Orange County runners controlled the top of this race, with Mitch McLeod (Chapel Hill) pulling away over the last mile to win in 15:33 over cross-town rival Sam Miner (East Chapel Hill).  Jeremy Gower (West Johnston) had the breakthrough race we've been waiting for, dropping a 15:46 to finish third.  Madison Souder (Ardrey Kell) was right on his heels, while Chris McElroy (Dobyns-Bennett TN) completed the top 5.  McLeod and Chris Reeder (7th in 15:51) led their Chapel Hill teammates to the championship, defeating a Mount Tabor squad missing their #3 runner to the SAT.  Tabor had George Oliver and Josh Copus in the top 10 to secure second place over Ardrey Kell.  Flowery Branch (GA) and Mauldin (SC) rounded out the top 5 teams.  Also noteworthy was Wyatt Maxey's 15:52 PR, good for 8th place overall.

Mallary Price (Weddington) and upstart Natalie Andrejchak (Jay M Robinson) waged one of the closest individual battles of the day, with Price evntually winning for the second time in two weeks (but by a much closer margin this time).  A little bit behind them, three girls from the western third of the state showed how fast they can be when they come down to the flatlands; Allie Castro and Savannah Fornshell of North Lincoln, plus Catie Byrd (North Henderson).  That's the only race of the day that had NC runners dominate the top 5.  Fueled by those two top-5 runners, North Lincoln reasserted themselves as one of the best girls' teams in the state by taking the team win.  Charlotte Catholic, led by top-10 finished from Margot Corcoran and Emma Moore, finished second overall, with Robinson third and Weddington fourth.

Jonathan Bivens (Weddington) continued his strong season with a solid win today, 20 seconds ahead of East Rowan's Cole Honeycutt.  Bivens had a lot of support, as Hunter Roark was third and Tanner Glackin 5th, bookending Tanner Cook (Abingdon VA).  Ninth-grader Tanis Baldwin (East Henderson) had a fantastic performance to finish 6th.  Weddington's 1-3-5 start led to the most dominant team score in any of the races Saturday, as they won by 80 points over Westminster (SC).  North Lincoln, seeming a bit off from their expected performance, still finished in third, with East Rowan fourth.