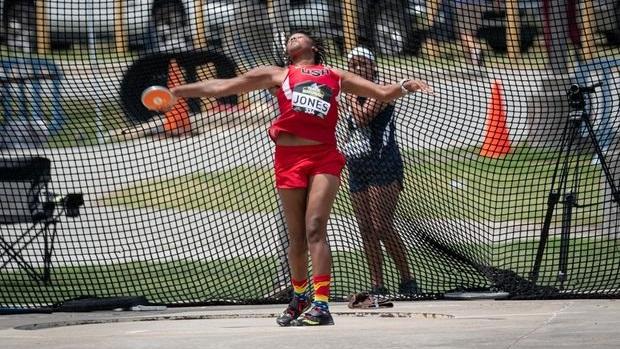 Jones is on the verge of being a star in this sport. She is already elite in both shot put and discus at the middle school level, and backed it up with wins in both events at adidas Middle School Nationals and AAU Region 25 12U. Her personal bests of 115-1 in discus and 41-8 in shot put are both U.S. No. 1 this season for her age. She also holds the AAU 8U shot put record, and is gunning for both of the AAU 12U records in Greensboro.

Johnson will be lining up for his final track competition of the season before he turns his focus to his first high school cross country season. He just won the AAU Club Nationals 14U 1,500m run clocking 4:12.47. At AAU Region 25, Johnson dipped under 2:00 for the first time in the 800m, taking the win in 1:59.21. The rising freshman at Lake Norman Charter will look to solidify himself as one of the top runners in the class of 2026.

Tolbert has been nothing short of a superstar -- and we mean beyond the state lines of North Carolina -- during her career at Highland Tech. Now, the Duke signee gets one more crack at the elusive 800m North Carolina state record. The record, standing at 2:06.66, is well within reach for Tolbert. She clocked 2:06.94 at the Brooks PR Invitational in June, finishing runner-up. Tolbert has gone sub 2:10 five times in her career, and she's looking for No. 6 to be a personal best, and new state record. She is only competing in the 800m, so she really gets to put all her energy into that one record she has been chasing for so long. The AAU Junior Olympic Games 17-18 age group record is 2:07.04 from 2016

Dorsey has already proven she can hang with the high school athletes. She won the NCISAA DIII 400m and 800m and took second in the 200m finals. She was the only girl to score points for her Fayetteville Academy squad and she led them to a ninth place finish as a team. She took home the wins at AAU Region 25 in the 200m, 400m, and 800m.

The NCHSAA 3A and AAU Region 25 long jump champion, Barringer will compete one final time before heading off to UNC-Charlotte in the fall. She has a wind-aided personal best of 19-10.25, which is all-conditions U.S. T-No. 28 this season. She has jumped over 19-feet three times this season, including a 19-9 leap at her conference championship. At AAU Region 25, she won the competition with a jump of 18-8.75, winning by over four inches.

In 2022, Branker proved to be one of the elite hurdles in North Carolina, if not the country. He captured the NCHSAA 4A 110mH and 300mH state championships in May and followed it with a win in the AAU Region 25 110mH. He holds a personal best of 14.32 from 2021. His season best of 14.34 came in a runner-up performance at All American Track Classic in April in South Carolina.

The freshman standout Dominique is taking to the track once more to chase some big times. During the high school season she was fourth in the 200m and fifth in the 100m at the NCHSAA 4A State Championship. She was runner-up in the finals of the adidas Nationals Freshman 100m dash. At the 2021 AAU Junior Olympic Games, Dominique was sixth in the Age 14 100m and 200m.

With each passing race, Mekhi Gammons is gaining perspective

Makeriah Harris: After the 200m, it's all heart

Shamar Heard is ready for his statement race at AAU