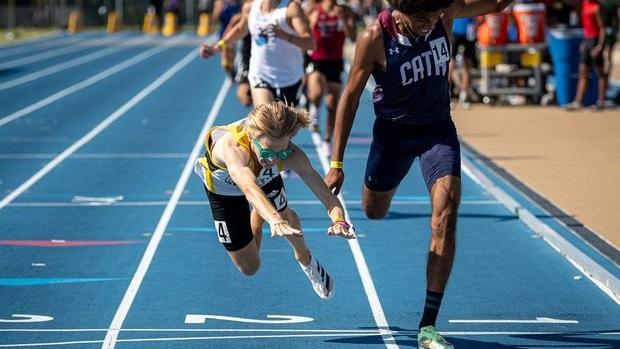 It was an action packed weekend at the NCHSAA State Championships. Take a look back at some of the most memorable races and interviews from the weekend.

Isaiah Monroe (Dudley) Recaps His Busy Day at NCHSAA 3A

Isaiah Monroe was a force at the NCHSAA 3A state championship, but the most impressive part is how humble and kind-hearted this young man truly is. He is a multi-talented athlete whose interests and talents off the track are even more impressive.

Tolbert had herself a busy day at the NCHSAA 1A state championship, lining up for the 100m, 200m, and 800m. The 2020 cross country state champion claimed victories in all three events, including a 2:09 solo performance in the 800m.

Avery Gaby Wants To Put East Duplin On The Map

After Gaby took home the win in the NCHSAA 2A 110H on Friday. "Mindset is everything." Hear what the junior had to say after an emotional victory.

Anchored by Shawnti Jackson, the ladies of Wakefield ended the NCHSAA State Championship weekend with a victory in the 4x400m, in dramatic fashion. The first three legs were tightly contested, as Wakefield handed off to Jackson just a few seconds behind Cuthbertson and even with Mallard Creek. Jackson exploded in the final 200m to quickly close the cap and roar home in NC No. 1 3:54.23.

Ryan Motondo (Walter Williams) Dives To The Line In 800m

Motondo made the decision to focus on the 800m at regionals and the state championship, which, for a runner who had focused on the longer-distances throughout his career, was quite the jump. In similar fashion to his NCHSAA 3A Mideast Regional victory, he used a roaring last 150m to slip into the lead and secure the win. He needed every inch of real estate to take down CATA's Manny Williams.