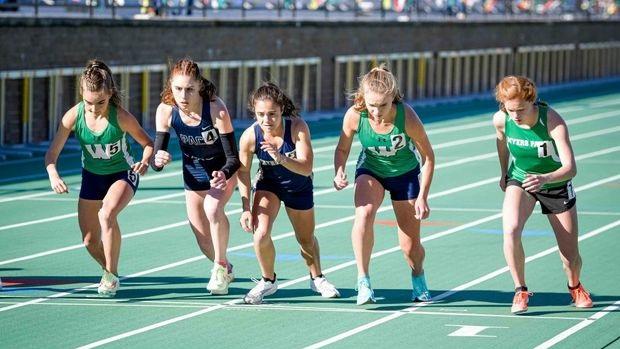 Nina Dominique (Hickory Ridge), Lauren Fleming (Marvin Ridge), and JaMeesia Ford (Jack Britt) have all been superstars in their own right this season, but a win over Jackson this weekend in any of these races will only bolster these athletes.

Akala Garrett (Harding) has been a superstar this season. She is the top seed in the 100H, 300H, and 200m. She is US No. 1 in the 100H and 300H (and 400H) this season. Her main competition in the hurdles come from Rolesville's Joslyn Hamilton, Cardinal Gibbons' Taylor McKinnon, Marvin Ridge's Aria Wegh, and Rocky River's Summer Washington.

Terrell Robinson Jr. (Mount Tabor) and Andre Whitaker-Myart (Northern Durham) have been building to this matchup for a long time. The only other time they shared the track was during the indoor 4A 55m dash, where Robinson Jr. was victorious. They are the top seeds in both the 100m and 200m, (Robinson Jr first in 100, Whitaker-Myart first in 200m.)

The 400m on the boys' side will be a race between Ha'Mir Hampton (Hillside), Max DeAngelo (Millbrook), and Killian Fahy (Cuthbertson).

Wake Forest's Jillian Weidner is competing in the wheelchair 100m and 200m.

Jacob Laney (Porter Ridge) has been arguably the best distance runner in the NCHSAA this year. He won the NCHSAA 4A Midwest 1,600m and 3,200m and is the favorite to do so this weekend. Weddington's Isaac Clark and Caden Townshend should have fresh legs to go toe-to-toe with Laney. Logan Dingman (Lake Norman) and Patrick Gibbons (Ardrey Kell) both broke 4:20 at their regional. The top four seeds are all from the NCHSAA 4A Midwest. Ethan Snyder (Marvin Ridge) will challenge for the win in the 3,200m with what should be fresh-legs.

The Cuthbertson distance squad is looking to score as many points as they can as they chase the team win. Charlotte Bell (Cuthbertson) has been nothing short of spectacular all season, and she sits as the top seed in the 800.

The 1,600m could turn out to be one of the greatest state championship 1,600m races we have ever seen. The top seed is Chapel Hill's Amelia Maughan, who ran 4:54.91 at regionals. The field includes 2021 outdoor 4A 1,600m champ, Lake Norman's Maddie Huecker, along with 2021 4A cross country champ, Apex's Sarah Mitchell. Seeded 4-5-6 are Cuthbertson's Bell, Justine Preisano, and Stella Kermes.

Lilly Walters (Hough) is seeded 9th but can very well find herself in all-state contention.

Hannah Rae Shaffer (Cardinal Gibbons) and Mary Bonner Dalton (Myers Park) will be running on fresh legs (Shaffer is listed on the 4x800m relay team) in the 3,200m. Shaffer is NC Frosh No. 2 all-time and Dalton is NC Sophomore No. 3 all-time in the 3,200m. Their times are both top 16 all-time in North Carolina for all grades.

Kermes and Lily Nasta (Cuthbertson) are representing the Cavaliers in the 3,200m. Other notables include Joiner Evans (Mount Tabor) and Olivia Bufalini (Laney).

The girls' 4x800m kicks off the 4A meet and should be as exciting of a race as they come. Mount Tabor holds the top seed, but Cuthbertson and Cardinal Gibbons can be forces on the track in this event. On the boys' side, the top 10 seeds are all sub 8:10.00.

The girls' 4x400m could decide the team champion. Cuthbertson is seeded 2nd and Wakefield is seeded 3rd. They sit behind top seeded Olympic.

The talented ladies of Hickory Ridge is chasing the state record in both the 4x100m and 4x200m. Meanwhile, Hillside's boys will face off against Mount Tabor and Cuthbertson in the 4x200m.

Spencer Williams (Davie County) is looking to solidify himself as the best thrower in state history. He broke the state record in the shot put last weekend, throwing 66-2.50. Now his is gunning for the state title, and the discus record. He is the top seed and heavy favorite in both events.

Tyler Glover (Ardrey Kell) and Elizabeth Sawicki (Cuthbertson) are the top two seeds in the girls' shot put. They were the only two to clear 40-0 at regionals.

Cora Busick (Reagan) and Zachary Moore (Sun Valley) are the lone competitors in their respective shot put and discus competitions.

Cheyla Scott (Butler) is chasing a state record of her own. She is only a quarter-of-an-inch off Morgan Smalls' 2019 record of 6-2.25. Scott is the top seed in the long jump, as well.

Ija Mumford (Parkland Magnet IB), Faith Spencer (Panther Creek), and Jasmine Greene (Olympic) are facing off for the final times in their career, all gunning for the triple jump title.

Jared Harrell (Panther Creek) is top seed in the triple jump and seeded 4th in the long jump. Tyson Adams (West Forsyth) has a near one foot advantage in regional jump over the rest of the field in long jump.