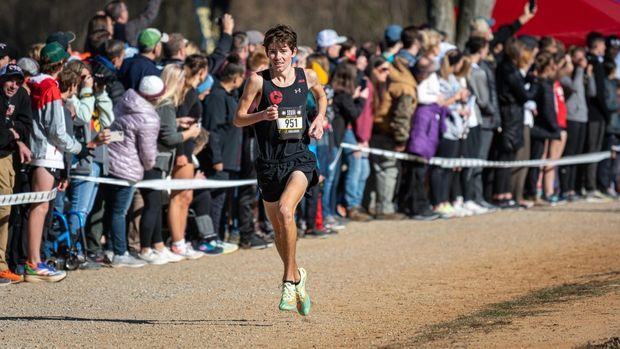 McAlpine Park once again played host to the 2021 Eastbay South Regional. Staying true to the meet's history, the top 10 finishers from the championship races qualified for the Eastbay National Championship in San Diego on 12/11!

The first race of the day was the Freshman Boys race and the boys from NC put on a show! Jack Anstrom (Seaforth) finished 3rd overall running a new personal best of 16:23. Anstrom was one of three NC boys to finish in the top nine. Lake Norman's Triston Rabon was 5th in 16:28, and Reagan's Tate Shore was 9th in 16:56.

In the Sophomore Boys race, South Rowan's Eli Julian gave a hard effort and it paid off with a 16:40 11th place finish.

Mooresville junior Ella Moore finished 18th in the Girls Junior/Senior race running 19:50 and A.C. Reynolds junior Ella Kepple was right behind finishing 21st in 19:57. It was a great race for Moore as she dipped under the 20:00 mark for the first time!

All eyes were on the next two races as the girls and boys championships were gearing up. Natalie Cook from Texas took off from the field and made it clear this was going to be a race for 2-10. Cook ran a No. 3 all time of 16:38 to take the Eastbay South Regional by over 30 seconds!

Although NC did not get any qualifiers there were some awesome performances by the home-state runners.

Lilly Walters (Hough) built off her phenomenal Dash For Doobie performance and secured a hard-fought 5000m personal best in her final XC race of her career. She clocked 17:40, good for 14th place overall and NC No. 3 this season! Right behind her was Myers Park sophomore Mary Bonner Dalton. This was only Dalton's second XC race of the season, with her first being an all-state run at the NCHSAA 4A XC State Championships. Dalton finished 17th overall and ran a huge personal best, clocking 17:44, good for NC No. 5 this year!

Maddie Huecker (Lake Norman), in just her third race of the year, clocked a new personal best of 17:51 to take 23rd. Providence Day School sophomore Carly Arrington was 30th in a personal best time of 18:05.

The Cuthbertson duo of Alyssa Preisano and Lillian Nasta looked strong in an elite field, and took home 33rd and 37th respectively. It was a great tune-up race to get them ready for the RunningLane National XC Championship in Alabama next weekend!

The championship race on the boys' side was much closer up front. In fact, all ten qualifiers were within nine seconds of each other. Porter Ridge junior Jacob Laney was just off the top ten, finishing 13th overall running 15:24. Nine of the 12 runners in front of Laney are seniors and will be graduating in the spring, leaving this field wide open for 2022.

The action was far from over after the championship races, as the Frosh/Soph girls lined up next.

Lake Norman Charter School's Lily Yampolsky was just a few seconds off her personal best from the NCHSAA XC State Championship, but still managed to run 19:44 and take home 13th! Abby Smith (Asheville School) was right behind her in 14th, running 19:45.

In the Senior Boys race, Jonathon Cross was the top boy from NC, finishing 9th and running 16:46. Jedaiah Ruhl (Cary Home Educators) capped off his fantastic season with an 11th place finish. Ian DeYoung (Covenant Day) was 12th in 16:48.