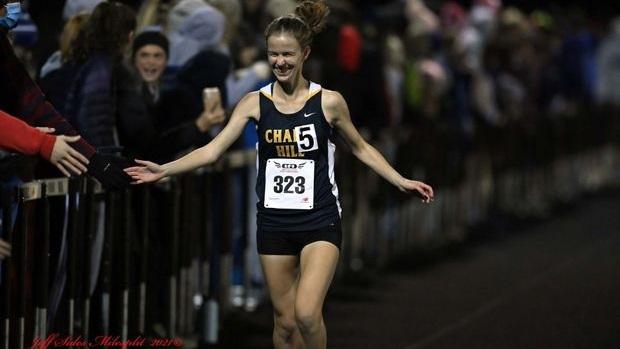 The weather was cool and the wind was calm, making for ideal racing conditions Saturday night in Pffaftown for the New Balance Dash For Doobie. The winners of the Nicholas "Doobie" Doub Scholarship were Hough's Lilly Walters, Pinecrest's Adrian Archer, and Gaston Christian's Adam Hoyle.

Zach Gilbertson (Pinecrest) ran a fantastic race in heat 9 to set a personal best and new school record, winning the heat in 9:20. In the 5th heat of the girls it was Weddington's Audrey Wright who came cooking down the homestretch to take the victory in 11:08.

The atmosphere for the elite heats had that stadium buzzing. As Jeff George announced each runner, they got their final strides in before it was time to get to business.

The gun fired for the elite boys and they took off! They came across 400m in a giant pack, splitting 1:08. Nathan Atchue (Franklin County, VA), donning his long hair, was at the front of the bunch. NCHSAA 4A XC champ Will Soule (Mount Tabor) was right on his shoulder as was Ethan Snyder (Marvin Ridge), Jacob Laney (Porter Ridge), and Elliott Kleckner (South Central). The same group kept together as they passed through 800m. In the chase pack right on the lead group's tail was Griffin Horner (Lake Norman) and Patrick Gibbons (Ardrey Kell).

Atchue kept the lead through 1,200m and brought the field through in 3:21. Their third lap was the fastest so far, splitting 1:04.

Atchue started to fade as they made their way to the 1,600m mark. They crossed through in 4:33, with Soule now looking to overtake Atchue. They hit the bell lap at 8:03 and Soule made the big move with only Laney daring to go with him. Horner and Gibbons were moving strong in the back half and caught up to the Kleckner and Snyder group. Soule was flying down the backstretch and held on to take the victory in a new personal best of 9:07.53! Laney held on for 2nd and ran a huge personal best of 9:09. Kleckner held on for 3rd over a charging Griffin Horner and Patrick Gibbons, running 9:14.04. Horner clocked 9:15.66 and Gibbons 9:15.77.

Was this the fastest indoor season 3,200m of all time?

Eleven new top fifty all time marks for indoor season ran in this one race, with 10 of them coming from the elite heat.

The previous record for sub 10:00 performances at New Balance Dash For Doobie came last year when 77 boys broke 10:00. This season this field shattered that and 99 boys dipped under the 10:00 mark!

On the girls' side, they were arguably more impressive!

In North Carolina history, only 53 girls have broken 11:00 in the 3,200m during indoor season. Thirteen of them came Saturday night at New Balance Dash For Doobie.

In a race that featured tons of lead changes and moves up front, it was bound to be a fast one. Defending NCHSAA 4A XC state champ Sarah Mitchell took the field out strong and 4A XC runner-up Hannah Rae Shaffer was sitting right on her shoulder.

The field came through 400m in 1:17 and they were almost single file behind the leader. Mitchell picked up the pace on the 2nd lap and they crossed 800m in 2:37. At 1,200m Mitchell had a few meter lead on Shaffer and Hannah Vroon (James Island, SC).

Former Pinecrest runner Vanessa Alder had a huge 5th lap and inserted herself with the leaders. Making a move with Alder was Kayla Werner (Pacers, VA) and she took to the lead with 800m to go. Powering through that 7th lap was Hough senior Lilly Walters. She came charging down the backstretch and took the lead with 500m to go! She turned on the jets with 300m to go and she really started to distance herself from the field. She was fighting to hold on as Shaffer came charging down the homestretch. Walters took home the victory in 10:33.07 and Shaffer was just behind in a fantastic effort running 10:33.87.

It is a new North Carolina Frosh Indoor Season state record for Shaffer and the 2nd fastest freshman time ran during the indoor or outdoor season in state history!

Don't let that outshine Walters though, as the senior took over 30 seconds off her personal best and now finds herself NC No. 5 all-time for the 3,200m during indoor season. Shaffer is now No. 7 on that list behind Walters.

NCHSAA 3A 3,200m state champ Caroline Murrell (Northwood) ran a new personal best and took 6th in 10:39. Her time is good for NC No. 14 during the indoor season.

It was a great day of racing as the record book was re-written and tons of runners hit the indoor state meet qualifying time!