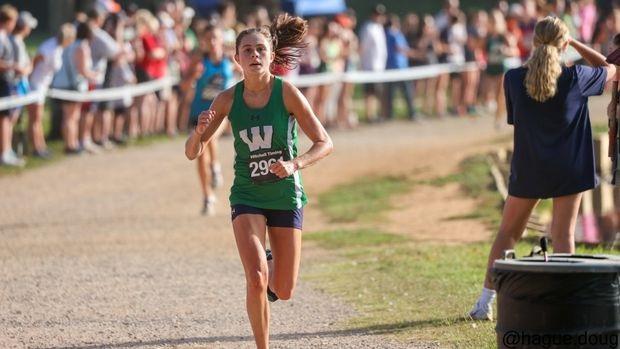 The 4A classification will split the afternoon session with 2A as some of the top rivalries in the state will finally be decided.

All season the team battle up front has been between Cuthbertson and Weddington. Each school has gotten the better of one another this season. Not only are they classification rivals, they are also in the same region and conference! They even split the two post-season races so far as Weddington took home the Southern Carolina Conference title 29-30. Cuthbertson got the final edge at the 4A Midwest Regional as they took home the title 43-47. They provided nine of the top ten finishers at their conference championship, and nine of the top twelve at the regional.

Alyssa Preisano was runner-up at the 2020 NCHSAA 3A state championship behind graduated teammate Madeline Hill.

Preisano has a personal best time this season of 17:57 which ranks her No. 5 in 4A. Lillian Nasta and Stella Kermes are X-factors for Cuthbertson as the duo has ran some fast times this season, but in order to win they need to finish within seconds of each other.

Weddington's leader Emma Jones has been right on Preisano's tail all season. The senior has a personal best of 18:02 and is ready to lead this team into battle. Jones actually was Weddington's No. 3 runner at the regional. Sophomore Grace Hanson has had a fantastic season and backed it up with a 3rd place finish behind Preisano and Kermes. Elizabeth Ritter was 4th overall in the region.

Their No. 5 runners at the regional were only two spots away from each other, so whoever's 5th runner gets the edge Saturday may walk away victorious.

The individual battle up front is going to be just as tight. Cardinal Gibbons freshman Hannah Rae Shaffer has emerged as a superstar this season, having ran NC Freshman No. 2 all-time 17:22 at the 4A East Regional. It was the freshman's 3rd time under 18:00 this season.

Cardinal Gibbons had a fantastic day as a team at 4A East and if they can keep the hot hand look for them to make a run at taking down Cuthbertson and Weddington for the team title.

Apex's Sarah Mitchell has been equally as impressive this season. The senior ran 17:31 at WakeMed to win the 4A Mideast title. It was also the 6th fastest time ever run by an NC girl on that course. Mitchell was 3rd last season in the 1,600m at the NCHSAA 4A Outdoor State Meet running 4:52. If this race comes down to a sprint, Mitchell might be the favorite in that scenario.

The boys will race at 2:40pm, and there is no shortage of star power in this one.

UNC commit Will Soule leads his Mount Tabor Spartans back to the state meet in 2021 after a 3rd place finish as a team last season. From that 3rd place team, they return all seven, as well as some new faces that have established themselves as the real deal. Soule was 4th last season running 15:59. This season, Soule has a personal best of 15:14 and is looking as strong as ever. He took home the 4A Midwest title over Porter Ridge junior Jacob Laney, Weddington's Isaac Clark, and Marvin Ridge's Ethan Snyder. All three of those runners are strong candidates to earn an all-state selection. Laney is NC 4A No. 2 this season and Snyder is NC 4A No. 4.

The battle between Mount Tabor and Weddington was closer than a lot expected. Tabor only got the victory by 1 point. Weddington used a 29 second 1-5 split to creep on on Mount Tabor and make a run. If they run like they did at their regional, then Weddington could be walking away Saturday with that banner.

Douglas Gledhill (Mount Tabor) has had a huge breakout season. The senior had never broken 17:50 heading into this season. He debuted at Friday Night Lights with a controlled 17:13. It wasn't until adidas XC where the cage was finally opened and Gledhill got to show his talents. The senior ran 15:44, good for a 90 second personal best! He topped that just a few weeks later at Great American helping Mount Tabor secure the victory clocking 15:39. He won the CPC Conference Championship over Soule as well a few weeks back.

Millbrook sophomore Tyler Surface took the 4A East crown in a NC 4A No. 2 time of 15:24. It is the NC No. 3 all-time performance for his grade.

New to NC this season from Connecticut, is Ardrey Kell's Patrick Gibbons. Gibbons won the 4A West Regional and is looking to make his first mark on the state this weekend with an all-state performance.

Hoggard took down Broughton and Cardinal Gibbons 84-87-90 at 4A East, so the momentum is on their side headed into this weekend, as well

A wild card to watch out for is Myers Park's Mary Bonner Dalton. She did not run at the regional and may run for Myers Park, who qualified as a team, at the state meet.