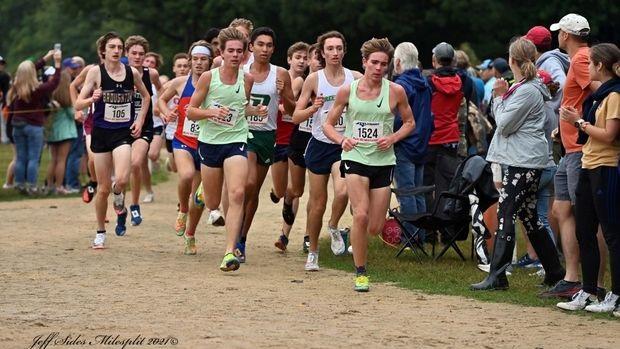 The boys will race at 9:40am and it should be an electric one. Up front, expect to see defending champion Ryan Motondo donning his bright yellow Walter Williams High School jersey. Motondo has had a fantastic senior season. The NC State commit currently sits NC No. 1 this season after his 15:09 performance at Great American in October. He was taken down at the NCHSAA 3A Mideast Regional however, by Carrboro's Quinn Baker and Orange's Spencer Hampton. Baker chased down Hampton over the last 200m and narrowly edged him for the individual title 16:17.34 to 16:17.60. Hampton would get the last laugh as Orange took home the team regional title.

Elliott Kleckner's first season at South Central has gone extremely well. The ECU commit has a personal best of 15:17 from the 2020 season, but proved in 2021 it was no fluke clocking five sub-15:40 performances. He is coming off a victory at the NCHSAA 3A East Regional running 15:24. Elliott's brother and fellow-ECU commit Cooper was 5th at their regional but I expect him to be a strong candidate for all-state. South Central was unable to overcome Croatan at the regional as Croatan took home the win 37-67. Their duo of Colten Rodriguez and James Wallace finished 3-4 and will both also be in contention for all-state selections. First Flight's Warner Campbell was 2nd at the 3A East Regional.

North Lincoln took care of business at the 3A West Regional taking down West Henderson and Stuart W. Cramer.

Cramer's brother duo of Zachary and Nicholas Willer went 1-2 in the regional and both are strong contenders to leave Kernersville this weekend with a state title. Zachary Willer took home the Friday Night Lights championship earlier this season on the same course taking down 3A opponents Kleckner and Motondo. Nicholas earned his own major victory, taking home the NCRunners Elite XC Invitational, also on the state meet course. Zach holds a personal best of 15:36 and Nicholas, 15:44.

West Henderson freshman Keagan Saft was 6th at the 3A West Regional but won the Mountain 7 Conference running 15:59.

The girls race will fire off at 11:00am, and like the boys, should be lighting fast up front.

Caroline Murrell (Northwood) has been unstoppable this season. The NC State commit is coming off a victory at 3A Mideast where she a ran a course record of 18:36. Murrell is undefeated against NC-competition this season, including a victory at Friday Night Lights and finishing as the top runner from NC at adidas XC and Great American. She's been under 18:00 twice this season and holds a personal best of 17:52. She is also the defending 3A 3,200m outdoor champion.

Bella Wood led North Lincoln to a 3A West team title with her individual victory. North Lincoln has looked strong all season with Wood up front and they are the favorites going into Saturday's competition.

Carrboro is coming off a victory at 3A Mideast over Durham School of the Arts. Senior leader Hannah Preisser was runner-up at the regional and is looking to be all-state in cross country for the fourth time! She won the 2018 NCHSAA 2A individual title as a freshman, so big-race environments do not scare Preisser one bit.