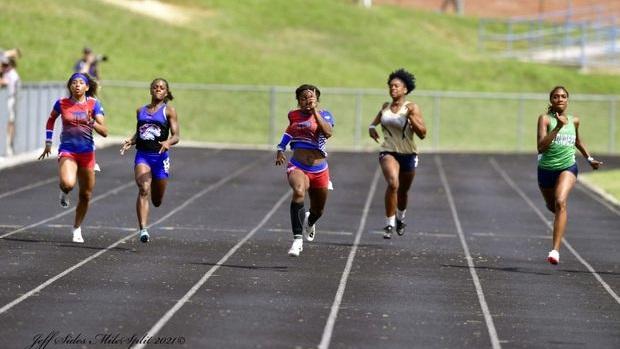 After a year hiatus due to the COVID-19 pandemic, high school athletes will finally travel to North Carolina A&T's Aggie Stadium for the long-awaited NCHSAA Outdoor State Championships.

As athletes enter the meet poised and prepared after spending the past year training hard in preparation for post-pandemic racing, spectators should anticipate highly contested events across the board.

Expect a tight race in the boys 100-meters to get the meet off to a fast start. Mount Tabor's Terrell Robinson Jr. and Dudley's Isaiah Moore enter with seed times separated by just two hundredths of a second. Prior to the showdown, watch for Parkland's Ai'yana Gray-Williams, who will look to win the girls 100-meter title. Currently, Gray-Williams is the only girl in the 3A classification to dip under 12 seconds this outdoor season.

Gray-Williams could come away with two individual state titles as she also enters the girls 200-meters as the top seed. In the long sprints, the boys 400-meters could be a tight race to the finish line as Christian Parker (Southwest Guilford), Aidan McNally (Cuthbertson) and Peter deJonge (Weddington) all have season personal bests below 49 seconds.

Perhaps the closest race could come in the girls 800-meters -- the top four seeds all come in with seed times of 2:19. The Cuthbertson family duo of Justine Preisano and Alyssa Preisano will look to go 1-2 and make a big contribution for the Cavs in the team title race. However, they will face staunch competition from Chapel Hill standout Amelia Maughn and Marvin Ridge's Caroline Blanton, which could make for a photo finish race.

3A cross country individual champion Madeline Hill will face off against Weddington's Emma Jones in the girls 3200-meters to cap off competitive distance competition on Saturday. Both Jones and Hill have gone under 10:50 this season, which will make for a strong race. On the boys distance side, Will Soule of Mount Tabor will look to potentially pull off the 1600-meter/800-meter double, as he enters with the top seed in the 1600-meters and the second seed in the 800-meters.

The relay events could potentially make or break team title hopes for certain schools. Cuthbertson enters as the favorite to win both the boys 4x100-meters and 4x200-meters, and could win the girls 4x400-meters and 4x800-meters as well. Cuthbertson could also win the boys 4x400-meters if they can close the miniscule gap on Southwest Guilford, who holds a season's best just a half second faster than Cuthbertson. However, it could be tighter on the girl's side as rival Weddington will look to compete with the Cavs in the 4x400-meters. Parkland girls look favored to sweep the 4x100-meters and the 4x200-meters, and Weddington will look to continue their historical success in the boys distance relays by winning the 4x800-meters.

Competition in the field events features many heavy favorites looking to hit impressive marks en route to individual state titles. Cleveland's Kyzaiah Stone could possibly hit the 7-foot mark in the boys high jump and win the event, and Chauneese Barringer of Northwest Cabarrus could hit 20-feet in the long jump to easily come away with a title. The closest competition could come in the girls discus, where Ashbrook's Camryn Massey and D. H. Conely's A'riana Crumpler have season bests within half a foot of each other.

For the team state title, Cuthbertson, who finished second in both the boys and girls team races in 2019, will look to potentially take the top spot on the podium this go around. The girls enter as the heavy favorites, and the Cavs can pull off the sweep if the boys can come away with key relay wins. But Weddington enters as the favorite to win the boys team title as they hope to defend their 2019 title pre-pandemic.