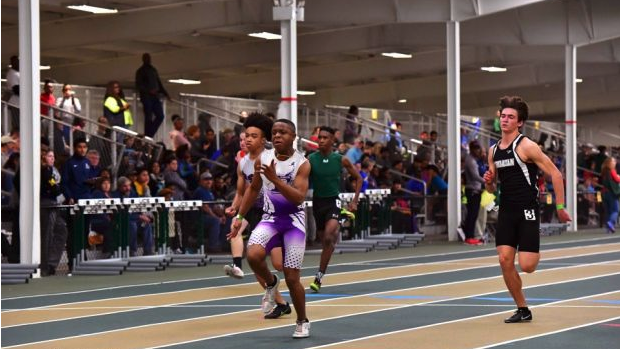 Last years top five 55m Dash athletes graduated leaving the event wide open for a new face to emerge at the top of the state leaderboard.  The finals at the NCRunners Holiday Invitational showed the event is still very strong with three North Carolina athletes under 6.46.

The prelims were very competitive with 7th through 10th place all coming down to the thousandths of a second at 6.66.  4th through 6th were just a little fastest at 6.63.  But Isaiah Gadson (Hickory Ridge/Charlotte Flights) threw down the fastest time of 6.45 just ahead of Royal Burris (Harding University) and Cameron Rose (Charlotte Heat/Hickory Ridge) at 6.51 and 6.52 respectively.

Gadson ran in his first ever indoor race and his prelim time of 6.45 was good for US#3 this year heading into finals.

Gadson's mark would be good for the North Carolina State Lead and also tying Kurt Powdar's (Oscar Smith) US#1 mark in 6.42.  Certainly not too shabby for your first ever 55m Dash and indoor race.

Gadson credits his success to switching his focus to track instead of doing football in the fall.  Gadson ran 10.75 for the 100m Dash the summer of his freshman year and ran 10.76 last summer.  He told us he was injured last track season and knew he was capable of much faster times.  His focus on his track career has certainly paid off early on.  You'd expect things to only be on the upswing from here as he adjusts to the 55m Dash and indoor track.

Gadson credits his Charlotte Flights teammates for a big part of his success.  "Everyday is like a track meet"

With both Gadson and Rose at Hickory Ridge you can expect some big things from their sprint squad this year.