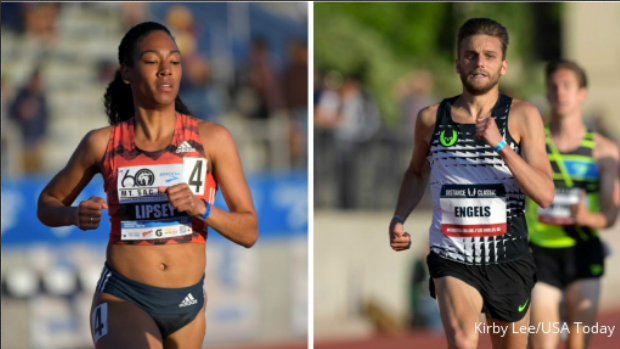 A dismal, rainy forecast didn't stop thousands of dedicated fans from traveling down to Meredith College on Friday night. Despite the potential for stormy weather, an estimated 3,500 excited fans lined up along the clay-colored Meredith track to watch some of the fastest runners in the country compete at the 2018 Sir Walter Miler.

The loaded elite mile fields did not disappoint.

Lopez Lomong, the 2018 U.S. Outdoor 10,000-meter champion, came within just .03 of beating the North Carolina state record in the men's mile, running a blazing time of 3:53.86. In the women's race, adidas' Charlene Lipsey used her powerful 800-meter speed to outkick the rest of the tightly-bunched field down the final stretch, taking home the win in 4:27.28.

The extremely competitive field placed 13 men under the four-minute barrier. Johnny Gregorek finished as the runner-up in 3:54.54 and Sam Prakel placed third with at time of 3:54.64.

As Lomong strode out to the start line before the race, he was calm but energetic, cracking a smile as he ran alongside the spectators and gave them high fives. That calmness translated over to the race, as Lomong stayed patient as the leaders went out in a fast 57 seconds for the first lap. But come bell lap, he worked up the outside to the front of the pack as fans yelled and cheered out his name.

He didn't come to Raleigh expecting to put down a fast time, so Lomong was happy that he was able to grab the win at a meet he's been hoping to attend for some time.

"I've been hearing about this meet a long time, but I'm really happy to be able to come here, the fifth annual, and come and run so fast," said Lomong. "Hopefully next time I'll be back and break it."

Next week, Lomong will compete in the 10,000-meters in Toronto at the NACAC Track and Field Championships. Looking forward to that race and beyond, Lomong believes spending some time to train for speed, including racing down in distance in the mile, will set him up for success.

"Now we've cut down the mileage and we do a lot of speed," said Lomong. "But I think it's working right now, so we'll keep it going."

On the women's side, the race came down to the final 100-meters as Lipsey barley outsprinted Sarah Vaughn to catch the win at the tape. Vaughn led for almost the entire race, going out early with pacer Jamie Morrisey and creating a decent gap on the chase pack led by Lipsey. But Lipsey's speed was too much for Vaughn at the end, even with Vaughn's diving effort across the finish in an attempt to lunge past Lipsey.

For Lipsey, it certainly wasn't easy. Coming from behind, she used the electricity from the fans along the track to her advantage.

"Thankfully, the crowd was screaming and I'm like 'I can do this, I can do this,'" said Lipsey, "It was a lot of motivation and it just pushed me to dig deep within, and thankfully I was able to come off with the win."

Lipsey is primarily an 800-meter runner, so she doesn't race the mile often. But she knows that with her 800-meter training, she can blow past her competitors to the finish as she did on Friday night.

"In my head, I'm pretty confident if I'm close enough that I have that speed that a lot of people don't have," Lipsey said.

That speed carried Lipsey to the win in an event that is special to countless people in North Carolina. Craig Engels is one of them. The North Carolina native finished sixth in the mile on Friday night. Getting a chance to compete in front of a home crowd, in a professional sport that doesn't always get much attention, is something Engels thinks is unique.

"Most of the time professional running doesn't get much of a spotlight," said Engels. "But coming home and racing in front of these people that know the sport and are cheering for me, it's pretty cool."