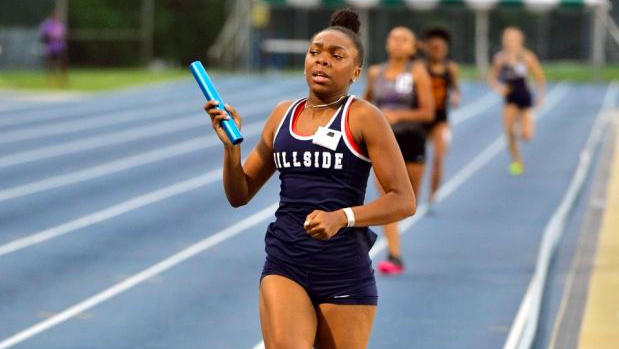 Hillside girls were the NCHSAA 4A State Champions last year where it also came down to a dramatic finish with the 4x400 being the deciding factor between the top three spots between Southeast Raleigh and High Point Central.

This year they moved down to 3A.  While returning the majority of last years team, they took a big hit with star sophomore Alysia Johnson battling injury on and off throughout the indoor and outdoor season.  Johnson did not race at regionals and it opened the door for a five team battle for the 3A crown.  Parkland, Northern Guilford, Southwest Guilford and indoor champs Cuthbertson all posed as threats.

Northern Guilford had all of their stars running well as Alyson Davis took  2nd in the 100m Dash and 6th in the 200, freshman Alyssa Hernandez taking 2nd in the 400, Olivia Bene placing 3rd in the 800 and Amaya English finished 3rd and 6th in the 100 and 300 meter hurdles.

Hillside had been strong across the board as well with star thrower Kayla Beasley breaking the 3A State Meet Record in the Shot Put at 43-7.5, while also took 4th in the Discus.  Jessica Wright and Ashlan Bowdry went 1-3 in the 300m Hurdles, Gabby Ryan won the girls High Jump in 5-2 which really came up huge for them.  Emmaya Waters also brought home points taking 6th in the 400 then 7th in the 200.

These three teams came down to 4x400.  Parkland girls did not have a relay team and held a 61 to 52 point lead over Hillside with Northern Guilford sitting in 3rd at 51 points.  Unfortunately for Parkland, Hillside and Northern Guilford were the top 2 seeds in the event.  To make things more dramatic prior to the 4x400 and to ensure everyone knew the pressure of the event, a lightening delay hit the meet just as heat 1 was really to step on the track.

The situation was if Hillside won, they'd edge Parkland by one point.  If Northern Guilford won they would tie Parkland for 1st at 61 points.  If anyone else took the win Parkland would win, and Hillside and Northern would be battling for 2nd.

After the lightening delay, roughly 40 minutes later, everyone knew what was at stake.  Alyssa Hernandez got Northern Guilford out to a big lead on the first leg, but Hillside was still in range.  Olivia Bene held the lead through the 2nd leg for Northern with Hillside and Cuthbertson in range.  Over the third leg Hillside was closing the gap on Northern and as Megan Wilkins (Northern) and Jessica Wright (Hillside) got the baton they were well ahead of the field and pretty much side by side.

The two head through the 150 meter mark side by side where it was anyones race.  But Jessica Wright made her move to put the team on her back and began to pull away from Northern.  The Hillside fans in the stands were going nuts as Wright began to power down the homestretch clear of the field as they won the event in 3:52.23 as Northern held off Southeast Guilford for 2nd in 3:56.10.

Final scores of the meet were Hillside 62, Parkland 61 and Northern Guilford 59.  These three squads were really firing on all cylinders and something minor in the meet could have swung the meet a different way.  But Hillside was able to get it done when it mattered.  There is no better ending to a state championship than the team battle coming down to the 4x400 and it was incredible to watch the back and forth battle.