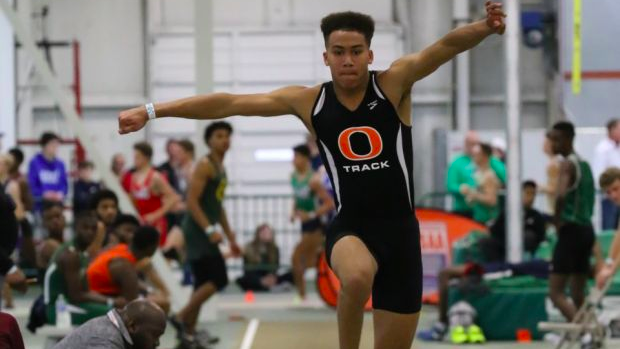 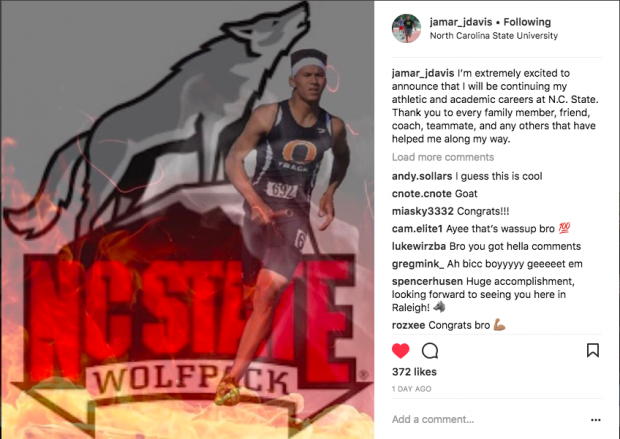 Davis has been having a stellar senior year finishing as the NCHSAA 3A Long and Triple Jump State Champion, and New Balance Indoor Nationals All-American in the Triple Jump.

Davis holds indoor PRs of 49-6 and 22-9.5, and recently won against a college field at Raleigh Relays jumping 48-9, just before announcing his college commitment.  Davis has next weeks Bojangles Classic to look forward to, where he'll jump against two of the best horizontal jumps fields in the country.  Davis answered some questions for us below about his recent commitment, and season up ahead.

NCRunners: You have just committed to jump at NC State University, how did the college recruitment process go for you and what was it about NC State's program that kept you close to home?

Davis: I really enjoyed the entire process, I only ended up going on two official visits before deciding NC State was the place I wanted to be. I decided to go to State because not only did it have a great athletic program, but I also really clicked with the team and coaching staff.

What other schools were you considering?

What was the biggest thing you were personally looking for in a college program?

The best fit, I wanted a place where I fit in academically, athletically and socially.

I was extremely excited! I went into the meet just hoping to jump well for myself, and get solid mark. I actually hit an outdoor PR, but didn't know because the measurements were in meters.

When did you get into jumping, and at what point in your career did you see this being something you could be really good in?

I started jumping in middle school, but didn't actually have any sort of coaching till my freshman year of high school. My freshman year I was introduced to triple jump, and taught basic mechanics, as well as being taught how to actually long jump. I think the moment I realized that I could do something in this sport is when I made States in triple jump my freshman year, I looked around and realized I was one of the youngest kids competing. After that year track became my main focus athletically.

You've got a big competition coming up with Bojangles Classic next weekend.  Are you excited to jump against a strong HS field and possibly clear the 50 foot barrier in Triple Jump for the first time?

I'm extremely excited! I'm hoping for PRs in both long and triple jump, I've been working slowly toward 50 and hope with a great facility, and great weather conditions that I'll PR.

How do you mentally prepare for big competitions?  Does seeing others land a big mark fuel you within competition?

Mentally, I just try to focus on myself and what I need to do. I love competition, my best meets tend to be those with others who land big marks. I love the fact that North Carolina has other great horizontal jumpers like Kevin Snyder and Eric Haddock, seeing either of them PR or land big marks always forces me into my best competition form.

What all can we expect from you during the remainder of your high school career?

I'm going to try new things, I'm experimenting with 300 Hurdles and other various events. My main goal for this season to make it as high up as I can on the All-Time list for North Carolina, and get ready for states, nationals, and eventually my Collegiate career.