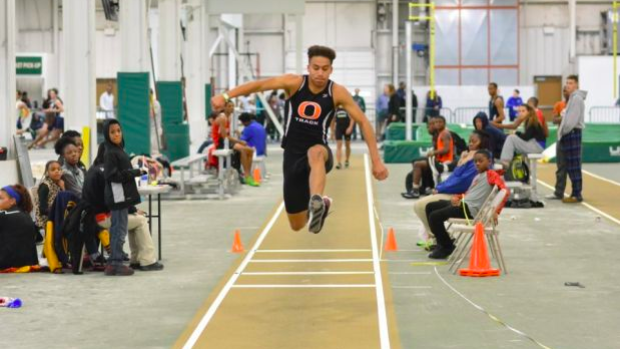 Jamar Davis (Orange) should dominate in the boys Triple Jump.  The senior has jumped 49-6 this indoor season, 5 and a half feet better than his competition.  This Long Jump should be a little closer as he's jumped 22-9.5 and Jieem Bullock (North Brunswick) and Kolby Cuthrell (Southwest Guilford) are both within striking distance of upsetting the star jumper

This will be a battle between Adam Hart (Topsail) and Asher Prince (Western Harnett), who have thrown 51-0.5 and 51-5 respectively this season.  Joshua Faison (Smithfield-Selma) will look to get into the mix as well with a PR of 49-7.25.

Riley Felts (Weddington) had a huge PR the other week jumping 12-9 with some close attempts at 13-0.  Just one year ago Tessa Sheets (Northwood) set a State Meet record at 12-7.  That should certainly go down in one of the meets this weekend, and Felts could be the girl to do it!  She would sit at NC#5 all-time indoors, but that mark came outdoors at a Polar Bear.

Ben Finger will look to capture a new 3A State meet record after jumping 15-7 last weekend at a college meet.  Finger sits at NC#9 All-Time Indoors and will look to climb that list this weekend.

Kayla Beasley (Hillside) will be the favorite here, but Kamryn Henderson (Marvin Ridge) is not far behind.  Their PRs are 44-6.25 and 42-11 respectively this indoor season.  They should certainly be in for a battle, and both over the 3A record of 41-1.25.  Hillside will also look for a big day from Jada Green, who is seeded 5th.  If she can jump up to the top 3 it would make a big difference in the team battle between Hillside and Cuthbertson.