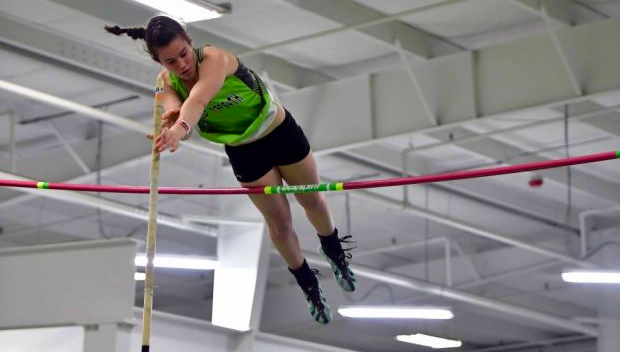 Last spring West Forsyth's Lindsay Absher showed a lot of promise in the Pole Vault.  As a sophomore Absher took home a runner-up finish both indoors and outdoors at the NCHSAA 4A State Championship with marks of 11-0 indoors and her sophomore year PR of 12-0 outdoors.

When Absher was a freshman a coach at West Forsyth saw her at gymnastics practice and told her that she could be a good pole vaulter.  Two months later Absher qualifed for the NCHSAA State Championships despite having less than two months experience in a difficult event to pick up.  She would take 10th jumping 9-6.

My high school track coach saw me at a gymnastics practice and thought I would be a good vaulter.  I gave it a try and fell in love with the sport.  I have been a competitive gymnast for 8 years.  Gymnastics gave me a great transition into pole vault.

This year Absher showed that she had been working hard in the long offseason opening the year with marks of 12-0 at her first two meets of the season.  This matched where Absher finished the end of the 2017 outdoor season.

Absher states "I have been working hard at practice and have been more consistently clearing bars between 12-13ft.  I cleared a 13ft bar in practice several times a few days before the meet, so I knew I had it in me, I just needed to vault well and clear it in a meet."

Last Thursday at the Forysth Series #3 everything finally came together for Absher.  She cleared 13-0 getting a new PR by one foot and moving up to a new NC#1, current US#5 (US#2 at the time) and tied Chesney Ward at NC#2 All-Time Indoors.

Absher just has .75 inches left to go and she'll take down Anna Eaton's state record.  Her first attempt at this will be this weekend at the Champion Fast Track HS Invitational at JDL Fast Track.

The state record will be somewhat of a speed bump for the junior.  She hopes to break the state record soon, but knows that she could far exceed the mark over the next two years.

Pole Vault on the girls side has really picked up in recent year.  Prior to 2008 only Joanna Wright had cleared 12-0.  In the 2018 season we've had four girls clear the mark with a month to go in the season.  Riley Felts (Weddington), Elise Hall (Leesville Road) and McKenna Brunick (Leesville Road) have all jumped 12-0, which is tied for NC#11 All-Time Indoors, and Maura Lane (Panther Creek) jumping 11-7.  None of the current top 10 girls in the state are seniors.

Absher will also set her sites on the outdoor state record, which is 13-5 held by Kristen Lee (Wakefield).