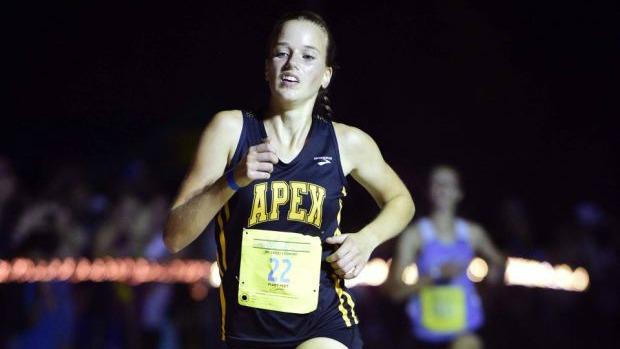 If you've read the boys meet preview and thought that was a loaded field, the girls is even more stacked.  This field brings in 12 girls that have broken 19 minutes this season including some of the states biggest stars.  Headlining the field is #2 Sarah LaTour (Cuthbertson) who will look to prove she's deserving of our #2 rankings against a ton of talented girls who have faster PRs then her.  #3 Sloan Walter (Cardinal Gibbons) and #6 Marissa Bishop (Cardinal Gibbons) will be looking to shake the rust off before heading to Trinity/Valkyrie Invitational in Louisville next weekend.  I'd imagine they'll focus on running as a pack in their first 5K of the year before going hard next weekend.  #8 Katherine Priu is not entered in the field.

Also in contention up front in this field will be #7 Calli Parlier (Apex) who has run 18:29, #10 Shannon Sefton (Panther Creek), #21 Alexis McDonnell who has proven she's going to be a top girl in 4A this fall and Sarah Parrish (Providence) who kicked off the year with a PR of 18:53.  I'd also expect #14 Sarah Bechtal (Weddington) and Madeline Hill (Cuthbertson) to contend up front in this field.  Hill will battle with Jungle Run runner up Makayla Obremski (Topsail) as the top freshman in this field after both have been stellar early in their high school careers.  I'd also expect #16 Anna-Kathryn Kilby (Forbush) to race in the championship field even though her team is entered in the Invitational Race.

#22 Lila Peters was great on the track last fall and ran 19:15 earlier this season setting a 12 second PR.  I expect her to go much faster this season, and we'll see if this is the week her breakthrough in XC comes.  Anna Petr (Mallard Creek) has been crushing it this fall in a new uniform running well in big invitationals the last two weeks.  This will certainly be her toughest test so far this season.  Emma Fredericks (Northern Guilford) impressed with her 19:07 season debut at Hagan Stone last week where she won Guilford County's.  This looks to be a test to see if she's as strong as she looked last week.  This field runs so deep individually and is going to be really telling of where every team and individual's fitness is at three weeks into the XC season.  Last year Nevada Mareno won in 18:04 with second place Sarah Taylor at 19:18, so this course doesn't typically run too fast, so place will be much more important than time.

Gibbons girls come in as a major favorite in the virtual meet, but when you factor out Priu not racing the team battle comes really close between them, Weddington and Cuthbertson.  If my prediction of Gibbons not going 100% is accurate we could see a very close team battle.  Weddington came out looking really strong at Providence two weeks ago as a team with no seniors averaged 19:19 with a 29 second spread from 1-5.  The same weekend Cuthbertson was impressive dominating at WNC.  This is a rivalry we'll have to watch all season long as two of NC's best teams will matchup many times as they are county and conference rivals.

Providence girls also exceeded expectations two weeks ago with Sarah Parrish running as a definitive #1.  They'll look to improve from #2-#5 to close the gap on the top three teams.  We also haven't gotten to see a full Cary Academy squad this year with top returner Athina Zodl not running at WNC.  She is entered this weekend so we should see their full hand this weekend.

Plenty of other squads have looked really strong coming into the season in Apex, Hoggard, Sanderson, Panther Creek, Hough and Charlotte Catholic.  All rank well within our top 25 teams on the girls side and will look to prove they belong there this weekend.  West Forsyth was the team I ranked much higher than their returning rankings as the #8 team in NC.  They lived up to the hype slightly in a 2 Mile last week against Reagan and West beating them by 9 and 20 points respectively.  This will be the Titans first major test of the season and we will see if their senior leaders and young talent can lead up to the hype we've given them, despite ranking 15th in our virtual meet.