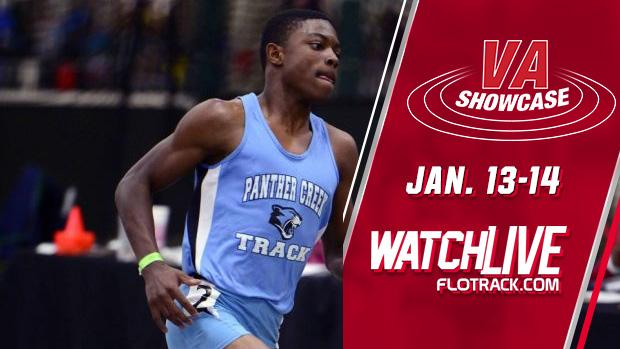 Year #1 of the VA Showcase is set to begin this Friday on Liberty University's brand new indoor track! This event will be the first of many high school races this facility will hold.  Below are the heats for the Invitational sections of the VA Showcase, North Carolina athletes are in bold font!

You can watch this event LIVE on FloTrack here ---> http://bit.ly/2iQzxnq

J Johnson (Panther Creek) has been the best 55m runner in North Carolina so far this season and has run 6.40 already this year.  He will look to prove how strong he is against a stacked 55m field where he is the 4th overall seed.  Josh Polk (Hobbton) has been very strong in the early stage of the season and comes in as the 20th seed with his 6.53 PR.  David Smith (SE Raleigh) also has a shot at the final if he is in the same form as last season.  He holds a PR of 6.55 and will look to make strides towards that this weekend.  With 276 boys, and 35 heats you'll have to certainly be on your A-game to snag a spot in the final!

Kimani Davis (Parkland) holds the top North Carolina seed with the sophomore Sierra Fletcher (SE Raleigh) having the same PR at 8.34.  They'll go up against some stiff competition from Virginia that has many teams like Western Branch and Nansemond River that always put out a large number of strong hurdlers.  Both Fletcher and Davis will be eyeing a spot to Saturday's finals and their will little room for error with such an elite hurdle field.

NC#1 Trequan Barnes (Parkland) comes in with the 6th fastest 300 seed in a stacked Invitational field.  His 34.94 mark makes him the only boys in North Carolina under 35 seconds so far this season.  He will go up against 5 athletes who are seeded at 35.00 or faster and will likely be in the second fastest section.  Josh Polk (Hobbton) and Savien Hayes (Parkland) are also slated to compete in this section and can certainly post and NC#1 mark.  Tyrese Cooper (American HS, Florida) is the top entries in this field, and even though he is only a sophomore he is likely going after the High School National Record in this event.

Kimani Davis, Zjinaiya Francis, and Gabrielle Cain (All from Parkland) and Sierra Fletcher (Southeast Raleigh) are all set to compete Friday night. Davis is the highest seed from NC in the field and will look to match her 40.5 from last indoor season.

Nathan Gamble (Leesville Road), Gable Dershem (Cleveland), Christian Pigues (Rolesville) and Davis Turner (Ashville) are all slated to race in the fast sections of the 1600 on Friday.  All four boys made the cutoff of 4:35 with Gamble having the fastest seed time of 4:27.97 of the four North Carolinian's.  Thought it doesn't seem like any will make it in the fast sections, all of the heats should be won in under 4:25.

Melissa Zammitti (Davidson Day School) is one of two girls that have PRs under 5 minutes in the field with Foot Locker South runner-up Heather Holt being the only girl in the field who have a better PR then her.  Zammitti will look for a fast indoor season debut after having an outstanding XC season and will certainly look to post the fastest mark in North Carolina so far this year.

Kenya Livingston (Rocky River) was one of the best in the nation last season with a jump of 5-10 as a sophomore and will look to grab a major win this Friday.  Livingston opened the season with a 5-8 mark and is the current state leader and is tied for US#2.  She will be joined by Sarah Timberlake (West Forsyth), Saidah Hardwick (SE Raleigh) and Diamond Lyerly (Parkland).  Timberlake has started off this season matching her PR from last outdoor season of 5-6 and is the #3 seed in this strong field.

Jayhlen Washington (North Brunswick) enters as the top seed in this triple jump field, but will have some stiff competition on Friday. Washington holds a PR of 48-5 and two other boys int he field, Garry Williams (Western Branch, Virginia) and Hasani Knight (Landstown HS, Virginia), have jumped over 48 ft in their high school careers.

Aaron Wilkerson (Southern Guilford) is currently NC#2 with a throw of 56-1 this season.  Wilkerson's best throw last season was 55-0.5 showing he is already in better form than he was all of last season.  He will go up against a strong field including Seth Harrell (Grassfield, Virginia) who sits at US#7 with his 59-4.75 from earlier this season.