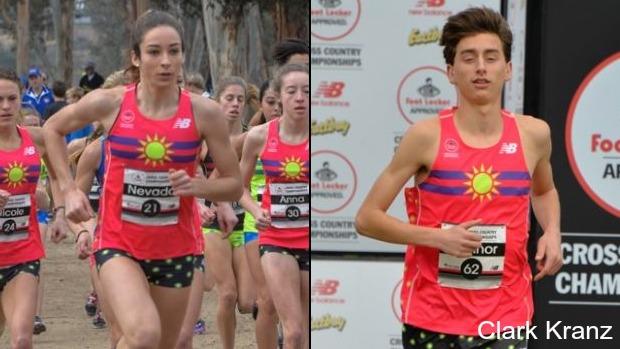 Nevada Mareno and Claudia Lane (Malibu, CA) found themselves as the two favorites heading into Foot Locker Nationals yesterday afternoon.  Mareno was the top returner after placing 3rd last season.  Lane is in her first year of running and was looking to cap off a drastic break out cross country season.  40 girls toed the line and it was the sophomore Lane who went to the front of the pack.  Mareno has worked on pacing herself throughout the season and went out conservatively in the first mile.  Lane went through in the lead in 5:15 and Mareno sat back in fourth hitting the mile mark in about 5:24.

After a conservative first mile Mareno knew she had to make up some distance on Lane as she could not hang too far back from her.  Over the second mile Mareno moved up into second place and began to gain ground on Lane.  Mareno eventually sat right on Lane's shoulder and looked to be just waiting to make her final move.  But Lane was able to put a little bit of distance on Mareno, but she was still in striking range.  But once the finish line was in sight Lane unleashed a surprising kick and was able to pull away from Mareno.  Mareno took 2nd running 17:08 on a very challenging Balboa Park course.  Mareno's time is the fastest time ever from a North Carolina girl at Foot Locker Nationals and her 2nd place finish matches Ryen Frazier as North Carolina's best overall finisher at Foot Locker Nationals!

Also in the girls race was Sara Platek who posted a very impressive 22nd place finish to cap off an excellent cross country career.  Platek ranks as the 13th NC girl all-time at Foot Locker Nationals with her performance yesterday.

Connor Lane was in a boys race that was truly wide open in terms of who was going to win and also place in the top 15 to earn an All-American position.  The race was underway and Lane got out well and sat towards the front as everyone began to settle in and the pace started off surprisingly slow.  Seth Hirsch began to push the pace as it was way too slow for his liking.  Lane still remained in the front pack as the whole group of 40 was all within a few seconds of each other.  They went through the mile at around 4:46 with Lane sitting at the front of the chase pack in 4th place overall.

Over the second mile the group began to stretch out a tad as some boys began to fall off the early pace.  Lane remained at the front and was not going to lose his positioning that he had fought for early on.  Through the 2 mile Lane has remained in 4th place and a group of 5 boys started to establish themselves ahead of the rest.  Lane sat at the back of that group, and was certainly in position to take the lead if he wanted.  The second time up the hill is when Lane began to fall back from the lead group as three boys, Finn Gessner, Reed Brown and Hirsch pulled away from the field.  With a fast downhill the chase group reeled in Lane very quickly as he was fighting to hold onto his top 5 spot.

At the front it looked like the Midwest duo of Gessner that were going to pull ahead.  But Brown, who was 4th at the Texas State Meet this season, ran an excellent downhill and unleashed a strong kick to become the Foot Locker National Champion!  Gessner held off Hirsch for 2nd place.  A few boys caught up to Lane over the final stretch and he ended up running 15:13 to take 8th!  Only 4 boys in North Carolina history have had better marks at Foot Locker Nationals than Lane's performance yesterday, Matt DeBole (5th, 2002), Milos Mitric (6th, 2001), Jake Hurysz (6th, 2009) and Jack Bolas (6th, 2009).  Lane's 8th place finish ranks him 5th in the state all-time!   His time of 15:13 is 4th all-time from an NC athlete at Foot Locker Nationals and the 3rd best mark at Balboa Park from a North Carolina athlete!

Huge congrats goes out to Platek, Lane and Mareno on representing North Caroilna well on the West Coast, can't wait to see you all run on the track!