Two years into its existence, Friday Night Lights has already become a major player on the North Carolina cross country schedule!  Several teams have chosen this meet as their major race debut for 2016, and the meet drew a total of 51 teams and had over 1600 runners entered.  The combination of good competition, the chance to race on the NCHSAA state meet course, and the "under the lights" atmosphere (complete with fireworks at the conclusion of the meet) has made FNL the biggest draw on a weekend that has normally featured several mid-sized meets. Kudos to the Mount Tabor coaches, parents, and athletes for running a great event and quickly building this invitational into a major meet.

At the culmination of a hot and humid week, you can bet the runners who flocked to Ivey Redmon Sports Complex were grateful to run after 6 PM.  As the sun went down throughout the meet, the temperatures at least became tolerable, although the Kernersville EMS was on hand in force to help with anyone who succumbed to the heat.  Despite the warm conditions, there were many noteworthy performances throughout the evening, so let's dig into the varsity competitions and then take a look at combined individual and team results from all 6 races combined together! 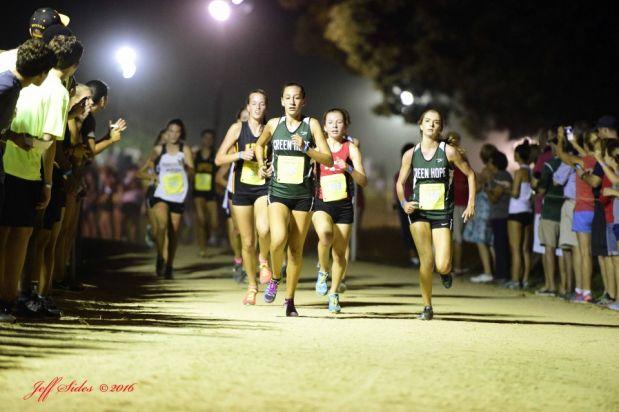 Green Hope's girls program is a little smaller in total numbers than it has been in the past, and the Falcons lost the 2015 4A state championship after winning 6 straight.  If anyone thought those were signs of an impending decline, well, think again.  Green Hope started the race strong, with their top 5 in the top 10 by the mid point, and then they just got stronger as the race went on. At the finish they held places 2 through 6, with a top 5 split of only 17 seconds!  That's enough to move the Falcons into 2nd in the statewide team rankings for the season, and it earned them a dominating 20 - 119 win over Broughton.  Sarah Taylor led the Green Hope charge with a time of 19:18.20, and all 7 of the Falcons who ran in this race improved over their Providence Invitational times.  It's worth noting that they ran without Emily Jordan in this race, and she most likely would have bridged the gap between the Falcons' 5th and 6th runners last night, making them even stronger. 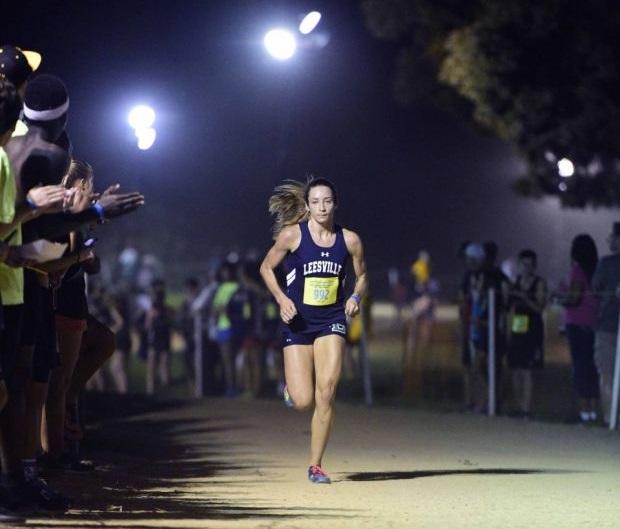 Individually, however, there was no question who would win this race.  Nevada Mareno (Leesville Road) is the top returning runner in the nation and finished 3rd at Foot Locker Nationals last fall.  The senior was untouched for nearly the entire race, leading by over a minute for the second half.  Her final time of 18:04.39 was significantly slower than last year, but then again she was pushed through most of the 2015 race by Sara Platek (and the weather was noticeable warmer and more humid this year, too).  Mareno looked strong and efficient throughout the race, and it seems likely that she has a lot more to show this season.  See what she had to say about the race below.

All Race Video and Interview from Friday Night Lights 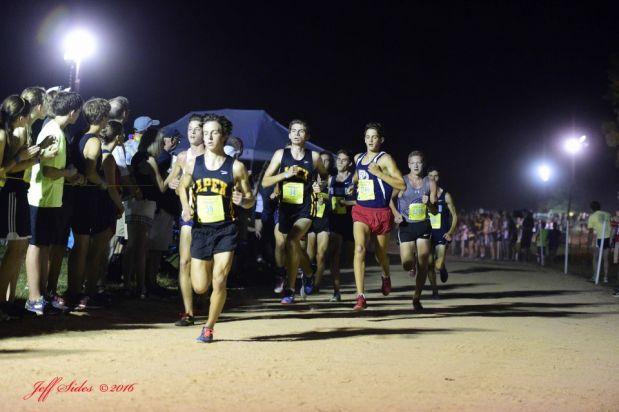 The big statement in the boys' top varsity race wasn't made by a team; rather, it was made by defending champion Ben Savino (Apex).  Coming into the meet we tabbed David Melville (Northern Guilford) as the favorite based on his strong 2015-2016 school year as a whole, but Savino wasn't having any of that.  He was in the front of the lead pack by the mile mark and stayed there, eventually pulling away from Melville to win by 8 seconds, lowering his meet record to 15:51.73.  Teammate David Cart finished 3rd in 16:01.16, signaling that the Apex junior is going to be a runner to watch this season. 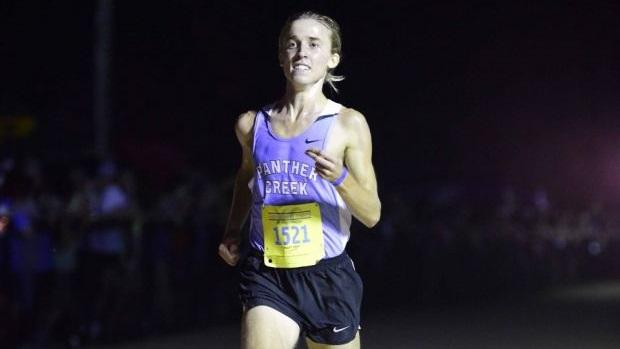 With a few of the top teams not at full strength (and the Green Hope boys sitting out the championship race entirely), the scoring was a bit muddled.  Led by a 9th-place finish from Kyle Fawzi, Panther Creek emerged from the race with a confidence-boosting team win, 94-116 over Broughton.  See what Savino had to say about his race below!

All Video and Interview from Friday Night Lights

This race was ruled by packs, although the individual winner was all by herself at the end.  Caitlin Burkett (Franklin Academy) was able to pull away from a three-girl group of Charlotte Latin runners to take the win in 20:08.01, which would have placed her in the top 16 of the championship race.  Latin went 2-3-4, but their next runner was in 64th place, and that relegated the Hawks to a tie for second place in the team scores with Northwest Cabarrus, who won the tiebreaker with a stronger 6th runner.  It was the Marvin Ridge lead pack that won the race, as the Mavericks placed 5 in the top 12 to score 41 points.  To see how Marvin Ridge compared to the top teams from the championship race, check out the combined results on the third slide!

Individually, this race was over not long after it started, as Voyager Academy's Luke Bennett separated quickly and kept pulling away for a 45-second margin of victory, the second-biggest of the night behind Mareno's domination in the championship girls race.  Bennett's 16:35.36 would have placed him just outside the top 10 in the championship race, and we can't wait to see him in the same race with some of the big guns in the state!  As was the case with the Invitational Girls, Marvin Ridge win in team scoring with strong pack running, going 2-3-4 to hold off Green Hope's second seven 64-70.

All Friday Night Lights Races Together: