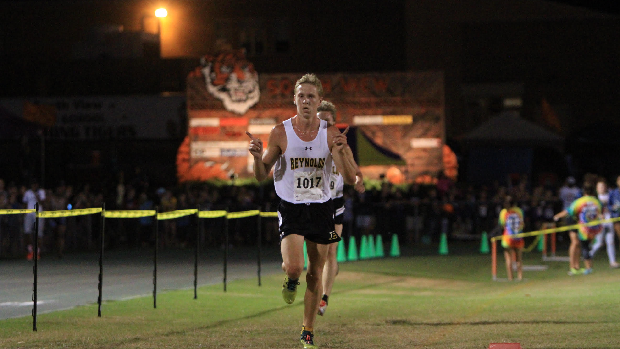 The Jungle Run was a tremendous atmosphere will over 50 teams in attendance racing under the lights!  South View did a tremendous job getting the course prepared and lights up early Saturday morning to accommodate Tropical Storm Hermine.  It is certainly a meet I think everyone should go to at least once in their high school careers, and I certainly look forward to going back next season.

The race was taken out hard by Jarred Komyati (Panther Creek), but the rest of the field didn't panic and slowly were able to reel him back in over the beginning stages of the race.  Todd Holbrook and John Tatter (R.J Reynolds) took control of the chase pack.  As the race got to around the halfway mark the Reynolds duo had began to pull away and were racing each other for the win.  A second group emerged as well that contained Jamie Witmer (Hoggard), Gavin Kinkead (Holly Springs), Austin Carroll (Corinth Holders) and Chad Campbell (Topsail).  Trailing that group was Jonathan Timothy (JH Rose) and Ben Verchick (Union Pines).  Holbrook was able to pull away from Tatter as the emerged to the track, and almost celebrated a little too early down the homestreak.  But was able to hold off his teammate as they ran 15:32 and 15:33 respectively.

Jamie Witmer was able to pull away from that second group over the last mile to run 15:53 and running over 30 seconds faster than his previous PR.   Carroll trailed in 4th also with a huge PR of 16:01.  Carroll is in the 3A East Region that is loaded with strong individuals, and he proves he will be at the top of his region this season.  Kinkead has not run much if at all the last two weeks due to a sickness going through the team at Holly Springs, but you wouldn't be able to tell!  He took 5th running 16:08. The Sophomore Verchick made up some ground running 16:12 to take 6th place.

In the team battle it was RJ Reynolds taking down Chapel Hill with a score of 67 to 78.  Chapel Hill put 5 in front of Reynolds #3, but going 1-2-10 was took much for the Tigers to handle.  Chapel Hill has an incredible lead pack of 7 that will be tough force for 3A this November.  RJ Reynolds has looked to have filled their needs of a solid 3-5.  Thomas Anthony has come out of the summer really strong and is a huge part of their early season success. Holly Springs was not too far behind in third.  They haven't been at full strength due to a virus going through their team.  Their coach said a lot of them haven't trained much the last two weeks, so I take this as a strong showing from them.