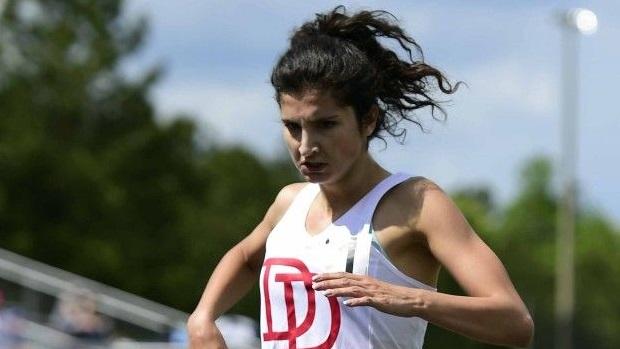 The smallest schools in North Carolina somehow always manage to produce some big talent.  When the NCISAA 1A/2A classification gathered in Raleigh this past weekend for their state championship, the competition level was much greater than you would ever expect from a group of schools that would almost all be in the bottom half of the 1A public schools based on enrollment.  Check out the two recaps below to see the highlights from the two days of competition!

Melissa Zammitti (Davidson Day) was unbeatable this weekend.  She returned to the NCISAA this year after two years at Lake Norman High, and she won all three distance races to close out a remarkable junior year.  Zammitti won the 3200 on Friday night in 11:01.50 after a duel with Jennifer Stephenson (Village Christian).  Zammitti was dominant on Saturday, taking the 1600 in 5:13.47 (winning by 8 seconds), then wrapped up with a 2:22.74 in the 800 (winning by 3 seconds).

Gracie Miller (Burlington Christian) won her third consecutive long jump championship with a mark of 16' 3.5".  She fell just short of a double win, losing the triple jump to Zhateya Jones (Northside Christian) by 1.25 inches despite posting a season best 34' 1". Halei Gillis led a 1-2-3 sweep in the discus throw by Carolina Day, dominating the field by throwing 120' 9" and winning by 10 feet.  Gillis finished 2nd in the shot put to teammate Mikayla Ray.

The balance of this classification was on display through the rest of the meet: no school won more than one relay, and no athlete claimed first place in more than one field event. Largely as a result of the two performances above, Victory Christian scored a narrow team win over Westchester Country Day, 101-99.