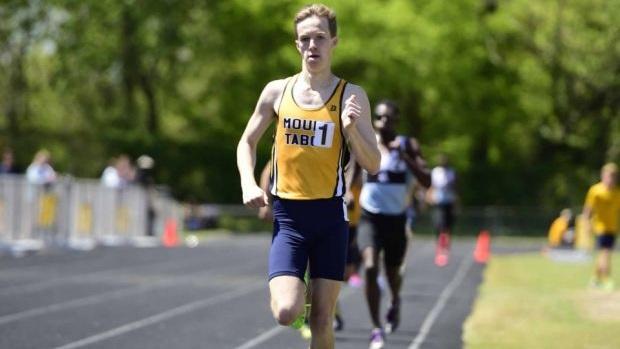 Kenny Kneisel rocketed to NC #8 All-Time in the Raleigh Relays 3200 earlier this season. Can he get another All-Time Top-10 performance in the Mile this weekend?

This is a slow weekend for North Carolina track & field, as teams concentrate on conference championship meets (which are mostly on weekdays this week or next).  However, there is one special meet this weekend, one that has become something of a North Carolina tradition despite the long distance to travel: The Penn Relay Carnival.  This is the 122nd consecutive running of the most historic meet in the country, and for the last decade or more North Carolina athletes have been participating regularly.  (I'm proud of the fact that my RJ Reynolds teams were among the first to make this a regular part of our season, although I must give credit to former Mount Tabor coach Mike Esposito for giving me the idea in the first place.)

Some of the events at The Penn Relays are very selective,especially the individual distance races.  North Carolina is well-represented in these events, with Elly Henes (Green Hope) and Kenny Kneisel (Mount Tabor) in the mile, not to mention three guys making the trip for the 3000: Connor Lane (Cardinal Gibbons), David Melville (Northern Guilford), and Jack Cawley (Middle Creek).  The Old North State will also have 4 athletes in the 400 Hurdles, led by Anna Cockrell (Providence Day), who finished 3rd last year.

It's also quite hard to get into the 4x800 and the Distance Medley at this meet, but despite their selective nature Green Hope and Mount Tabor will still compete in the boys' race, while Mount Tabor made it into the girls' field as well.  The meet accepts any 4x100 team and has fairly relaxed standards in the 4x400, but this year it seems that few schools have chosen to bring larger groups to the meet.  The travel is tough, but the experience is incredible, and I highly recommend it!

You can see North Carolina's recent history at Franklin Field here, and check out our state's entries in this year's meet below!