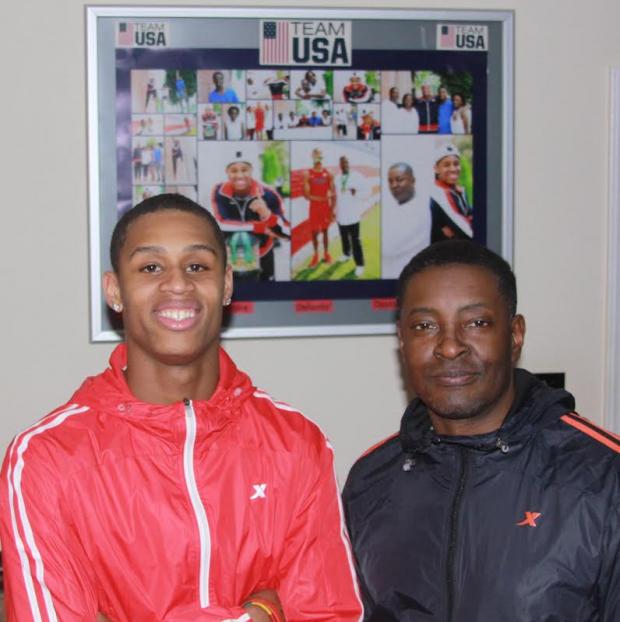 The former Cherryville star and HS national record holder in the 100 meters, signed a 4-year deal with Xtep and will return to training with Coach Valentino Sykes, high coach during his high school career.

Former Cherryville star sprinter Trentavis Friday has decided to forego his remaining college eligibility and turn pro, effective immediately.  The 100m national record-holder signed a 4-year deal with Xtep, a Chinese shoe manufacturer, on Monday.  That means Friday will walk away from his scholarship at Florida State, instead choosing to return to training with Valentino Sykes, the club coach who orchestrated his high school success.

According to Coach Sykes, Friday will be an ambassador for Xtep in the sport of track & field, and he will have a hand in designing his own uniforms and spikes.  The deal has an option for a 5th year, and it will allow Friday plenty of time to develop on the international stage.  Sykes also indicated that the plan is for Trentavis to debut in January.

Reached by phone today, Friday said that he was in good academic standing at Florida State, but he left school to focus on this deal.  "It took a little bit longer than expected to get it done, but I want to dispel the rumor going around that I flunked out.  I have a 3.3 GPA, and I will definitely go back to school in the future and complete my degree."  Friday indicated that he will not return to Florida State, though, instead choosing another school yet to be determined for his remaining studies.

Trent and his coach talked a bit about they way this deal happened and where they see things heading in the future:

What made you decide that this was the time to leave Florida State and turn pro?

The system that I was in just wasn't working for me.  My senior year [in high school] was the best year that I ever had, coming up from injury as a freshman and sophomore to doing something great.  When the opportunity came up for me to get back with my coach, I just thought it was perfect for me.

How did you settle on Xtep as the company that you wanted to join?

There were a few companies that expressed interest in signing me. Xtep offered more opportunities, making me the spokesperson for their company and letting me get back to Coach Sykes.  The other companies wanted me to work with one of their paid coaches, and I felt that wasn't going to work out as well for me.

[Coach Sykes: They give him a lot more freedom to guide his career as he wants...and opportunity as a whole to grow his brand with the company.]

You signed a 4-year deal, so you have time to develop as an athlete.  Is there anything on the immediate horizon that you've set as a goal?

Of course it's an Olympic year, but this first year I just want to get my confidence back up.  Indoor we'll run a few meets but nothing much, and just see where things go for there.

[Coach Sykes: I think we really just want to focus on making Team USA and getting in the relay pool.]

Friday also indicated that he is excited about being an ambassador for the sport, reaching out to young people to try to get them motivated and inspired.  He looks forward to traveling around the world, and he is also pumped about the chance to design his own gear.

Friday rocked the track & field world when he clocked a wind-legal 10.00 in the semifinals of the World Junior Championships in July of 2014, setting the national high school record, before he false-started in the finals.  He bounced back to win the 200 title at that meet, and also claimed three New Balance national titles during his senior year.

From False Start to Golden Ending: The Meteoric Rise of Trentavis Friday 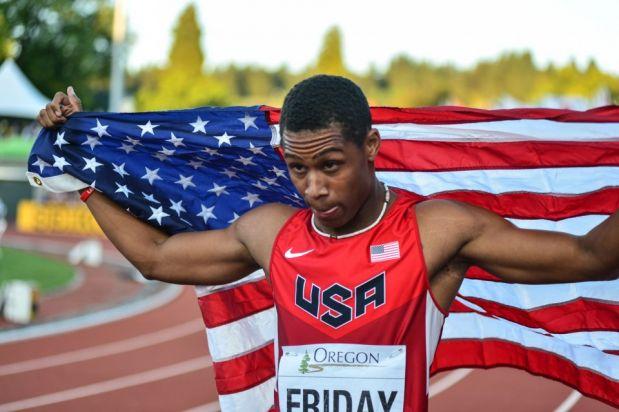