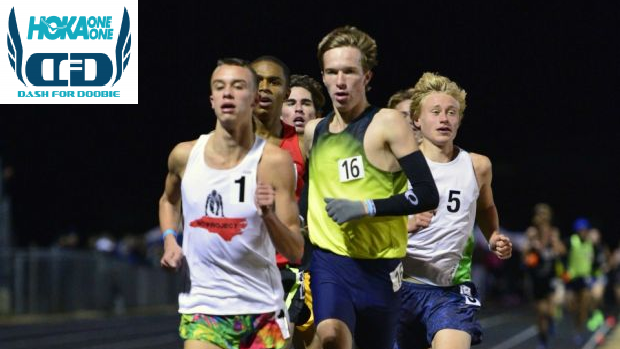 The Dash for Doobie is back and newly minted as one of four national sites that are a part of the Hoka One One Postal Nationals!  The Dash for Doobie, originally Reagan 3200 Tune-up until 2012, started in 2008 with a mere 24 boys on the start line.  Through many years of hard work and recruiting athletes to come to the event by former Reagan coach Chris Catton, the event has become a tradition for teams to attend at the end of each season.  The field has grown vastly every year with 346 athletes set to compete this year.  Below we have a table with the progression of the meet since 2008.

In 2012 the meet officially became The Dash for Doobie, in honor of Reagan distance runner Nicholas Doub. Doub passed away in a single car accident in 2011 where his car hit a patch of ice which shot his car off of the road into a tree right down the road from the school.  Doub, whose teammates coined him the nickname Doobie, was not a superstar of the team, but was one of the best teammates and friend one could ask for.  A yearly scholarship is awarded to a Reagan student who has successfully overcome great obstacles in their life. The entry fees for the Dash for Doobie are the primary means of financial support for this scholarship.

A new addiction to this years meet will be a polar bear meet to kick off the indoor track season, and also will allow  runners to represent their school and also can qualify them for the NCHSAA Indoor State Meet.  Hoka One One runner Kyle Merber, part of the world record setting Team USA DMR at World Relays, will be in attendance.  Rhodes Race Timing will also be providing live results for the meet.  We will get to see 29 of the top 50 boys and 20 of the top 50 girls (based on 5000 rankings from 2015) line up and try to drop a fast 3200 time under the lights. 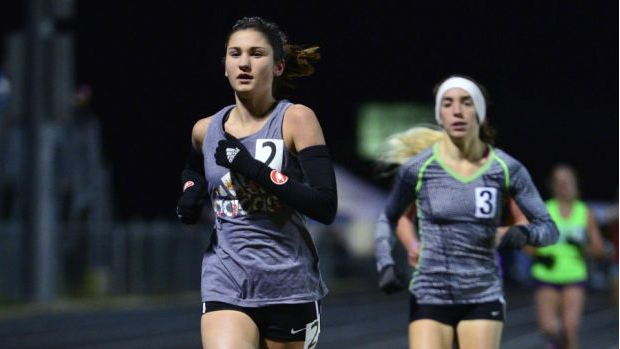 Nevada Morano (Leesville Road) has never run a 3200 before!  Last year Ryen Frazier looked to threaten the 10 minute barrier, but in windy conditions ran 10:12.  I'd expect Morano's goals are the same based off the times and dominating performances she's had this season.  In case anyone's forgotten she's run 4:43 for the full mile last indoor season. Top returner Elly Henes (Green Hope) comes in as the runner up at the 4A State Meet and holds the top PR in the field of 10:32.  She is also the reigning indoor and outdoor 3200 state champion.  Blair Ramsey (Grimsley) finished third right behind Henes last year.  She's really proved herself on the track the past three years, so look for her to contend up front.  Brittany Stanley (Mount Pleasant) comes back from an unfortunate fall at the NCHSAA 2A state meet as she looks to bounce back from an upsetting day.  Sarah Bodmer (Cary Academy) is someone to look out for.  She dominated a good field at NCISAA 3A states and is someone who has flown under the radar this season.  Emily Pettis (Leesville Road) has had a stellar season, finished 13th at the state meet despite having an early fall.  She should be under the 11 minute barrier. Teammates Marissa Bishop and Sophie Ebihara (Cardinal Gibbons) should be mixing it up in the front.  Bishop had a huge race finishing 3rd at states leading her team to a state title so should be heading into the race with huge confidence. Ebihara has been a force in the past over 3200 winning multiple state titles in the event.  Shes battled injury all season, so we hope to see her healthy this weekend.

Cardinal Gibbons 4A runner-up and current NC #1 Connor Lane headlines the field.  He is capping off a break out season and currently holds a PR of 9:35, you can expect that to get demolished this weekend.  We then have the top 4 runners from the 3A State meet David Melville (Northern Guilford), Mitchell Resor (Weddington), Alex Cornwell (Hickory Ridge), and Matt Conner Weddington). We thought Melville had a great start to the season, but every race he has gotten better and better.  He should be coming into the race with great confidence after being able to pull away from tough competition at the state meet. Resor and Conner have both thrown down strong 3200s last track season, and Conner being the reigning 3A 3200 state champion will look to prove that this is his distance.  We cannot forget about Kenny Kneisel (Mount Tabor) who is the top returner amongst this field after his fourth place finish last year.  He holds the best track PRs in this field as well with a 4:15 1600 and a 9:09 3200.  He finished third at the 4A State Meet, but has regrets of not challenging Brown and Lane as they broke away from the field.  I don't expect him to give anyone a chance to pull away from the field without a fight.  NCISAA 3A top 2 finishers Coleman Mitchell (Cary Academy) and Miller Meares (NRCA) also highlight this field.  Mitchell was 45th here last year, but has grown and improved drastically since and isn't afraid to put himself into the mix.  As we saw at the 4A state meet teammates Ben Savino & Derek Duin (Apex) are not afraid to get out front early on in the race.  I'd expect both to be out front and push the pace early.  This race normally is close to the 9 minute mark, and with only one runner under 9:10 it's going to but a lot of guys out of their comfort zone.  One thing is for sure, there is going to be a ton of PRs.