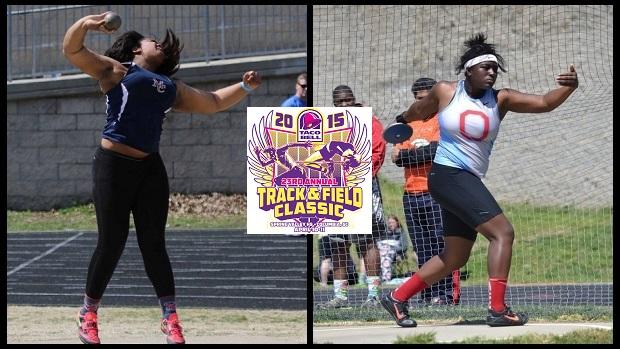 Alycia Springs and Khayla Dawson hold the top two seeds in both of the girls throws, just two of a host of NC athletes seeded well in the meet.

The Taco Bell Classic has traditionally been the biggest and most competitive regular-season invitational in the Carolinas, and this year is looking like one of the strongest editions ever. A big part of the meet's star power and depth is due to a talented contingent of athletes from the Old North State that are crossing over our southern border in search of gold medals. Although there are athletes from Georgia, Tennessee, Florida, Virginia, D.C., Maryland, Kentucky, and (of course) the lesser of the two Carolinas, there is a very good chance that our state's athletes will rule the weekend overall (and we'll publish state-vs-state scoring on Sunday to see if this prediction comes true!).

This southern incursion isn't just about gold medals and bragging rights, either. That's because it could be the first battle in a developing border war with our neighbors to the South, which we hope will lead to big competitions (and big performances) over the next several years. After this weekend, the next engagement is in June, when SCRunners and NCRunners join forces for the Border Clash 1600 and 800 races during the NCRunners Elite Tune-Up. If the interest level is high and the performances are strong, we hope to expand the idea into full-fledged Border War cross country and track meets in the future!

One other thing to look forward to: all the power-event athletes that have been waiting for some HEAT will finally get it! Expect some explosive performances in the sprints, hurdles, and field events, although it could be hard for some of the distance runners to acclimate. Check out the events where North Carolina has the best chance of dominating this weekend, and browse through the rest of our coverage for the biggest track meet in the Carolinas!

North Carolina has the top two throwers in the meet, who also happen to be the top two in the entire Southeast region in the shot put. Alycia Springs (Mallard Creek) has thrown over 47 feet this spring, and Khayla Dawson (Olympic) did the same indoors. They will have to overcome a 45-foot thrower in Carisma Holland (Seneca, SC) if they want the gold and the silver, though. Springs has also thrown the discus over 150 feet and Dawson over 142 this spring, giving them the top 2 spots coming into that event, as well. On the one hand, they are big favorites with the next-best seeds in the mid-120's; on the other hand, the discus can be pretty unpredictable at times. Still, there's a good chance these two can bring home 36 points for North Carolina when all is said and done.

Let's face it, nobody is going to beat Candace Hill if she's on her game - the Rockdale County (GA) sophomore has run 11.30 already this year! But with Dream 100 qualifier Sydnei Murphy (Apex), Tamara Clark (High Point Central), Gabrielle Cunningham (Mallard Creek), and Charla Ward (Ragsdale) all holding the top seeds in their prelim heats, NC could rack up big points in the final. Clark also has a great shot of scoring well in the 200 after running 24.46 NC #1 SE #27 last weekend. Of course, Murphy is also a favorite in the long and triple jumps, although she faces another upper-19 jumper in the former and a pair of 38-footers in the latter. If she comes out of those with 20 points plus whatever she scores in the 100, she'll be a candidate for an individual award for sure. Don't be surprised if Mallard Creek and High Point Central crash the scoring in the 4x100, even though they were dubiously left out of the fast section.

Julia Brown (Cary) is NC #1 in this event, and she has the best current time of anyone in the race. Malia Ellington (Community School of Davidson) has the top PR, and NC athletes occupy 6 of the top 8 seeds (and 7 of the top 10). The Tar Heel State also has strong competitors in the mile, led by Brooke Turner (Tuscola). Ellington is in the 3200 as well, along with Watauga's Kathleen Mansure and others, but that race has the strongest concentration of non-NC talent among the three girls' distance events. Brown will also help Cary's girls take on a strong field of 4x800 teams, supported by North Carolina powers like Green Hope, A.C. Reynolds, and Providence.

Of course, whenever Anna Cockrell (Providence Day) is on the track, she's a threat to earn 10 points. Her wind-aided time of 13.42 is US #2 & SE #1 right now, but it won't be a walk in the park for her with Chinyere Njoku (Fayette County GA) in the race. North Carolina is super deep in the girls' hurdles this year, and with Cunningham and several other strong runners in the event our state should have multiple finalists. Cockrell is also entered in the 400 Hurdles, as is Lakeisha Warner (Cary), whose 800 prowess is a huge help in this event (the two training patterns are very similar). They will have their hands full with Kelsey Heyward (J.L. Mann). Kylie Polsgrove (Avery) could be a sleeper in the hurdle races, too.

It's a good thing the Florida high jumpers didn't come up for the meet - those girls occupy 13 of the top 14 spots in the Southeast rankings. Instead, there's a logjam at the top of the seedings, with several 5' 6" jumpers all having a strong chance to win. North Carolina has 4 that have been over that height, although only Kenya Livingston (Rocky River) and Kayla Nesbit-McEwen (High Point Central) have cleared it during the current outdoor season. With Kylie Polsgrove (Avery) and Rachel Breasseale (Union Pines) also in the field, both of them consistent 5' 6" jumpers in the past, NC could conceivably sweep the top 4 places. Meanwhile, Anna Eaton (Apex) and Chesney Ward (Ragsdale), among others, will go toe-to-toe with several 12+ vaulters.

Just kidding! Ryan Clark (Banneker GA) and Darryl Haraway (DeMatha DC) are going to tear it up in these races, and it will be fun to watch. Cravont Charleston (Mallard Creek) is getting his trial by fire in the 100, and we'll find out if that 10.57 at Marvin Ridge was legit. Same for Brent Carroll (Harding) and Isaac Johnson (Providence Day) in the 110 Hurdles, as they face three of the top boys in the Southeast, all of them at 14.21 or faster this season. In the 400, Kaylan Love-Soles (Rocky River) will have a prime chance to go under 48, as he faces two low-48 runners from Georgia. Corey Thompson (East Gaston) and Carroll will also take on the 400 Hurdles, which is as much a race against the difficulty of the event as it is against any competitors. Mallard Creek and Rocky River will wade into a very competitive 4x100 with Banneker, DeMatha, and Southwest DeKalb - all teams in the upper 41's.

North Carolina holds 3 of the top 4 spots coming into the race, with only St. Pius X (KY) breaking up the trio of Lake Norman, Weddington, and Cardinal Gibbons (plus Apex makes it 4 of the top 6 seeds). In the individual distance races, Connor Peeples (Cardinal Gibbons) is the top seed in the 800, and he won't be alone; Henry Pehr (Green Hope) will also be a contender. The mile is LOADED with talent from Kentucky, Virginia, Georgia, and South Carolina, but Blanton Gillespie (Shelby) and Josh Mitchell (Cary Academy) will try to break up that cartel and get some points. Matthew Conner (Weddington) and Zachary Marchinko (Carson) will try to tag along with Logan Poteet (Kell GA), who is under 9 minutes already this season.

Vaulters from the Old North State occupy a whopping 9 of the top 12 positions on the heat sheet for this event, led by Apex teammates Drew Pedersen and Michael Utecht (who have both cleared 15' 6" NC #1 SE #5 this spring). If any of our state's 15-footers that are also entered can have a good day, it could mean big points for North Carolina. Keon Howe is the top high jumper in the Southeast, and Mallard Creek teammate Steve Fossi-Noue ranks 5th - if they both jump well, a 1-2 finish is not out of the question. Fossi-Noue is also well-seeded in the triple jump, but there are 3 guys at 46' 8" or better ahead of him and Noah Tyson (Asheville) in the seeding. The long jump lacks a dominating star but does have a ton of solid jumpers, so Tevin Quick (Ragsdale) will have to be on his game if he wants to medal. Marcus Abraham (Victory Christian) is NC's best shot in the throws, but he has his hands full with top seeds at 63' in the shot put and 179' in the discus.