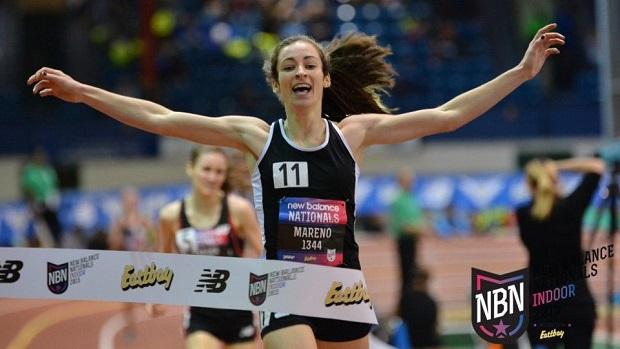 What more can North Carolina's athletes do? On the heels of indoor national championships by Isaiah Moore and Trentavis Cherry last March, the Old North State will be bringing home 3 more titles this year, not to mention a bunch of new state records and even more All-Americans. New Balance Nationals Indoor was a roaring success for our boys and girls, who seem to become more at home in the Armory in New York City every year. When you consider that two of this year's three champions will return next year, it feels like this run of excellence has a good chance of continuing. Let's break down the biggest highlights, and then check out all the performances at the bottom!

North Carolina is a Distance Power

Everyone knew coming into this meet that Ryen Frazier would be in contention in every race she ran. After all, she was the runner-up at Foot Locker Nationals, and she led the nation in the mile all winter, even moving onto the US Top 10 All-Time list. Frazier started the weekend off with an incredible duel against the same girl that had defeated her in San Diego, Anna Rohrer. Time and again Ryen challenged, and time and again Rohrer responded, until the cross country national champ was able to pull away by just a few seconds. Rohrer had to run a national record to beat Frazier, and the Ravenscroft senior's time of 16:12.81 falls at US #3 All-Time. It is also a North Carolina All-Time Record, giving Ryen two of the three (cross country and indoor, her sister Wesley still owns the outdoor 5K record). 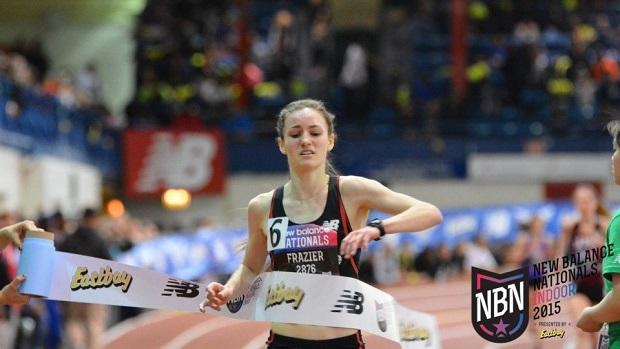 That incredible effort had to take a lot out of Frazier; fortunately, she had Saturday off to recover, then came back for two races Sunday. First was the 2 Mile, and Ryen looked unaffected by her 5K as she steadily pulled away to earn her second national championship (she won the mile last June in Greensboro). Her time of 10:02.86 moves her up to US #5 All-Time and set her fourth North Carolina All-Time Record, and it was only 5 seconds shy of Wesley's outdoor record at the same distance.

Finally, the mile came around - Ryen's favorite event, it seems, but also a short turn-around from the 2-Mile in the curious NBNI schedule that compresses three distance races into Sunday's schedule. The race devolved into a 3-girl breakaway, with Stephanie Jenks leading early, followed closely by Frazier and Nevada Mareno. Jenks fell off the pace late, leaving the two NC girls to duke it out, and in the end it was Mareno out-kicking Frazier on the final lap to take the win. Nevada ran 4:43.23, rocketing all the way up to NC #2 All-Time, while Ryen had to fight off a late charge from Danielle Jones to finish second. Mareno is a sophomore, and the scary thing is that she probably has not reached her full potential yet. North Carolina now has 9 indoor and outdoor national titles in the girls' distance races over the last 3 years, although (to be fair) 8 of those belong to girls named Frazier.

It wasn't just the girls putting up big times, either - Philip Hall (South View) ran 9:06.90 in the 2 Mile, moving him up to NC #5 All-Time as well as US #7 this season, although he missed out on All-American status by 1 place.

Skip to the bottom to see all the distance performances by NC athletes at NBNI!

Anna Cockrell was saving something after all. The Providence Day junior tied the North Carolina All-Time Record with an 8.35 in the prelims, then broke it by running 8.32 in the semifinals. That was all a prelude, however, to her showdown with national leader Sydney McLaughlin in the final. Though Cockrell did not come away with the win, she did rise to the occasion, dropping a stunning 8.21 that crushed the old state record and also makes her the 5th-fastest performer in US history in that event. The meet had an FAT camera set up at the 55 mark, and her time of 7.64 is also a North Carolina All-Time Record by a huge margin (and would make her the 6th-fastest performer ever at that distance).

Two other NC athletes matched Cockrell's runner-up performance. Layla White (Cary) finished 2nd in the 400 with a time of 54.60, and Katlin Sherman (Parkland) clocked 24.05 NC #5 All-Time while taking the silver in the 200. It was a rough day for our boys, though, as none made the finals of any sprint or hurdles race.

Skip to the bottom to see all the sprint/hurdle performances by NC athletes at NBNI!

North Carolina is a Relay Power

Parkland's girls got their first taste of what a national championship feels like in June, when they won their signature race, the 4x200. Since then, they have wanted nothing more than to add an indoor win to their outdoor title, and they brought that dream to fruition Sunday. It wasn't their fastest race of the year - that was the US #1 NC #2 All-Time US #8 All-Time 1:37.75 they ran in the prelims Saturday. That doesn't matter one little bit, though, because the Mustangs are wearing the gold medals on their trip home. For the second straight day, Ebony Williams clocked a sub-24 anchor leg, and that took its toll when she had to run the hurdles not long after. I suspect that doesn't matter much, either, as the main goal of the indoor season was accomplished. 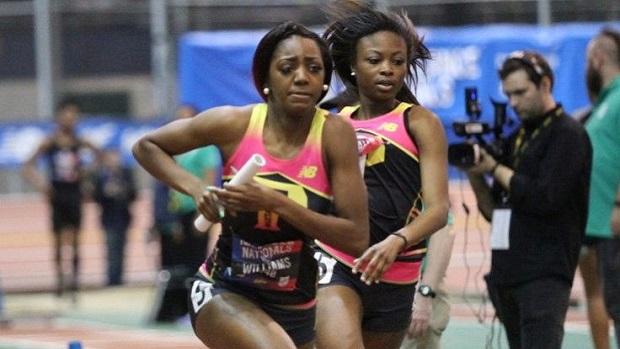 We did have one warning that Nevada Mareno was getting ready to do something special in the Mile. Taking the baton in 4th place during the fastest section of the girls 4x800, she dropped a 2:07.60 split - the fastest run by any leg of any team in the race. That powered Leesville Road to a 2nd-place finish and a North Carolina All-Time Record of 9:03.63, destroying the previous record by 15 seconds. Soccer season is already underway for Mareno, but this weekend has to give her some serious food for thought in regards to her future in running.

Two other squads joined the Mustangs and Pride among the ranks of the All-Americans. Green Hope's boys ran 3:31.02 in the opening race of the 1600 sprint medley, then had to wait through 3 more sections to find out that they had finished 6th overall. In similar fashion, Wakefield's girls clocked a season-best 3:50.95 NC #1 in the 4x400's third section, then had to sweat two more races before winding up in 5th place.

Skip to the bottom to see all the relay performances by NC athletes at NBNI!

Sydnei Murphy (Apex) actually had a bit of a rough meet, at least up until her final event. She jumped 19' 1.5" to finish 4th in the long jump, which is a good result but not the 20-foot jump that she still hopes to get. She made the semifinals of the 60 Dash and had a great start there, but couldn't seem to find her top gear and did not make the finals. She was able to shake off that disappointment, however, and produce a tremendous result in what has become her best event, the triple jump. Her mark of 42' 0.75" earned her second place, but more importantly it was a North Carolina All-Time Record.

Several other NC athletes had All-American performances over the three days of the meet. Christopher Garrick (Marvin Ridge) finished 6th in the high jump, clearing 6' 9.5". Anna Eaton (Apex) cleared 13' 0.75" to finish 4th in the pole vault,

All North Carolina Performances from NBNI