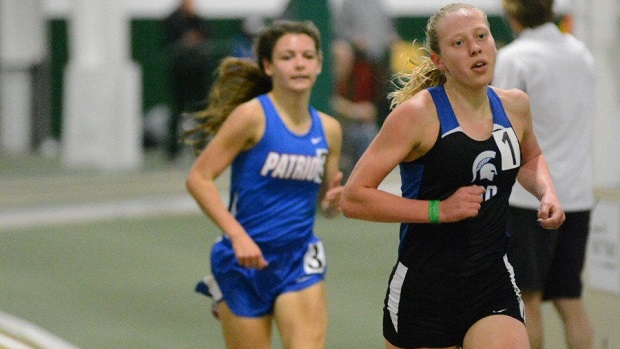 At last year's meet, Malia Ellington established herself as a national-caliber track runner.  Who will emerge with new credibility from this year's meet?

The third edition of the NCRunners Holiday Invitational kicks off at 10 AM Saturday morning, with a new format but the same high level of talent.  The Elite sections have been moved to the David Oliver Invitational, which is scheduled at a time in the season where it should be easier to recruit the top talent from the surrounding states as well as our own.  The level of competition will still be extremely high, as North Carolina's best are coming out to take on some each other and also some out-of-state competition.  Despite the big names that are entered, though, this is the first major invitational of the indoor season, so you should take some things with a grain of salt - a lot of athletes are entered at their all-time PR's, and they are NOT in that kind of shape right now.  One exception to this rule is listed below!

While all of the events have excellent talent, here are the girls' events that stand out as "must-watch" tomorrow:

You know who IS in great shape at this point in the season?  The distance runners that went to Foot Locker Nationals are in peak racing form, and two of them are in this race.  Ryen Frazier (Ravenscroft) ran a 4:44 for a full mile back in November as she prepared for a postseason run that saw her win the South Regional and finish second at the Nationals last weekend.  That makes her a prohibitive favorite in this race, but she won't be without competition: the Foot Locker runner-up will be pushed by friend and South teammate Libby Davidson (E.C. Glass, VA), who finished 6th at the nationals.  Throw in a runner like Malia Ellington (Community School of Davidson), who has been under 5 minutes numerous times, and you have a formula for Davidson's first sub-5 time.  Sophie Ebihara (Cardinal Gibbons) and Nevada Mareno (Leesville Road) could benefit from the quick pace up front to close on that mark themselves.  If not, they will find themselves in a very competitive second pack with girls like Taylor Delaney (South View) and Haley Schaeffer (Jacksonville) - the latter seems poised to go under 5:10 after a solo 5:16 earlier this month outdoors.  Sarah Bodmer (Cary Academy) is an interesting inclusion - she primarily ran the 3200 last year for Green Hope, but the NCISAA 3A state cross country champ looks to be shifting her focus this winter.

The second-fastest section should also be quite strong; depending on where meet management draws the cutoff for the final group, there could be a great push for sub-5:30, even though a number of the girls that are seeded in the 5:20's and 5:30's haven't approached those times yet this year.

When the NCHSAA officially added the 4x200 for this years' state meets, this is exactly what fans of the sport anticipated seeing: the state's three best girls' relay schools from the last few years are going head to head in both of these races Saturday.  In fact, two of them will be focusing exclusively on the relays, running on fresh legs to increase the potential for big times!  Parkland's girls finished last winter as the national champions in the 4x200, running 1:38.59, and their coach has stated his intention to go for US #1 in this race.  That shouldn't be hard, seeing as the current top time in the country is only 1:43.18.  Most of Parkland's team will graduate after this year, so they only have a few more months to set state records and contend nationally - expect them to come out with all guns blazing in their favorite relay.  Parkland will also get a boost in the 4x400 by the presence of McKinley McNeill, who didn't join the Mustangs until the spring season last year.  Cary's girls will be gunning for the relay triple, as they should dominate the 4x800 before bringing their collection of short- and long-sprint talent to play in the 4x2 and 4x4.  It looks like the latest Imp to make a big leap forward is Obomate Asimiea, who has already dropped 3 seconds off of last winter's 500 time.  Don't count out Wakefield just because they graduated some key runners; they were the top 4x400 team in the state last winter, and they have most of that squad returning, plus the Wolverines always seem to develop new talent to sustain their program.

With six girls in the competition that have cleared 11' 6" or better in the past, this event should heat up at about 11 or 11:30, and the final few heights could see some intense competition.  Alina McDonald (Carolina Homeschool SC) has the best mark this season, having cleared 12' 0" (currently US #5) at JDL last weekend, but she doesn't have the top PR in the field.  That belongs to Amanda Barnes (Beaufort SC), whose 12' 9" beats McDonald's all-time best by 3 inches.  Add in Anna Eaton (Apex), who has cleared 12 feet outdoors this winter (which is actually harder to do than indoors) and 12' 6" in the past, and you have three vaulters competing for the coveted 13-foot mark and higher spots in the national rankings.  A pair of Zoe's will be hoping to use the strong competition to get their first 12-foot jumps: Zoe Harper (Ponte Vedra FL) and Zoe Early (Apex) have cleared 11' 9" and 11' 8", respectively.  It wouldn't be very surprising to see Cassie Kowalski (Hough) or Tori Martin (Rockingham), both 11-footers, get in the mix and compete for the top 5 this weekend.

North Carolina is simply loaded with girls' hurdlers this year, and that means the talent runs very deep in this event at any invitational.  Anna Cockrell (Providence Day) is the #4 returner in the nation, having run 7.87 last winter en route to an 8th-place finish at New Balance Nationals Indoor.  Kayla Moore (Cummings) has the best current time of any NC girl entered this weekend, having run 8.26 already in what wasn't even her strongest event last year.  Regular contenders Breanne Bygrave (Wakefield), Ariel Davis (Platinum Sports), and Kylie McMillan (Southern Guilford) are all entered and ready to start pushing their times down toward the 8-second mark.  Gabrielle Cunningham (Mallard Creek) is running her first indoor race of the season, but her outdoor times seem to indicate that she is in very good shape.  There are several other strong hurdlers in the field as well, which means the competition for the last few spots in the final will be intense!

A bold prediction for this event: none of the top 6 athletes will even approach their seed times, which are a little inflated for this time of year (one imagines that the respective coaches were monitoring the entry lists and "bumping up" their athletes' seed times to try to keep them in the fastest section).  Despite the aggressive seeding, though, the talent in the race is very real.  Lydia Gamble (Durham School of the Arts) has run under 1:19 this young season, and Tia Robinson (Wakefield) ran 1:15 last winter.  Robinson's teammate, JeMay Ward, has already equaled last year's best of 1:19, and Jaleesa Smoot (Salisbury) is a highly accomplished 400 runner.  It will be interesting to see what Kristoni Barnes (Wake Forest) can do in her first indoor race ever, after clocking several 57's over the summer.  Nevada Mareno (Leesville Road) could be fun to watch here, except that her legs might be tired from the 1600 earlier in the meet, and Hannah Dunston (Knightdale) could put up a strong time from an earlier section if her outdoor mark is accurate.

This event is strong at the top, with 39-foot jumper Brittany Bowald (Atlantic Coast, FL) and 38-footer Mikaela Seibert (Cuthbertson) potentially dueling for the title.  What really sets it apart is the depth, though: athletes like Nicole Lawson (Hopewell) and teammates Kenyae Majors and Kelsia Moore (Cummings) have already gone over 35 feet this winter, and they are surrounded by talent.  Olivia Walker (Hopewell) has jumped 36' 11" outdoors this month, La'Schirrae Morrall (Battery Creek, SC) has a best of 36' 9, and Keila Robertson (Magruder, MD) was in the 35's last spring.  Nicole Greene (Ponte Vedra, FL) is one to watch, as this is her first triple jump competition (see below for more on her).

Other Athletes to Watch: