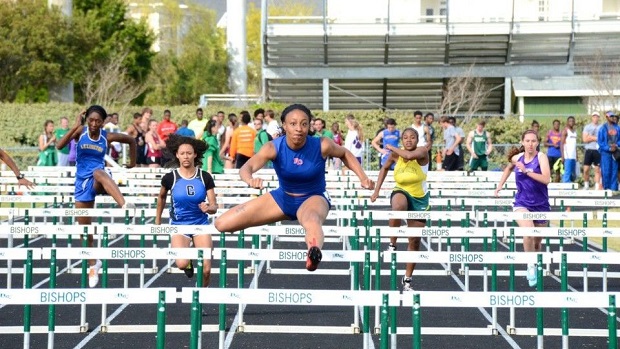 One of the best hurdlers in the country, Jasmine Quinn (Fort Dorchester, SC), will look for four golds in the Elite division Saturday.

Every NCRunners Elite Invitational is really two meets in one.  You have the full schedule of events for the Frosh/Soph Invitational (the UNOFFICIAL JV State Championship), and you also have selected Elite events where some of the state's best runners have been invited to compete.  This weekend, a new format will put them together into the same races, so that the best compete against the best regardless of divison, while still preserving the team competition for the younger runners.  Here are a few keys to understanding how the meet will work:

In addition to the battle between Jasmine Quinn and Sydnei Murphy (see below), the 200 will also feature a heated fight for the bronze medal that involves three up-and-coming stars (and after all, that is the purpose of the Frosh/Soph Invitational!).  Abra Granger (RJ Reynolds) is the 2nd-ranked freshman in the state in the 200, while Isis Brooks (East Forsyth) is the top-rated sophomore.  They will have their hands full with 8th-grader Taylor Scott (Carolina Elite), who has a wind-aided 25.43 this season, as well as her club teammate Lauren White.

The long jump should produce some excellent marks, as athletes from North Carolina get truly warm weather for the first time.  Quinn should dominate, but White is also a strong jumper, and Zarea Pitts (RJ Reynolds) has shown flashes of huge improvement over last year.

Jasmine Quinn (Fort Dorchester SC) is one of the best hurdlers in the nation, with a PR of 13.33 from earlier this season.  She is a defending long jump state championship, as well, with a mark of 19' 7.5".  Quinn will also compete in the 100 and 200, where she will have to get past North Carolina's Sydnei Murphy (Apex).  Murphy has been improving by leaps and bounds over the last few weeks, clearly rounding into great shape in time for a big postseason.

Ngozi Weddeeburn (Athens Drive) holds the top seed in the 400, and will be poised to break 59 in the perfect 80-degree weather.  Eliza Dekker (Durham Academy) will also be looking to break through a barrier, as she has not run under 2:20 yet this spring (though she has done so many times in her career).  Dekker typically doesn't start cranking out fast 800's until late in the season, so this could be a strong indicator of where she is headed in that event.

Although there are only 7 athletes entered into the 110 Hurdles, the top 4 are within 0.57 seconds of each other, and so it should be an excellent race.  Billy Murganti (Green Hope) leads the entries and will be competing for an Elite gold medal, while Kobina Johnson (Ravenscroft) is the top Frosh/Soph entrant.  Likewise for the 4x100, which will pit four squads composed entirely of sophomores and younger sprinters against each other - there's no telling which team will have the advantage in a race filled with such inexperienced athletes.

The middle distances drew some serious talent on the boys' side.  In the 400, T.J. Bleicher (Fuquay-Varina) leads a top 4 separated by less than 1 second, which should make for a very exciting fast section.  The 800 is loaded with talent, starting with Green Hope teammates Will Jordan and Brad Pehr, who have both run 1:58.  Quincy Rasin (New Bern) might decide to run the 400, but if not he and Bryan Whyms (Northside Christian) should also be in the lead pack.  In the throws, there are two 50-footers - Derrick Wheeler (North Brunswick) and Russell Corbett (Ashley) and two 130-footers: Corbett and Gabriel King (Mount Airy).

Cam Stover (RJ Reynolds) has battled older sprinters all season, so it is easy to overlook the fact that he is one of the best sophomores in the state.  He will take on fellow 10th-graders Caleb DeRoche (New Bern) and Richard Kersey (Lee Senior) in the 200, and will have to deal with the bronze medalist in the 1A/2A Indoor State Championship, Chris Graham of North Brunswick, in the 100.  Noah Lambert (Carrboro) is the top seed in the long jump and high jump, and also ranks second in the triple.  There is also a pair of Elite vaulters in Ian West (Fike) and Marshall Shank (East Rowan), both of whom will enter well after the other competitors have completed their attempts.