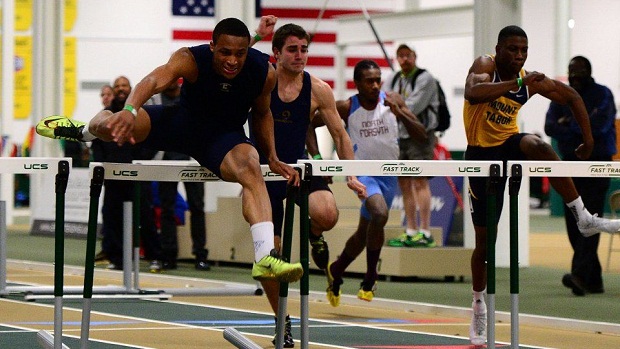 The Hugh M. Cummings senior hasn't lost a state championship race in the high hurdles over his entire career.

With my focus primarily on high school competition, I sometimes miss up-and-coming stars in the summer track ranks.  That was especially true during my first year as NCRunners webmaster, when Isaiah Moore was a freshman at Walter Williams High School.  He won the 3A state championship in the hurdles (an incredibly rare feat for a 9th-grader).  To me, it was a surprising performance, just as it startled many other fans of scholastic track & field when Isaiah began high jumping so successfully.  In truth, though, he had been hurdling and jumping since age 10, and so those achievements were not so surprising to his coaches and family.  Since then, Moore has done nothing but improve, reaching a peak (at least so far) when he earned a trip to the Ukraine for the World Youth Championships.  He entered the season as one of the highest-ranked athletes in the nation, and he hasn't disappointed, staying in the US top 5 for the hurdles and long jump all winter.  As you'll see in the interview, this is no one-dimensional athlete: like many Cummings track stars before him, Isaiah is a strong student with a clear plan of what he wants to achieve in that facet of his life.  Tradition is very important to the Cavaliers, and Isaiah has not only upheld the standards set by those who went before them, but actually raised the bar for the next generation.