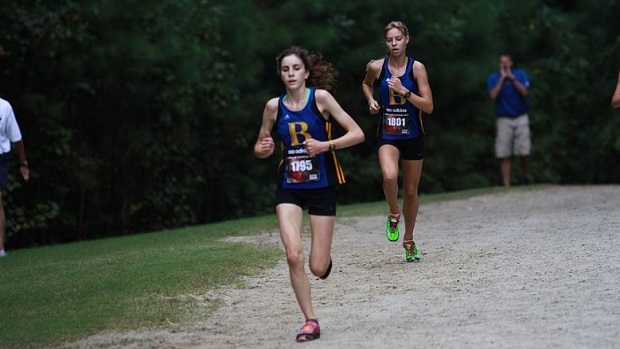 Blacksburg's girls already have one win at WakeMed on their 2013 resume, and another would be a big step toward the ultimate goal at the end of November.

Entering this race last year, Chantilly (VA)'s Sean McGorty had run 15:26 at Oatlands; he left Cary with a 14:43 course record.  I mention this to tell you that Louis Colson (Thomas Edison VA) ran 15:16 at Oatlands two weekends ago, and if the pattern holds true he could be ready to explode on the challenging but very fast WakeMed course.  Colson currently sits at number 16 in the Saucony Elite 50 Individual Boys rankings, but that could change a lot after the weekend.  The three-headed monster at the front of the Brentwood (TN) high school team - Alec Thomas, Taylor Caldwell, and Aaron Thomas - already showed they are legitimate when all three ran under 15:10 at the Trinity/Valkyrie Invitational in Kentucky.  They should get a very strong push up front from Philip Hall (Terry Sanford NC), who is 25th in the Saucony rankings.  You can also expect Brent Demarest (Porter-Gaud SC) and Austin Sprague (St. Pius X GA) to fight for the individual win, which should seem familiar to them: they battled to the finish line at the Hare & Hounds Invitational at McAlpine earlier this year.  Other candidates in a very evenly-matched potential lead pack include Zack Langston (Lexington SC), Kevin James (Cardinal O'Hara PA), Ben Huffman (Providence Day), Matthew Brafford (George Washington WV) and Patrick Gregory (Butler KY).  Whew!  That could make for a spectacular race with lots of lead changes, unless somebody from the group emerges with a breakthrough race; all 11 of those guys have times between 15:05 and 15:14 this season!

In team competition, it's shaping up to be the front-running firepower against the tight pack-running for the championship.  Brentwood (TN) is 7th in the latest Saucony Elite 50 Team Rankings, but they have a 1-5 split of 1:22, where as 11th-ranked Broughton (NC) splits just 50 seconds (and has a 6th runner only 5 seconds beyond that).  With Cardinal O'Hara (PA) coming in at 20th in the rankings and also possessing a sub-1:00 team split, this could easily turn into a three-team battle.  You can never count out some of the perennial national powers in the race, though, including Belen Jesuit (FL), St. Xavier (KY), and Saratoga Springs (NY).  St. Pius X (GA) can run with most anybody through four runners, and if they can get someone to fill the gap back to their 5th guy they might be a dark horse in this one.

Is it possible for one team to sweep all three major invitationals on the WakeMed course in one year?  The Blacksburg girls have already won the adidas Cross Country Challenge here, showing excellent early strength, and they are favored again this weekend.  All of this must certainly be preparation for a run at Nike Team Nationals, as the Southeast Regional is held, well, you know where.  The Bruins will likely get their top runner, Bonnie Angermeier, into the top 10 this weekend, and they can back it up with a 2-6 grouping that is separated by less than 20 seconds.  Watch for the big capital B in yellow on blue on Saturday, and you'll likely come away impressed.  Who can challenge the Blacksburg girls, ranked 10th in the Saucony Elite 50 Team Rankings?  North Carolina puts up their two best teams, Green Hope (known for depth and strong pack running) and Cardinal Gibbons (with a powerful duo up front and depth that is coming around).  The toughest challengers might turn out to be from the Northeast, though:  Barrington, all the way down from Rhode Island, and Saratoga Springs (NY).   In their only recorded race so far, Barrington cruised to a 40-second 1-6 split (with only 1 second separating their 2 through 6 runners!), and they sit at 25th in the national rankings.  15th-ranked Saratoga, of course, is well-known for their successes on this course in the past, and  has only raced twice this season (though they DID put 6 girls under 19 minutes for 3 miles at their first meet).

Individually, there are no Saucony Elite 50 members entered in the race, which just means that several girls have the opportunity to race their way into those rankings.  Hannah Long (Eureka MO) currently has the 14th-fastest time in the nation, and she should be challenged by several of North Carolina's best.  Ryen Frazier (running unattached, attends Ravenscroft) leads four sub-18 girls from the Tar Heel State, including Cardinal Gibbons teammates Mary Grace Doggett and Sophie Ebihara as well as Eliza Dekker (Durham Academy).  Katie Fortner (Cave Spring VA) ran 17:41 last fall, and Megan Sullivan (Broughton NC) was at 17:48; neither of them have had a true breakout race yet this season, but it could happen this weekend.  You can also include Logan Morris (Spartanburg Christian SC) and Morgan Ilse (Marist GA) among the candidates for the lead pack.  Here's an interesting sleeper candidate: Maddy Berkson (Classical RI) is a senior who is running cross country for the first time (though she has extensive track experience), and in her only race she ran 18:33 to win by 15 seconds.

Louis Colson's teammates are in this race, though he is in the Race of Champions, and that removes the man who would have been the clear favorite.  That now falls to Nik Kreiling (Jordan NC), who has run 15:31 this season.  Zach Boone (Mitchell NC) should be hard on his heels, as the junior from the foothills has run 15:37.  Kreiling's teammate, Daniel Beamer, should also be in the front of the race, along with David Fitzgerald (Winston Churchill MD); both have run 15:44.  There are four more guys who have sub-16 times on their profiles from this fall, plus several more right at 16 minutes.  In team competition, the virtual meet predicts Brentsville District (VA) as the favorite, with a tight knot of four North Carolina squads battling for second: Green Hope, Millbrook, Cardinal Gibbons, and Jordan.

Katie Fortner and Megan Sullivan are both running individually in the Race of Champions, so that removes the two top front-runners from this race.  That might actually make the race more exciting, as it will be less strung-out, and there should be a good front pack.  Brittany Whitt (Midlothian VA) and Emma Brown (Providence Day NC) lead seven girls that are under 19 this season, and the competition in that group could spur a few runners to new heights.  The team battle is shaping up as a North Carolina affair, with Pinecrest (NC) putting their pack up against a Milbrook (NC) squad that has a potent #1 runner in Emily Pettis, plus solid depth to boot.  The battle for third place in the team standings for this race looks intense, with Sanderson (NC) and Midlothian leading 7 teams scored within 33 points of each other in the virtual meet.