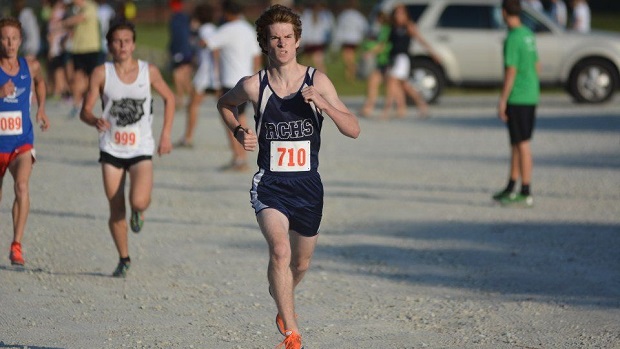 When you drop 42 seconds off of your career best in the first meet of the season, like the Raleigh Charter senior did, you tend to get noticed.

When I was looking through all the extremely fast performances from the Providence Invitational for the first time, there was one that really jumped out at me.  Chris O'Brien, a name with which I was not familliar, had run 15:51 there, finishing 12th.  A little research uncovered a previous personal best of 16:33, along with PR's of 4:38 and 10:40 in track season.  While this is not the largest leap forward that I've ever seen, it's certainly noteworthy, and I vowed then and there to get to know the Raleigh Charter senior as soon as I could.  As luck would have it, Chris was racing at the Seahawk Invitational (he finished 5th overall with a time of 16:00, showing that his season-opening race was no fluke).  After a hurried introduction that may have left him more confused than anything else, he stayed around for an interview, and now everyone in the state can be familiar with this year's surprise talent.  Chris explains some of the reasons why he has taken such a big step forward, establishing himself as a potential 1A state champion with his early-season races.  I thought he was going to be shy on camera, but it turns out that his running isn't the only suprise he had in store for me; he speaks very well and seems quite comfortable with the success he has had, using it to continually update his season goals.  It's amazing to hear him talk about running 15:30, over a minute faster than his junior-year mark, with such confidence!