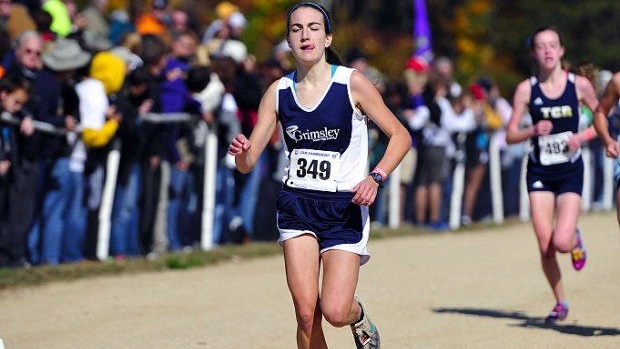 Tori Churchill will be missing one of her running mates this fall, but she still leads a strong and rising Grimsley team.

I'm sure a lot of our knowledgeable fans will be questioning this placement, as the returning Grimsley runners would seem to deserve a much higher ranking.  Unfortunately, Gaby Maudiere has moved back to California, where she ran during her freshman year.  Even without her, the Whirlies still return 5 girls who average just under 20 minutes, which gives them a good chance to advance out of the 4A Midwest and could put them on the verge of the top 10 in the 4A state meet.  Tori Churchill returns as the #1 runner, and Blair Ramsey had an outstanding winter and spring track season, which could herald significant improvement this fall.  Grimsley needs to develop depth now more than ever, so hopefully their successes over the past school year have attracted more participants.  The improvements of Sydney Gilstrap (5:33) and Mary Katherine Gwynn (12:45) could actually leave the Whirlies better than they were last year, even with the loss of such a strong runner.

The loss of last year's top runner, Jennie Cunningham, definitely hurts the Patriots.  However, it leaves behind a different kind of team, one that will depend on pack cohesion to succeed.  That pack goes 6-deep, and the split is tight (particularly between their 2-6 runners).  As an added indicator, very few teams showed as much depth during winter and spring track season as Pinecrest: they finished in the top 6 in the state for the winter and spring 3200 team rankings.  Based on those track results, it looks like Mulloy Manning is going to challenge Jaleigh Jensen for the #1 spot, which gives the Patriots a valuable safeguard against the inevitable off-day from one or the other.  One more bonus: this is a senior-heavy team with a ton of experience, and if those seniors are committed over the summer this squad could be top-10 in the 4A state meet.

The positives are very strong for this team: returning #1 Emma Brown had an excellent spring season, and the team as a whole ranked 5th in the state in team 3200 scoring.  At first glance, the major obstacle would appear to be depth, as there is a big gap between the Chargers' 4th and 5th returners.  Look a little deeper, though, and you can find several girls from the outdoor track team that were not in last fall's top 7, but have the potential to boost the cross country squad.  Niki Plaus ran 5:21 for the 1600, and Providence Day has a trio of youngsters that ran between 12:31 and 12:41 for the 3200 in Sarah Richman, Samanthan Huffman (recognize that name?), and rising 8th-grader Clare Landis (she could compete for the varsity under NCISAA rules, but Providence Day, like all CISAA schools, does not put 7th- or 8th-graders on the high school team).  Plaus is running cross country for certain, and if even one of the other three pans out as a top-7 runner this team could end up being 6-deep in sub-20 runners.  If so, the Chargers will end the season much higher than this ranking; for now, though, it's simply too hard to project where those newcomers might fit in.

The good news: the Patriots return Blake Dodge, who struggled through a nagging injury last fall and should be back to top form, threatening the 18-minute mark.  Interestingly, even without the 2011 3A state champ, her teammates still cracked the top 10, which is a big sign of the overall improvement they've has made in the last two years.  The bad news: Katie Cease has graduated, and West Carteret has a depth problem that could derail a promising season if any of the top 5 get injured.  More good news: several of the returning squad showed significant improvement during the spring season, from Madeline Fischer's 5:36 to Samantha Schleiker and Emma Gomez running solid mid-12's in the 3200.  If healthy, this team is top-5 caliber in a strong 3A classification, and could sneak into the top 3.  Did I mention they have the state's best closer as their #1 runner?

This has been a program on a steady rise over the last three years: 11th in the 3A state meet in 2010, 9th in 2011, and 5th last fall.  Based on returning talent, the Bulldogs are on target for something in the 4th - 7th range this fall, with front-runner Natalie Andrejchak in the conversation for individual title contenders.  Depth could be a bit of a problem if the top 5 girls don't stay healthy, though, and any of the top 3 would be especially tough to replace.  Robinson's girls need a strong summer to prove that they haven't reached their ceiling already.

One of the stronger programs in the state over the past six or seven years, this team has been hit hard by graduation.  There is still talent, though, and good depth (especially considering the size of the school).  The one weakness in the returning team appears to be the large gap between their fourth and fifth runners; if one of the Hawks' depth runners can step up to fill that spot, they will be contenders in the NCISAA 3A division.  That improvement will have to come over the summer: although Latin's top three showed good development during track season, there wasn't much from the rest of the returning top 7.

Lately, Weddington has been able to manufacture solid teams on both the boys and girls side, even when it seems like graduation will drop them down a peg or two.  That seems to be the product of a strong summer program, as their development during the winter and spring doesn't really jump out at you.  Morgan Garrett could be the latest in a string of good #1 runners for the Warriors if she has bounced back from a bit of a rough spring season.  This team has real depth, too, in that there is always someone else right behind each runner, which helps to take the pressure off and allows for more consistent team performances, even as individuals have good or bad days.  If these girls buy in over the summer, expect Weddington to continue their string of state meet appearances.